Huge Stripe On The Sun - Is Earth In Serious Danger?

Now astronomers have discovered huge dark strip on the surface of the Sun. It is estimated this filament is about 800,000 km in length!

Astrophysicists presume dark spots on the Sun are areas where the temperature is lower. However what we see here is not a normal sunspot and it is growing at an alarming rate.

According to researchers the region has increased to almost one million kilometers in just three days. 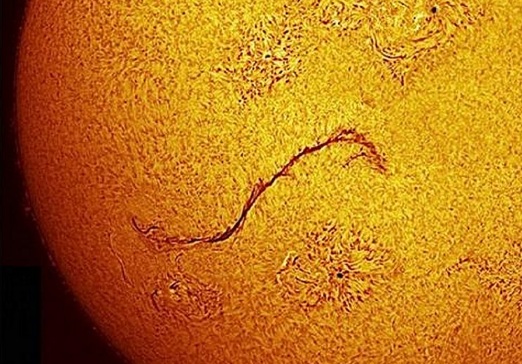 Hmm, I'd like to get some of those "Nothing to see here, move right along" opinions on this one...

I don't like the "growing at an alarming rate" part. At all.
edit on Fri Aug 10th 2012 by TrueAmerican because: (no reason given)

The Sun has it's own weather patterns ..

But I'll let someone who knows a bit more than me give their opinion, mine isn't too strong.


It could be where planet X (Nibiru, or whatever else you want to call it) is coming out of the sun from!!!

Anyways......What do you think is happening there? I am not really educated enough on the sun to even post an actual response....

I know the sunspots are the cooler areas and all, but if the sun is cooling down at all of that length, then why is it so freaking hot here??!!
edit on 8/10/2012 by Chrisfishenstein because: (no reason given)

compare it to the several visible here:
filaments

compare it to the several visible here:
filaments

NAILED IT .. good reply, compared to those.. this picture looks rather boring ..

Interesting none the less. When you think of the most inhospitable places the surface of the Sun is near the top of the list, just like the event horizon of a black hole

As a side note this feature on the sun, as others have mentioned, is quite common, the conditions appear to be right that a uncommonly long stand has become visible
edit on 10-8-2012 by MDDoxs because: (no reason given)

Why would the earth be in danger because the sun has a dark line?

NASA forecasts that in September 2012, there will be outbreaks of unprecedented power. We can expect huge solar flares that can have serious effect world-wide. Commenting on the study of the dangers of "space weather", astrophysicist Daniel Baker claimed that the effects will be comparable to a nuclear war or the fall of a giant asteroid.

However, in terms of power grids and satellites, it's not the flares that the experts have to worry about, but the CMEs. There is a risk that one day, they can wipe out all of our electronic civilization. Solar storms can disrupt communication, and navigational equipment, damage satellites, and even cause blackouts by damaging power plants and electrical grid components. They can also bring additional radiation around the north and south poles; and this, in turn forces airlines to reroute their flights. According to a report published by NERC, the North American Electric Reliability Corporation, or NERC, which oversees North America's power grid we can feel the effects for several years to come. "Historically large storms have a potential to cause power grid blackouts and transformer damage of unprecedented proportions, long-term blackouts and lengthy restoration times, and chronic shortages for multiple years are possible," the report said.

Due to my lack of knowledge, I will hold my tongue as to what I believe is happening. With that said, something is happening. Cliche as it is, we live in interesting times.

I'll definitely be keeping track of this one. Thanks OP.

EDIT: Forgot to add, the above quotes are from the main article OP linked, just to clarify.
edit on 10-8-2012 by RomeByFire because: (no reason given)

posted on Aug, 10 2012 @ 12:59 PM
link
Is this really something to be worried about? Remember a few months ago when there was that GIANT triangle dark spot in the sun? The area of that triangle looked much larger then this swirly wirly vortex of doom!


So in other words, this is just another one of those hyper-fearmongering stories, probably to sell something...

Move right along folks, nothing to see here... It's a filament. Even if it IS growing at an alarming rate.


NASA forecasts that in September 2012, there will be outbreaks of unprecedented power. We can expect huge solar flares that can have serious effect world-wide. Commenting on the study of the dangers of "space weather", astrophysicist Daniel Baker claimed that the effects will be comparable to a nuclear war or the fall of a giant asteroid.

We really need to learn to efficiently harness solar power ... the sun has enough energy to solve all of our energy needs ..

"We should be very afraid, the sun is really hot"

It sells on ATS.


It is fair to say it is huge as they are indeed huge in comparison to things we are familiar with. Do I believe that this filament is alarmingly huge or particularly dangerous due to its size, no. Do I think that the OP article is fear mongering yes.

that's just me you have fun with it