Here is a cool little Java thing I found today. It is called Ground Zero II. You can click on any area in the world and see what the effects of a nuclear bomb would be in that area. You can change the reading from thermal, pressure and fallout. You can also change what type of weapon is used.

I am close to WPAFB and figure this would be a definite target if the nukes begin to fly. I used a DF-31 (140 Kilotons) from China. OUCH!! 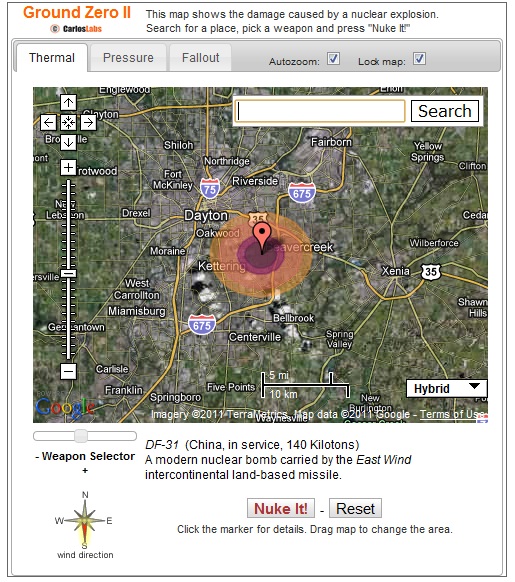 posted on Nov, 29 2011 @ 06:36 PM
link
considering each intercontinental ballistic missile can carry up to 10 mirvs (multiple independently targetable reentry vehicle) that can pepper a city or target the 10 largest cities in each state, the ground zero blast radius generator actually gives hope.

in reality, if there was a nuclear war with china or russia, your state would be obliterated with one or two of these icbms.

and the majority of the population dying of radiation poisoning. you can buy all the overpriced iodine on ebay, it's not going to help.

nuclear war is the end of the world as we know it.


It's on the program. Click all the way to the right on the weapon selector. Then click one back.

Originally posted by iamhobo
I'd like to see the Tsar Bomb (50 megaton) on that program.

Here you go. I had to zoom out to get the whole thing on the screen. Quite a bit of difference eh?
That is one scary ass bomb! 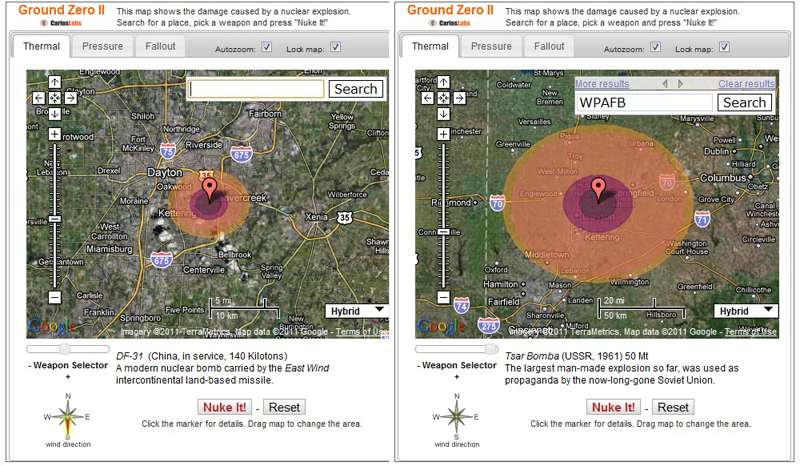 The Tsar Bomba takes out all 5 boroughs of NY, Nassau county, Westechester and half of Jersey!

Thank goodness the cold war ended when it did.

Scary stuff that Tsar Bomba
edit on 29-11-2011 by spinalremain because: (no reason given)


Yeah.. it's not a sensible weapon though.
It took so much money and resources and actually wouldn't be as effective as multiple smaller weapons. It's an all your eggs in one basket kind of thing.

What I was trying to say was that the prospect of any atomic war is just too awful.

While a 50 megaton Tsar bomba would be ludicrous, it sure is just as bad if we were to have 40 or more 10 megaton Hydrogen warheads slamming major cities. When you look at the situation from our perspective, mutually assured destruction really is the one and only prevailing idea.

I suppose this is why the threat of terrorists and radical states like Iran are scaring the Pentagon when it comes to homeland security. An atomic war in 2012 with these Hydrogen bombs is indeed scary and enough to destroy us all and half the plant life on the planet as well most likely.

Here's to hoping there will not be one. I think there will be another atomic detonation in wartime before I die, but I hope I'm wrong.


For the fallout radius. That doesn't mean only that area that is colored would be affected does it? I thought the cloud of radiation would travel with the wind and stuff?


There is an option, if you click on the fallout tab, that shows where the fallout would go. You can also adjust the wind direction and speed so the area on the map would change.

I would put up a pic but I am too lazy to do it right now. It's not that difficult to do. Just clicker click on the fallout thing. Play around with it.