posted on Nov, 22 2011 @ 08:13 PM
link
November 22, 2011 — MEXICO CITY — Mexican officials have unveiled plans to slaughter some 50,000 wild boars that have crossed the border from the United States and now threaten agriculture in Mexico. The Ministry of Environment in Chihauha state said some 1,500 hectares (3,700 acres) of farmland in the border town of Ojinaga have been affected by the large number of feral pigs that have come from Presidio County, Texas. “We must get rid of these European wild boars because they sleep overnight on US soil during the day and cross over to the Mexican side to feed,” Ignacio Legarreta, a state official, told local media. The boars of European origin, which were imported to Texas as pets and then replicated in the wild, have caused serious damage to the flora and fauna of the area, officials said. “They have reproduced to reach more than 50,000 animals that threaten the area,” said Legarreta. The authorities intend to use cages with food inside to trap the animals. -AFP
www.google.com... 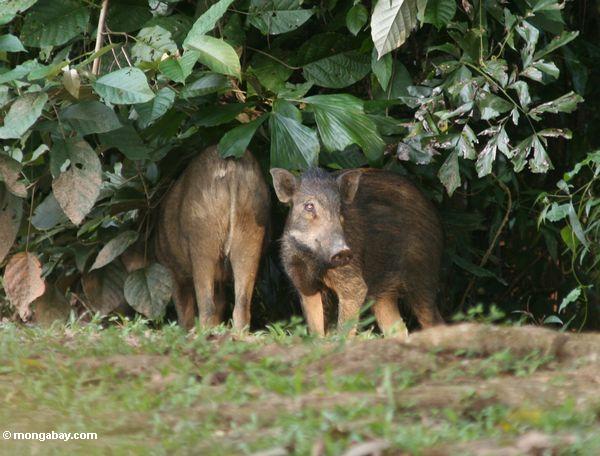 I know this is probably serious, but I find this humorous. We get their illegals and they get our pigs.

posted on Nov, 22 2011 @ 08:21 PM
link
Haha. When you said "feral pigs overrunning the border" I thought you were talking about the illegal immigrants.

Oh, I know. Think of all the yummy sausage.

posted on Nov, 22 2011 @ 08:29 PM
link
Oh, I so needed the laugh. I have no problems with Mexicans, I do have one with illegal immigrants as a tax payer though. The thought of 50,000 pigs eating their "flora and fauna" is somehow satisfying to me.

Originally posted by OmegaOwl
Damnit, we should trade
All that Bacon and ham, the price could have dropped.

HEY,, i resemble that remark


LOL, not sure if I should feel bad or good seeing your avatar and siggy. Cute piggy though!


Mexico is infested with guns, are the farmers the only ones unarmed?

it seems to me if there is a problem, they could eat it in a week.

posted on Nov, 22 2011 @ 10:27 PM
link
Sounds like a great opportunity to stock up some of the soup kitchens. Pigs are too yummy to let them run around all wild and stuff.

1. They were just going into Mexico looking for a better life for their piglets.
2. They are hardworking and the Mexican economy would fail if they were sent back.
3. They are doing the jobs that Mexican pigs won't do.
4. Pigs should be allowed to immigrate freely, why the need for borders.

posted on Nov, 23 2011 @ 09:02 PM
link
Can there really be 50,000 pigs running together acrossed the border and back? Do they know it is illegal to cross the border? Thats a lot of PIG… Is there a sign? Is it both Spanish and English? Can I shoot one with a “fast and furious” gun? If you think about this story, there are a million questions.
edit on 23-11-2011 by moondancer811 because: (no reason given)