People dancing until they die... 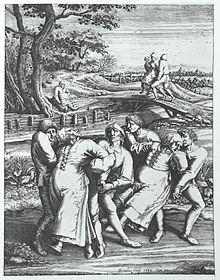 It started mid July when Frau Troffea stepped out into the street and started to dance..Within a week about 100 people had been consumed by the same irresistible urge to dance.. It eventually grew to a group of around 400..

This lasted for about one month, some people eventually died from conditions such as heart attacks, strokes, or exhaustion.

As the dancing plague worsened, concerned nobles sought the advice of local physicians, who ruled out astrological and supernatural causes, instead announcing that the plague was a "natural disease" caused by "hot blood."

However, instead of prescribing bleeding, authorities encouraged more dancing, in part by opening two guildhalls and a grain market, and even constructing a wooden stage. The authorities did this because they believed that the dancers would only recover if they danced continuously night and day. To increase the effectiveness of the cure, authorities even paid for musicians to keep the afflicted moving.[2] Some of the dancers were taken to a shrine, where they sought a cure for their affliction.

This is the best documented case but is not the first.. In fact, there had been as many as ten dancing epidemics previously.

-The earliest known outbreak of dancing mania occurred in the 7th century..

-in 1278, an incindent involved about 200 people dancing on a bridge over the River Meuse in Germany, resulting in its collapse.

-Between 1373 and 1374, incidents reported in England, Germany and the Netherlands.. were the first major outbreaks.

-On 24 June 1374, a big outbreak began in Germany it then spread to other places like Cologne, Flanders, Franconia, Hainaut, Metz, Strasbourg, Tongeren, Utrecht, Italy, Luxemburg.

-Further episodes occurred in 1375 and 1376, with incidents in France, Germany and Holland

-1381 there was an outbreak in Augsburg.

-in 1428 a group of women in Zurich were reportedly in a dancing frenzy.

-In the 17th century, incidents of recurrent dancing were recorded by professor of medicine Gregor Horst.

Then dancing disease seems to have completely died out by the mid-17th century..

what could have compelled these people to dance until they died? Some theories include..

Mass hysteria
the poor of Strasbourg were experiencing famine, disease and spiritual despair..
Ergotism
An idea that the dancers had ingested ergot, a psychotropic mould that grows on stalks of rye.
A Cult
Improbable because the afflicted did not want to dance and the dancers themselves, when they could, expressed their misery and need for help.


Whatever the explanation it still remains a mystery...

If something like this happened today, people would freak out, lol.

I know that even babies have rythem and like to move to beats - so perhaps dancing is something inside all of us that is hard wired?

What do you think caused this?

I have a hard time thinking it was mass hysteria - especially if people did it until they died.

But then again - this was way back in time, and it could have been part of an elaborate prank?

Who knows - but truly interesting.

Start and flag for you - unique topic.

All joking aside what a fantastic thread. Compliments to you. VERY interesting stuff... S&F!

And within the theme of the thread: One of my favorites!

It seems it occurred more in Europe. Strange...

I refer you to the above link. I was going to quote from it, but it won't let me.

But in a nutshell it is believed some people did the tarantula dance, either as an after effect of being bitten or as a way of forcing out the venom.

May not be related, but a good read though.

posted on Nov, 22 2011 @ 11:58 AM
link
Sound to me like a simple case of Ergot poisoning. This used to happen a lot all over Europe in the middle ages

Ergot or ergot fungi refers to a group of fungi of the genus Claviceps. The most prominent member of this group is Claviceps purpurea. This fungus grows on rye and related plants, and produces alkaloids that can cause ergotism in humans and other mammals who consume grains contaminated with its fruiting structure (called ergot sclerotium)

Ergot or ergot alkaloids are the base from which '___' is made from and it causes mass hallucination and all the other strange behavoiur associated with people who are 'tripping'. Its reported that the spread of ergot poisoning is what might have sparked off the Spanish inquisition.

The convulsive symptoms that can be a result of consuming ergot-tainted rye have also been said to be the cause of accusations of “bewitchment” that spurred the Salem witch trials. This medical explanation for the theory of “bewitchment” is one first propounded by Linnda R. Caporael in 1976 in an article in Science. In her article, Caporael points out that the convulsive symptoms, such as crawling sensations in the skin, tingling in the fingers, vertigo, tinnitus aurium, headaches, disturbances in sensation, hallucination, painful muscular contractions, vomiting and diarrhea, as well as psychological symptoms, such as mania, melancholia, psychosis and delirium, were all symptoms reported in the Salem witchcraft records. Caporael also notes the abundance of rye in the region as well as perfect climate conditions for the tainting of rye

Ergotism is the effect of long-term ergot poisoning, traditionally due to the ingestion of the alkaloids produced by the Claviceps purpurea fungus which infects rye and other cereals, and more recently by the action of a number of ergoline-based drugs. It is also known as ergotoxicosis, ergot poisoning and Saint Anthony's Fire. Ergot poisoning is a proposed explanation of bewitchment.


The only problem with the ergot theory is, although it can trigger delusions and spasms, it also cuts off the blood supply.. which would make coordinated movement very difficult..


Theres lots of references of dancing due to ergot poisoning on google.

In those years where the winters were cooler, Rye would be more likely to survive than wheat. This made it more likely that Rye would be consumed, and while the Rye survived the cold temperatures, the plants were traumatized and were more susceptible to infections by Ergot. Evidence that Ergot poisoning was occurring was based on reports of nervous system disorders. In summer of 1355, there was an epidemic of “madness” in England. People believed that they saw demons. In 1374, a wet year, marked by a lack of food, there was an outbreak of hallucinations, convulsions and compulsive dancing in the Rhineland.

ERGOT.... ’Claviceps purpurea‘, a fungus that affects cereals, especially RYE. It is a toxic alkaloid that causes convulsions and hallucinations.
It is believed to be the cause of the illnesses ‘St. Vitus Dance’ and ‘St. Anthony’s Fire’.

Dancing mania was a social phenomenon that occurred primarily in mainland Europe between the 14th and 18th centuries; it involved groups of people, sometimes thousands at a time, who danced uncontrollably and bizarrely. Men, women, and children would dance through the streets of towns or cities, sometimes foaming at the mouth until they collapsed from fatigue.

Although no real consensus exists as to what caused the mania, some cases, especially the one in Aachen (Aix-la-Chapelle), may have had an explicable physical cause. Some of the symptoms of the sufferers can be attributed to Ergot poisoning, or ergotism, known in the Middle Ages as "St. Anthony's Fire". It is caused by eating rye infected with Claviceps purpurea, a small fungus that contains toxic and psychoactive chemicals (alkaloids), including lysergic acid and ergotamine (used in modern times as a precursor in the synthesis of '___'). Symptoms of ergot poisoning include nervous spasms, psychotic delusions, spontaneous abortion and convulsions and gangrene caused by severe vasoconstriction; some dancers claimed to have experienced visions of a religious nature.

posted on Nov, 22 2011 @ 12:39 PM
link
Thanks Misterlondon for this post , the fact that it seems to prevail in Europe and also the ergot theory seems to be a busted flush regarding cuts off the blood supply . Ecstasy would be the first point of call today LOL .

I offer up another potential possibility ...

Vitamin D deficiency ... [mice are often used as labrats in experiments that leads to benefits in medicines for humans]

Abstract
Vitamin D is a neuroactive steroid hormone with multiple functions in the brain. Numerous clinical and experimental data link various Vitamin D-related dysfunctions to epilepsy. Here, we study the role of Vitamin D receptors (VDRs) in experimental epilepsy in mice. To examine this problem, we assessed the seizure profiles in VDR knockout mice following a systemic injection of pentylenetetrazole (70 mg/kg). Overall, compared to the wild-type (WT) 129S1 mice (n=10 in each group), the VDR knockout group significantly demonstrated shorter latencies to the onset, higher Racine scores and increased mortality rates. Our findings suggest that VDRs modulate seizure susceptibility in mice, and that the Vitamin D/VDR endocrine system may be involved in the pathogenesis of epilepsy.

Source of above quote. [ncbi.nlm.nih.gov]

Or might they be multiple cases of mass chemically induced epilepsy?

Personal Disclosure: OL has no clue as to the viability of either the above to mentioned extra potential causes and I wonder if it might be a combination of factors including the weather during those events?


Bear in mind during this particular case which is well documented.. Doctors and physicians witnessed this first hand and studied their behavior..

This is actually from your first source...


Convulsive ergotism is characterized by nervous dysfunction, where the victim is twisting and contorting their body in pain, trembling and shaking, and wryneck, a more or less fixed twisting of the neck, which seems to simulate convulsions or fits. In some cases, this is accompanied by muscle spasms, confusions, delusions and hallucinations, as well as a number of other symptoms.

In gangrenous ergotism, the victim may lose parts of their extremities, such as toes, fingers, ear lobes or in more serious cases, arms and legs may be lost. This type of ergotism causes gangrene to occur by constricting the blood vessels leading to the extremities. Because of the decrease in blood flow.

Its doubtful this set of symptoms be confused by anyone especially doctors as people dancing, It would also make any type of coordinated movement for a length of time as virtually impossible. Remember some of those people were dancing non stop for days, This thing lasted a month in total.


The reference St Vitus dance comes from St Vitus being the patron saint of dancing.. Vitus is invoked against diseases including epilipsy, nervous disorders.. The word dance is not meant to be taken literally.. the symptoms of this are wild, jerky, uncontrollable movements..

Whilst ergotism could be a logical explanation for some of these outbreaks, It doesnt seem to fit with this particular story..

Maybe it was in something like the water supply hah


Maybe , its hard to tell from the small amount of info we have on the incident.

Its worth noting while the advanced stages of ergotism might make the people effected to ill to dance its clear the early stages of ergot poisoning make some people want to dance about as its well documented. Some of the people danced for several days and died of exhaustion and the whole episode went on for about a month as more people seemed to become infected. Thats not the same as each person dancing for a month at a time.

Erogtism happens after sustained ergot poisoning over a period of time. Not everyone who ingests ergot and has a crazy episode will go on to develop full blown ergotism and the reduced mobility that is the symptoms in the later stages. Ergot poisoning was rife in the area in those days.

Shame we cant dig them up and do a tox-screen , sounds like a case for CSI