By DON CUDDY
doncuddy@s-t.com
November 21, 2011This fish story may lack the epic qualities of Ernest Hemingway's 1952 classic“The Old Man and the Sea,” but for New Bedford's Carlos Rafael, the outcome was about the same. In both cases, despite capturing and bringing home a huge fish, powerful circum­stances conspired to deprive the luckless fishermen of a potentially huge reward.

Boat owner Rafael, a big player in the local fishing industry, was elated when the crew of his 76-foot steel dragger Apollo told him they had unwittingly captured a giant bluefin tuna in their trawl gear while fishing offshore.

“They didn't catch that fish on the bottom,” he said. “They probably got it in the mid­water when they were setting out and it just got corralled in the net. That only happens once in a blue moon.”

Rafael, who in the last four years purchased 15 tuna permits for his groundfish boats to cover just such an eventuality, imme­diately called a bluefin tuna hot line maintained by fishery regu­lators to report the catch.

When the weather offshore deteriorated, the Apollo decided to seek shelter in Provincetown Harbor on Nov. 12. Rafael imme­diately set off in a truck to meet the boat.

“I wanted to sell the fish while it was fresh instead of letting it age on the boat,”he said.“It was a beautiful fish.”

It was also a lucrative one. Highly prized in Japan, a 754­pound specimen fetched a record price at a Tokyo auction in January this year, selling for nearly $396,000. These fish can grow to enormous size. The world record for a bluefin, which has stood since 1979, was set when a 1,496-pound specimen was caught off Nova Scotia.

However, when Rafael rolled down the dock in Provincetown there was an unexpected and unwelcome development. The authorities were waiting. Agents from the National Oceanic and Atmospheric Administration's Office of Law Enforcement informed him they were confis­cating his fish — all 881 pounds of it.

Even though the catch had been declared and the boat had a tuna permit, the rules do not allow fishermen to catch bluefin tuna in a net.exnews](visit the link for the full news article)

posted on Nov, 22 2011 @ 06:34 AM
link
I feel this is a bit much..my reasoning is ..it's not like he was fishing illegally as he had the permits needed.
The problem was that this rare incident involved catching the large tuna in a net,which is not permitted.
Timing has got to be a huge issue and even if he gets the tuna back what will be the value of an agaed fish?

www.capecodonline.com
(visit the link for the full news article)


Since it was confiscated, hope they atleast move on getting it processed before its aged, and and of much less value.


Big buckets of bummer!
The very least they could do is allow him to sell it and if "the law" finds that he was in violation, the catch money goes to the state or feds or county or whomever the "robber" is.
Otherwise let him keep the cash from his "fish lotto".
Thats alot of chicken of the sea.


That would be an intelligent option...wonder why that wasn't considered?
I just hope the cats that end up eating this tuna once it gets old,really appreciate it

posted on Nov, 22 2011 @ 07:15 AM
link
Some thief that steals from Gaia not to feed his family but to profit instead. It's a tad too much to claim what isn't yours but to not see your errors is perhaps even worse.

Now one can say in this distorted realm he feeds the families of many but that's just a filter that does not apply in the less distorted one and thus invalid.

posted on Nov, 22 2011 @ 07:28 AM
link
With a projected value at nearly half a million, no wonder the authorities found a reason to "seize" the fish... And that way, there's no risk the catcher will spend money if it is ruled it was an illegal catch...

I wonder if the captain will put a hook in the fish, if it ever happens again...

We can imagine that he was informed from the boat of the catch as the net was pulled. Regardless, the crew knew what to do, both legally and illegally. Yes, he went through some of the motions required, but he damned well knew that he had an illegal catch on his hands. Undoubtedly, the possible value of the prize was worth his risk of continuing to market the catch. I know, I know, commercial fishing is a tough business these days and gets tougher every day, stil...

The fish should have immediately been released.


You've got a point! I didn't think of that in those terms. Thanks!

But if the authorities didn't release it, does it mean it was dead when the fishermen found it in the net? Then that would have been a waste. From a human point of view.


you have to wonder if they will do just that..next time shoud it happen again.
it was by accident and possibly already deadI think most people would have done the same.
Talk about seeing money slip away. I bet he was already thinking of ways to spend it.
Thanks for the post
edit on 22-11-2011 by wutz4tom because: (no reason given)

posted on Nov, 22 2011 @ 08:09 AM
link
If they caught it in the net in midwater as they were setting out, the fish was definitely dead when they brought it aboard. They had the specific license just in case, as obviously this had happened before, once in a blue moon. They caught the bluefin by accident, but it's already dead. These fish don't school up, so it is almost impossible to catch them in a net except by accident. Or a gill net, the "wall of death" which just annihilates everything. For the idiotic govt to seize it is just unbelievable.

Freshness is important in fish. It is only worth all that money on the day it is caught. They will fly it to Japan where it can fetch $600 a pound or more at auction in Tokyo as sushi. I doubt govt bureaucrats will take it straight to the auction, they need to file papers in triplicate and shuffle them about for days, and get authorization from fifty other bureaucrats before they can get anything done.


while I do agree that illegal is illegal...but I get the impression it was an unintentional catch. This is not a hunter spotlighting dear. He had the permits but it just so happens the way it was caught was illegal.
thnx for the post

Originally posted by CaptChaos
They caught the bluefin by accident, but it's already dead. These fish don't school up, so it is almost impossible to catch them in a net except by accident. Or a gill net, the "wall of death" which just annihilates everything. For the idiotic govt to seize it is just unbelievable.


Another example of Gov. control...that will most likely go unnoticed. The money if received by the fisherman will possibly have been spent (go back into the economy).....Now a much lesser amount will go where??


and the moral of this story is:

don't tell the government anything.
especially if half a million is involved

New Bedford Ma. is such a rockin town... 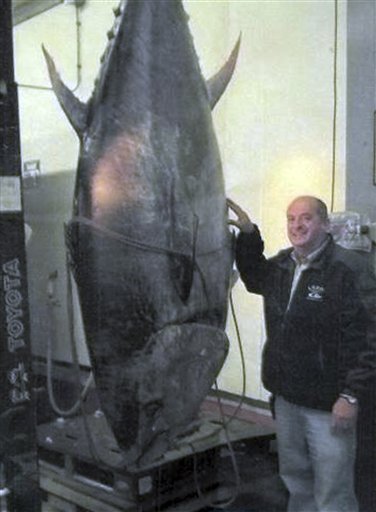 can't even argue with that...