"You raise em, we cage em" Schools police union in trouble for slogan on thier shirts

posted on Nov, 1 2011 @ 03:00 PM
link
So, I have to ask, is this another blatant attempt of the police overstepping their boundaries, or is it just an attempt at humor? Some people don't think its very funny, although there is some truth in their reasoning.
heres another article about it that has a picture of the shirt...www.sacbee.com...

A Northern California school police officers union has angered a town after it sold T-shirts with a picture of a child behind bars and the slogan: "U raise 'em, we cage 'em." Town leaders said the fundraising shirts are highly offensive and fuel mistrust of the Twin Rivers Police Department in North Highlands, the Sacramento Bee (http://(link tracking not allowed)/sDbEnl ) reported Tuesday. "Unfortunately, this shirt seems to confirm that this is who Twin Rivers Police are and how they think, or at least some of them," Derrell Roberts said. "This doesn't speak highly of the culture of this department."

The Twin Rivers Police Officers Association officials said they came up with the T-shirt idea in 2009 to raise money for fallen officers. Less than 30 shirts were ordered and most were sold for $12 to union members. Association President Arlin Kocher said the shirts were a mistake and that the union stopped selling them this summer at the police chief's request. "I don't think this will be received well by the public, which is why we stopped selling them," Kocher said. "Our union, especially me, take full responsibility." The Sacramento-area department has been under increasing scrutiny since one of its officers was shot four times on Oct. 22. The suspected shooter died hours later.

The department, which has 20 sworn officers, has had three cases in which officers shot and wounded suspects in the past two years, according to the Sacramento Bee. Twin Rivers Unified Superintendent Frank Porter, who oversees the police department, said officials are meeting to decide whether to take disciplinary action. "I am deeply disappointed that any of our employees would produce anything like that, even in their off time," Porter said.

Originally posted by Lemon.Fresh
Reply to post by Veritas1

sounds good to me after all as the old saying goes, if you cant do the time don't do the crime

Originally posted by Lemon.Fresh
Reply to post by Veritas1

Might tell the parents to keep their kids off the streets at night. 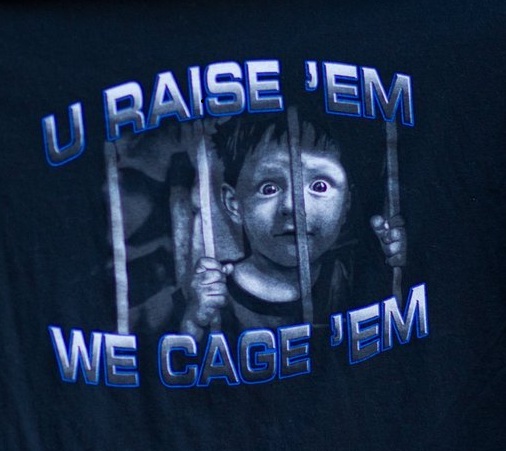 posted on Nov, 1 2011 @ 09:06 PM
link
You guys have school police? Are you serious?
In Australia we have the police go to a school on the odd occasion.
Dont take offence but what is so wrong about your society that you need school police?
Is it your gun control? Is it the size of population? It's just a strange concept to me.
Do americans care about the fact their schools need cops?
I'm just wondering thats all

I can think of a place where i'd put those shirts.....