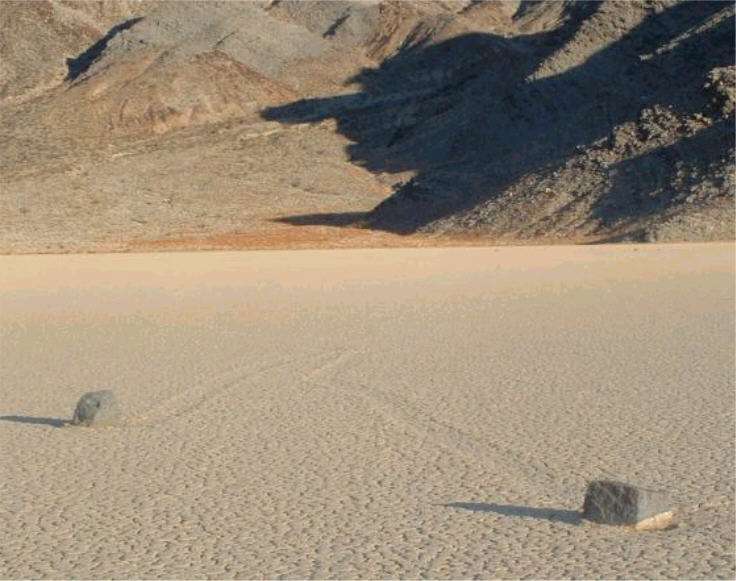 Seems like a team of five scientists have found a plausible explanation on how it is done, extract:

We suggest that the existence of many of the rock-carved trails at Racetrack Playa in Death Valley National Park is predominantly due to the effect of arbitrarily weak winds on rocks that are floated off the soft bed by small rafts of ice, as also occurs in arctic tidal beaches to form boulder barricades. These ice cakes need not have a particularly large surface area if the ice is adequately thick-the ice cakes allow the rocks to move by buoyantly reducing the reaction and friction forces at the bed, not by increasing the wind drag. The parameter space of ice thickness and extent versus rock size for flotation is calculated and found to be reasonable. We demonstrate the effect with a simple experiment. 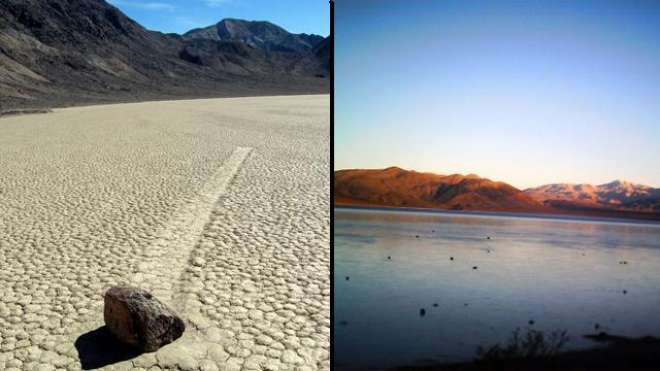 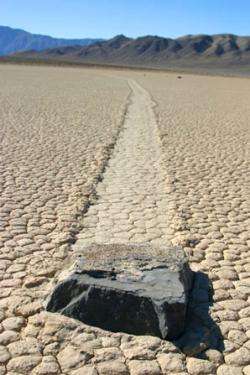 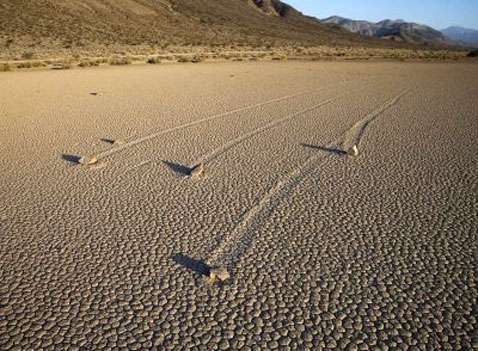 
I could be wrong but I think we're talking about dew freezing and thawing daily, so it wouldn't take decades.

Originally posted by againuntodust
Can this be related to egyptian pyramids somehow?

Care to elaborate? Do you mean related to how they were built?

posted on May, 11 2011 @ 03:52 PM
link
elevenaugust, for once I'm very happy to see another thread on a topic when there's already 6 existing threads, now that you have what looks like a plausible answer to the riddle!

Originally posted by Asktheanimals
I would suppose these trail are only as old as the last rains?
That could take decades......some kinda patient rocks.

Not decades. It rains almost every year in Death Valley, though about 3 years out of the past 100 or so it didn't rain at all:

Driest Place in the United States

Death Valley does lead the country in the number of years lacking rain. A year of complete drought is rare, even in the most arid parts of the United States. Death Valley has had three dry years.

Death Valley gets a little over 2 inches a year.


Many times this area will go without rainfall at all for years. Some places in the Atacama Desert have not had rainfall for over 400 years.

That place is so dry, there might not be enough water around for rocks to slide on ice dams.


Originally posted by againuntodust
Can this be related to egyptian pyramids somehow?

Care to elaborate? Do you mean related to how they were built?

Well I see desert, stones moving with little effort, and I instantly think - oh, so maybe there was some type of natural assistance in the creation of the pyramids, transporting the stones and whatnot. Personally I feel harmonics and resonant frequencies were used to build the pyramids, but moving the stones on a linear path from point A to point B, might require a little natural assistance! This science seems to lend credence to that idea.

posted on May, 11 2011 @ 10:24 PM
link
reply to post by againuntodust
It's totally unrelated unless you can be more specific than that about the relationship.

The pyramid stones were installed at a frantic pace. They didn't have time to wait for the wind to blow, and they probably moved stones against the direction of the wind at least some of the time. Plus there's nothing in this science about resonance and harmonics. It seems to me that you're trying to make a connection where there isn't one, or if there is a connection, you haven't explained it.

posted on May, 11 2011 @ 11:50 PM
link
What would really be mind-blowing would be if you put something in the path of one of these sliding rocks and then later come back to find the rock actually went around it. That would be spooky!