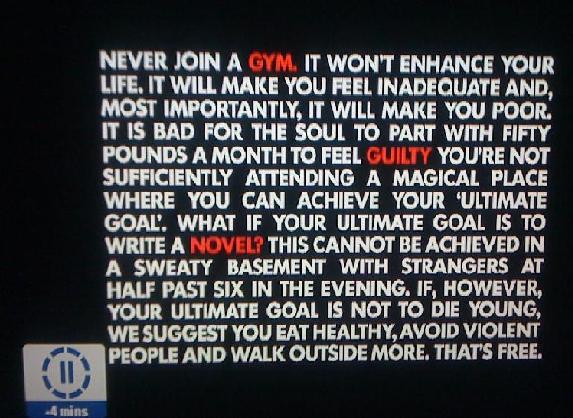 I can only assume it is some kind of bizarre ad campaign, but to be honest without the ability to pause live TV alot of people aren't going to be able to see what this says.

posted on Mar, 9 2011 @ 03:00 AM
link
The message is not that bad so I don't know the purpose of the message. Nice catching this one. It seems like a subliminal message. But by whom?


Um - it is a government ad trying to stop the huge numbers of sick and dying people? (Because they cost too much).

By telling you to get out and walk, eat healthy food, and enjoy your life - get back to nature, maybe.

posted on Mar, 9 2011 @ 03:07 AM
link
Its a message from someone who is reaching out to others. This will hit home for a lot of people. There is an underground going against the status quo. You'll see it more and more. Nice catch.

posted on Mar, 9 2011 @ 03:10 AM
link
Maybe it's a little prank? - A nice message, but inserted on the sly by some bored TV station employees? - Its' been done a few times before, one time hackers hacked a live feed from a weather monitoring CCTV camera, they spliced in a nuke blast on the horizon, panic and LULz all around.

posted on Mar, 9 2011 @ 03:19 AM
link
It has nothing to do with government. Actually quite the opposite. There is a spiritual war going on right now. It has nothing to do with major religions. I would give you specifics, but that would defeat the purpose. Anybody that knows of esoteric studies, they'll know what Ultimate Goal means. Its a good reason to get away from the t.v. that's for sure.

I am so glad you know the answer.

Have you ever heard about discussing something?

More 4 was the channel I think mate. Either that or Channel 4. I was being made to watch Come Dine with Me so my attention to the TV only piqued when this popped up

doctor j and inmate c5779
+4 more
posted on Mar, 9 2011 @ 03:29 AM
link
I don`t know a lot about this sort of thing but I would be more interested in what show was one rather than the commercials. Here`s why... I find it peculiar that there are 3 words in RED. Maybe these are trigger words for MKULTRA/Project Monarch patients, or a particular one. One they knew would watch this show. It was hidden in a nice sounding message because they know with live tv someone will catch it. Also notice the first word, the period is also RED. It is part of the message or code. Same with the last word, the question mark is red. There could be something specific to the programming that the period and question mark activate or start something. It makes the command more specific. That way there won`t be an accidental trigger when someone just happens to see those words in red. But if the period and question mark are in the right place, then the message will be understood by the brain meant to receive it. Again I don`t know anything about it but those are just my first thoughts. It may not be subliminal advertising, but subliminal mind control.


This is very odd. We need to know what channel you were watching. I would suggest emailing the channel with a a copy of the photo attached or even send them a direct link to this thread, and politely ask what the purpose of the subliminal message is.

posted on Mar, 9 2011 @ 03:35 AM
link
i know what it means get of the couch eat healthy so you don't die young but what is with the letters in red gym, guilty and novel ill chuck it thought a word scrambler but i don't think it means anything no.

posted on Mar, 9 2011 @ 03:36 AM
link
That is truly strange. Yes do get in touch with the channel and let us know.
The question has to be - what else is being flashed up?
Apart from anything it is partly BS. I think most of us know you don't have to join a gym but some people do need the peer support and encouragement that a gym can offer.


I would like to discuss the fact that you say who it is from, and who it is not from.

If you know for sure, I would appreciate knowing that.

posted on Mar, 9 2011 @ 03:44 AM
link
You know I just had a thought - could this be preparation for another Derren Brown special? (For non-UK users Brown is a British magician & mentalist who uses subliminal techniques VERY heavily.) He's also on Channel 4. He had a show called How To Control The Nation that featured subliminal messages www.youtube.com...

Maybe he's about to pull the same trick?

Originally posted by ALadInsane
So I was watching TV last night. During the commercial break, and in between an advertisement for some boil in the bag fish type thing, and a car, this pops up:

I can only assume it is some kind of bizarre ad campaign, but to be honest without the ability to pause live TV a lot of people aren't going to be able to see what this says.
looks to me like an anti-corporate message... it kinda has a point too, walking is free and you get to experience the wonderful outdoors. in this world of corporations trying to milk us of every last red cent that we have made, this message is a breath of fresh air! my guess is that it is a hacker trying to get his (or her) thoughts out in the most attention getting way. and the half a sec time frame just screams this person does not wanna get caught by the cyber-police!


I'll be watching myself. I've mailed my girlfriend to find out what the channel definitely was to make absolutely sure before I email any of the companies asking what the heck it was. I'm not too worried about it in terms of subliminal advertising (which has been proven not to work). I just found it...well....odd and not to mention obscure as it doesn't really do

a) the channel a favour because surely if we all went outside and walked more they'd get less viewers? and
b) It didn't seem to be able to link to the two adverts it was wedged between. Boil in the bag fish and a car (again, if we walked everywhere instead, car sales would drop?).

My initial thoughts were it was residue from something else, whether it be a TV show or another advert that just somehow glitched it's way onto TV.