posted on Sep, 16 2006 @ 08:44 PM
link
I was watching Fahrenheit 9/11, and when Bush was doing his "mission accomplished" speech on the USS Abraham Lincoln something stood out.

The crossed anchors in this picture look very similar (although hard to tell in the old black and white pictures) to the "brand".

Sorry about the broken link, it worked when I first tried it out.

The crossed anchors in this picture look very similar (although hard to tell in the old black and white pictures) to the "brand".
crossed anchors

Is it just me but that site is coming up forbidden
Another thought that i've had is wondering if the linking between gannon and this kid was just a cover to get the media off the fact that they had a propagandist working to muddy th waters. I honestly don't know what to make of it and I find it weird that the pictures were confiscated by the police according to the investigator and then just reappear on the doorsteps of people such as this kids mother.

Jimmy (Gibson) stated that he had escaped with Johnny from the pedophile ring and sought refuge with his parents. Jimmy was a runaway that got caught up in the same ring that Johnny was kidnapped into. Jimmy showed the rocking X brand he had received while in the ring to Noreen and the America's Most Wanted producers; many other boys were branded like cattle with this rocking X logo to torture them and mark them for life so they could be identified by this distinctive mark. A brand like this is registered with a ranch in Colorado. This mark can also be seen on Johnny in one of the photos that Noreen received in August 2006.

My interest in this case was recently renewed when a member of another forum I belong to noticed the disaperance of the threads dealing with the Franklin Case. When he started a topic asking about what happened to those threads the site administrator posted the following comment -

"I don't want to go in to too much detail here but we recently received a legal threat from an individual threatening to file a lawsuit against us unless anything pertaining to the Franklin case was removed from the forums as he deemed it damaging to his reputation. As we had no wish to become involved in a legal dispute we had little choice but to comply and remove the threads."

I think its rather strange considering the amount of content on the internet that deals with the Franklin case including serveral websites dedicated solely to it (and not to mention the forum where this happened is hosted in Ireland). I don't know any details of the legal threat other than whats explaned in the above quote, so I don't know if the site administrator was provided with any kind of varification or simply took the email at face value which would open the possibility of it being a a hoax.

Anyway, I not only wanted to contribute to this thread but also give a heads-up in the event that something simular happens here or else where on the net.

posted on Jul, 17 2008 @ 11:55 AM
link
If you have not seen, "Conspiracy of Silence", watch it, as it is a must see, It was one of those things smuggled out more or less, it was supposed to have aired on tv, was even in the tv guide, but someone bought every copy and stopped the airing of the show, someone managed to get a copy out and it is on google video, maybe you tube.

This was made in the 70's or 80's and the video is not the best quality, but some have been cleaned up as much as possible so if you click on a really scratch copy, just look for another one until you find a better one, last time I checked there was about 15 versions listed.

Here is a link describing the film.

Also there is this interview with the mother on the evidence she has uncovered and why her son can't come home.

posted on Jul, 18 2008 @ 04:42 PM
link
I was reading some more on this case and discovered another picture, showing the young Johnny Gosch tied up on a bed, this one showing the name of a camp on the pillow case. If anyone can post the pic, I would appreciate it. Anyone ever been to this camp?

Originally posted by goose
I was reading some more on this case and discovered another picture, showing the young Johnny Gosch tied up on a bed, this one showing the name of a camp on the pillow case. If anyone can post the pic, I would appreciate it. Anyone ever been to this camp?

Here is a Camp Caribou located in Maine.
www.campcaribou.com...

Also, noticed on their website that it is an all boys camp that was open in the 80's. Their cheapest session is $5400 for three weeks. (and here I thought $300 a week was pricey...)

posted on Jul, 19 2008 @ 12:57 PM
link
Thanks, I went to the website to look at the camp, you linked to, and found it odd that they would not let me see anything about the alumni until I registered, if you click on alumni, it takes you to a page requesting you register, but would let me look at everything else about the camp without registering.

It seems that there are a few other 'Camp Caribou'-s out there...


Camp Caribou, situated in the Summerstown Ontario area (at one hour from Montreal and approximately 15 minutes from Cornwall) under the auspices of Conquest, NA Inc., offers a summer camp to young catholic boys for a better spiritual life with the help of The Legionaries of Christ.


I served in the Civilian Conservation Corps as an enrollee in 1933 and 1934. I was at CCC Company 703, Camp Caribou, Camp F-11. Lutsen, Minnesota. There was many different ratings and pay scales. They accepted people in the area, called them local woods men, (curator, probably Local Experienced Men). These were fathers of families. They paid them more than regular pay. We were paid $30.00 a month, $5.00 in camp. The balance was sent to your family.

It also apparently was a Canadian Children's show, but under the name of 'Camp Cariboo'
en.wikipedia.org...


Camp Cariboo was a popular Canadian children's television program which aired on YTV. It lasted five seasons from 1986 - 1989, and was hosted by Tom Knowlton and Mark Baldwin. Each show consisted of a variety of short skits, riddles, songs and stories, all portrayed in the setting of a fictional summer camp attended by young campers.
Camp Cariboo was produced by CKCO-TV out of Kitchener, Ontario, and filmed in part on location in Ontario Camping Association camps.

There is not much information as to where this 'Camp Caribou' is...
www.youtube.com...


I don't know if I helped with all this information or not.

What is interesting about the 'Camp Caribou' T-Shirt is that where ever that boy was, a child in that house seems to have attended 'Camp Caribou'. Which one exactly, maybe the expensive one in Maine. Maybe one of the other Camps. It is doubtful that the child went to the Civilian Corps one in Minnesota, but possibly the one in Mass. on Canada.

If anyone can post the pic, I would appreciate it.


Not easy to look at.


EDIT: The gag looks wrong and the face appears to have some "Photoshop" done if you look at the bridge of the nose, upper lip and how the gag covers the lower jaw.


The child depicted above is not the same as this next one, a picture taken shortly before Johnny was abducted.

Notice the pug nose and then look back to the last picture.


Also compare these.
Here's the first pictures that his mother received.

The mother says Johnny is on the far right in this picture. 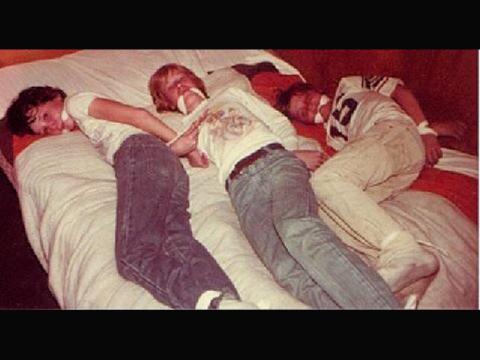 Is it "Photoshop" on this one or is the brand added in this next picture ??? 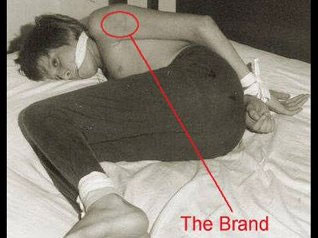 I do find this next one interesting, a picture claimed to be then President G.H.W. Bush with Johnny standing behind him. It's said that this was taken two years after his abduction.

Make a critical comparison and tell me if these all depict the same person, because I don't think so.....

posted on Jul, 19 2008 @ 08:25 PM
link
You are right these photos are not easy to look at, I keep reminding myself the mother has said he came to see her as an adult a few years back, but could not stay due to he is in danger from the people who kidnapped him, he knows too much.

Here is a link of the interview with the mother of Johnny Gosch.

I know some people don't like rense, but here is an outline of the story about Johnny Gosch case and also an indepth interview with the mother where she talks about the threats and the information she has uncovered, also talks about the possibility that Gannon might be her son.

posted on Apr, 28 2012 @ 03:40 AM
link
This case freaks me the hell out! It's also a huge part of why I got into this site and researching things like this to begin with. It's so messed up.. I wish we could get an outline of all the facts we know from this case in a newer, restructured form because you see so many hypocritical and contradictory statements everywhere you look..