The 757 Hitting the Pentagon

posted on Sep, 25 2005 @ 07:55 AM
link
I have a question about this having read the debunking attempt that anything other than a 757 couldnt have hit the pentgon. 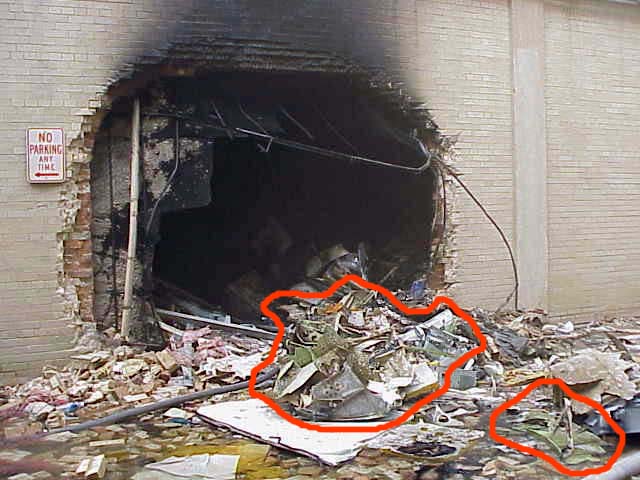 This looks very odd to me, if this is the fusealge, first of all the plane would have had to have touched the ground. The base of the circle is cut off. I think i would expect to see a different shape, as the bottom half of the aircraft fuselage is heavier than the top, which is mostly air and aluminium.
So
1. There should be clear markings on the ground of an aircraft impact
2. I think the hole should be the other way around, curing inwards not outwards at the bottom like this would make. 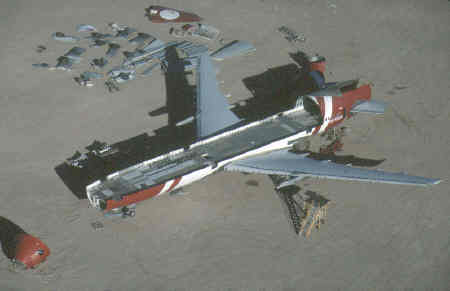 now with the help of some pentalawn photos things seem a bit odd to me.
At the very least it is a stange crash.


i Would have expected something from the below. just some skidding and scraping, not alot just some.

I am not totaly convinced by the debris either, however ill just assume that like the twin towers impact, the whole thing dissapeared into the buidling.
Photos like this just make me more suspitious, what is it part of and what is it doing way out here? If the aircarft was traveeling at 350mph and the rst of it has dissapeared inside, how did this bit get over here?

Another interesting statement that raises further doubts is that of the Country Fire Chief.

journalist: "Is there anything left of the aircraft at all?"

"First of all, the question about the aircraft, there are some small pieces of aircraft visible from the interior during this fire-fighting operation I'm talking about, but not large sections. In other words, there's no fuselage sections and that sort of thing." "You know, I'd rather not comment on that. We have a lot of eyewitnesses that can give you better information about what actually happened with the aircraft as it approached. So we don't know. I don't know."

Even people who are convinced that a 757 did the damagge have to admit there is not alot of debris visable on the outside, so it is very difficult to be convincing without having been there, and yet there is the county fire chief saying he doesnt know where it all it.
It does raise questions.

Anyway my main question is did the aircraft touch the ground or not, i would have to say no it didnt, but if it didnt how does it make a hole like this

posted on Sep, 25 2005 @ 08:03 AM
link
I agree, the "debunking" left a lot of unanswered questions. It certainly didn't close the case for me. The size of the hole and the lack of debris just doesn't make sense, especially with the lack of fire damage to the building's interior. There are many of us who are not convinced.

posted on Sep, 25 2005 @ 08:51 AM
link
I think you're confusing the hole at the impact zone with the hole a few rings inside the Pentagon. The hole you show here is the one on the interior, not the impact hole. So, the "touching the ground" argument is irrelevant in this case.

posted on Sep, 25 2005 @ 08:56 AM
link
The standard conspiracy site shows the hole in the inner ring leading to the courtyard caused by an engine penetrating the wall, which was NOT reinforced since it was an inner ring, and claims that's the hole caused by the fuselage entering the building.

Why would there be a lot of debris outside the building? 90+% of the airplane went INTO the building, and the parts that didn't (the wings) would have shattered on impact.

Lack of fire damage? Where exactly was there a lack of fire damage? You mean on the inside where they pulled people so horribly burned that they spend a year in the hospital? Where they found ONE survivor on the ground floor that somehow managed to get behind cover and have the fireball go over his head?

But is that the only hole that was in the facade before the collapses started?

In this picture, to the right of the entry hole behind where the third fireman is walking, is this some kind of fence?

posted on Sep, 26 2005 @ 06:18 AM
link
Yes. It looks like it was a chainlink fence. From the looks of it just some of the poles are still standing. Just to the right of the collapse you can see where some of the chainlink is still attached, but it's curled around the poles, and there is nothing standing in front of the collapse. It's probably leftover from the construction. They hadn't officially finished yet, so they probably hadn't finished taking it down.

Originally posted by wecomeinpeace
I think you're confusing the hole at the impact zone with the hole a few rings inside the Pentagon. The hole you show here is the one on the interior, not the impact hole. So, the "touching the ground" argument is irrelevant in this case.

yes i noticed this after i had posted. But one of the problems is actually finding the hole in the front of the building. I think bsbrays photo is one of the best ones i have seen.

posted on Sep, 28 2005 @ 05:21 PM
link
That's because until after the collapse they were more concerned with pulling people out and putting the fires out. With all the firefighting efforts, and everything else going on, it couldn't have been easy to get good pics of the building pre-collapse, and afterwards, there was so much damage, that there's no way to tell how big the hole was.

1. How does an inexperienced pilot fly a plane inches from the ground without crashing?

2. Why does the one surveilance video show no plane? I have seen people try to draw a plane in the pixels...the building is clear...why not a plane?

3. The turbulance from a 757 flying a few feet over the freeway during rush hour would have caused vehicles to flip over. There were no stories of even a deafening sonic boom.

Difficult one this. There was wreckage, but not alot of it is visable.
If you looked where the plane hit the twin towers, you woudnt see much wrekage because most of it went flying through the bulding and out the other side.

And though I have never smelled nor intend to smell your rear end, I agree with point #6 as well.

Originally posted by GTWill
3. The turbulance from a 757 flying a few feet over the freeway during rush hour would have caused vehicles to flip over. There were no stories of even a deafening sonic boom.

Ohh a new sig line. (you do realize just how stupid that statement is, don't you?)

1) There wouldn't be a sonic boom due to the fact that the plane wasn't travelling at that speed.

2) Planes run fairly close over highways all the time (at least in my area). See the Long Island Expressway (JFK Airport) or NJ Turnpike (Newark Airport) as examples.

Sometimes they look so close you think you can grab a wheel.

posted on Sep, 30 2005 @ 01:38 AM
link
Going by your logic, none of these approaches should be where they are, because cars and people would be thrown everywhich way. But yet, here they are....

Of COURSE there was no debris on the outside. The plane was IN the building when most of it exploded. The frame of the building contained most of the debris, and we don't see detailed pictures of the entire lawn around the building.

The hole is too small? Which one, the one on the inner courtyard caused by the engine punching through the non-reinforced wall, that everyone claims was caused by the plane, or the one where the entire section of wall collapsed? Because if it's the one where the entire section of wall came down I'm really impressed that you think that's too small. That should mean that the entire side of the building should have been destroyed. DESPITE it having just been rebuilt with reinforced concrete and kevlar.


There are no pictures of plane, because the ONE camera that caught it was designed to take STILL PHOTOS of cars entering the parking lot. The plane was flying at 500 mph. You camera takes a photo once every two seconds say, for the sake of argument. How far do you think the plane has moved in that time?

posted on Sep, 30 2005 @ 01:41 AM
link
I'm with the theorists contending that it was not the plane they claim it was. They're not conspiracy theorists because of course we have an acknowledged conspiracy at the outset.

What about the fact that according to the flight schools these clowns couldn't fly a paper airlplane let alone a commercial jet? And the notion that the wings would fold up conveniently and slide into the bldg. I find supernatural.

But the Pennsylvania flight is more interesting in that it allegedly exploded on impact with terra firma yet plane parts were found many miles distant and witnesses heard missiles and saw a govt. plane. I think with all the evidence already pointing at cover up and complicity it's harder to accept anything Washington spouts about what really happend on 911. Especially until the gag is lifted from former FBI translator Sibel Edmonds who has a big story to tell about who had foreknowlege and was involved in 911 based upon the transcripts she lost her job for reporting on.

posted on Sep, 30 2005 @ 01:52 AM
link
Have you ever flown an airplane? *snort* Do you know how EASY it is to fly? The plane does EVERYTHING for you. All they had to do was know how to navigate, which ain't that hard, and turn on the autopilot, which would have already been on, because all commercial airline flights are done on autopilot. You want to make a turn, you turn a knob. You want to change course, you turn a knob. You want to change altitude, you, everybody now, TURN A KNOB. The ONLY issue that they would have had a problem with was LANDING. Obviously if you don't want to land an airplane that doesn't matter.

I suggest you go out and get MS FlightSim, and try flying a plane on autopilot sometime. That's the most accurate sim around, and is EXACTLY how a real plane flies.

"The only problem they would have would be with LANDING" and YES anyone that can get a pilots license can become a pilot for an airline, and that's just about anyone.

posted on Sep, 30 2005 @ 04:42 AM
link
Just like to point out that the planes landing in Zaphod's pictures are not flying at full throttle, unlike whatever hit the Pentagon.