Uganda has lost its only international airport, the Entebbe International Airport, to China for failing to repay a loan, African media reported.

The government has failed to reverse a loan agreement with China which had repayment conditions for attaching its only airport.

In 2015, China’s Export-Import (EXIM) Bank lent Uganda $207 million at two per cent upon disbursement. The loan, meant for the expansion of Entebbe airport, came with a maturity period of 20 years including a seven-year grace period, News X reported.

However, as per international media reports, the Ugandan government waived off the clause for international immunity for securing the loan, following which the Chinese lender can retake possession of Entebbe International A

I can't see Beijing doing charity work. they want something in return.

I wonder how far they are willing to go to take back the airport if the ugandans tell them pound sand?

China has denied reports it could take control of Uganda's international airport should the government in Kampala default on a $200 million loan from Beijing.

"The malicious allegation... has no factual basis and is ill intended to distort the good relations that China enjoys with developing countries including Uganda," a spokesman for the Chinese embassy in Kampala said late Sunday.

The denial followed reports in the Daily Monitor newspaper last week that Uganda could surrender Entebbe International Airport should it default on a 2015 loan from Beijing to expand and upgrade the facility.

One would think something of that magnitude would be front & center on everything mainstream and otherwise for the potential milking of the ol' enemies-creeping-closer political chest-thumping spiel.
edit on 11/29/2021 by Nyiah because: Apparently the word of the day is Otherwise. Imma leave it, it'll irk someone. Done my dastardly work well today in that case.

One would think something of that magnitude would be front & center on everything mainstream and otherwise for the potential milking of the ol' enemies-creeping-closer political chest-thumping spiel.

of course at that level they might well lie about the lying.
who really knows what's going on behind all those closed government doors?

I would ask the mods to put in Hoax bin, but not sure if this is false, or the denials are false
edit on 01032020 by ElGoobero because: add content

Could China use it as a military base?

did the bank just press a few digits and tada... its there in Uganda?? 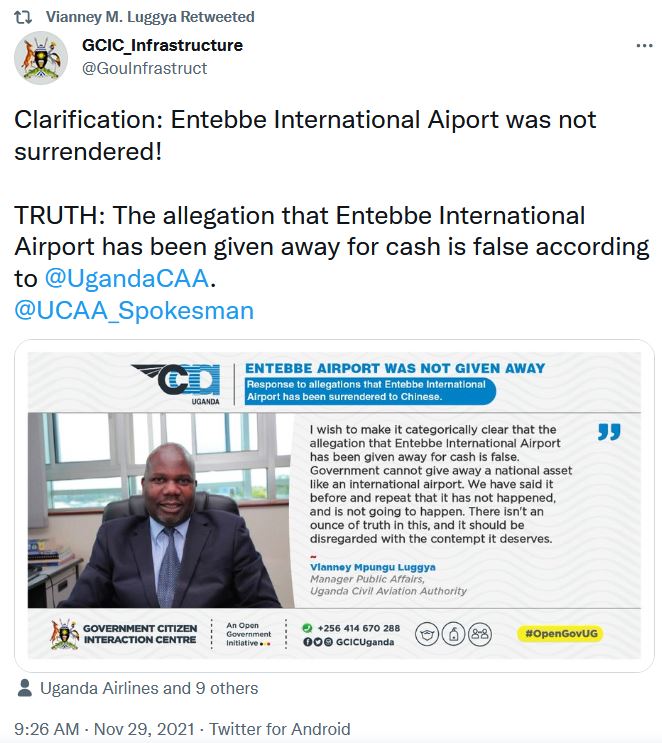 And the Queen remains untouched, so far....

How are the dumbasses going to repossess an airport?

What are they gonna do stick a flag in it?

I wonder how far they are willing to go to take back the airport if the ugandans tell them pound sand?

yep need to send in the Israeli's again.
at em blokes

originally posted by: crappiekat
If this is true...

Could China use it as a military base?


I can't help but think that's the long plan
a few hangers to hide assets in...a warehouse for the missiles...a little extra security...who will ever know?

originally posted by: SuperDave90
Will they try that with the US, when we cant pay?

Naw,all we will do is charge the debt toward all the intellectual property they stole over the years.

If china tries, Uganda need to call Israel, they don't play and cleared Entebbe once.

Sound's like the WAR OF THE CANNIBALS, IDE AMIN and his cannibal clan (Fine he ran off to Switzerland having robbed his nation after DINING on his political opponents and air hostess from around the world arrested on trumped up charges whom then disappeared whom were unlucky enough to fall into his clutches whom suffered before being killed and eaten by him and his men) + (At the time the Ugandan Presidents - Ide Amin's - Abode was like a big bungalow and eye witness said after raping the poor girls they would gut them and hang like like a side of beef before eating them after there chef prepared them - and how bad does that make those Swiss for sheltering that scum).

The Cultural Revolution Flesh Feast Cannibal Communist cult from China (whose party members had feasts during the famine riddled period of the cultural revolution and would eat people in feasts celebrating there own power).

Think I'll go and watch football instead, it's likely to make me baulk.

Uganda - Ushmanda nice people I really have a lot of time for them (not).

i heard this on the radio today and the dude whos up on china said this is what theyre doing: basically its a new kind of imperialism. they finance countries who they know cant afford to pay them back then seize assets. slowly taking over but not displacing gvt etc. very smart.

watch out china taking over the world, resources etc

posted on Dec, 1 2021 @ 05:12 PM
link
I can see a future famine / food shortage, and China loading up food in these poor countries and trying to ship it back to Beijing and the locals going berserk.

Moscow did that to the Ukraine. guess its a communist thing.