KENOSHA, Wis. — The judge in the Kyle Rittenhouse trial banned MSNBC from the Kenosha County Courthouse on Thursday after police reported that a man purporting to be working for the cable news network — or a corporate sibling — was pulled over for a traffic violation Wednesday and suspected of following the jury transport van.

Judge Bruce Schroeder said the man identified himself to police as “James J. Morrison” and claimed to be a producer for MSNBC acting on instructions from a New York-based producer to follow the bus. Jurors are ferried to and from the courthouse each day in a bus Schroder described as “sealed” to prevent them from seeing signs, protesters or anything from either side of the contentious trial that might influence them as they deliberate the fate of 18-year-old Rittenhouse.

A spokesperson for NBC News, the sister network of MSNBC, identified the individual as a freelancer in a statement to The Washington Post but denied an intent to make contact with jurors.

“Last night, a freelancer received a traffic citation. While the traffic violation took place near the jury van, the freelancer never contacted or intended to contact the jurors during deliberations, and never photographed or intended to photograph them,” the network spokesperson said. “We regret the incident and will fully cooperate with the authorities on any investigation.”

originally posted by: TheGreatWork
That's all I got, from a livestream. No links right now. The person doing the following/intimidating works for MSNBC.


I think it is nuts that these jurors aren't getting more protection.

This case is too high profile. They should be in isolation somewhere with total identity protection.

And the judge banned MSNBC from the court as well 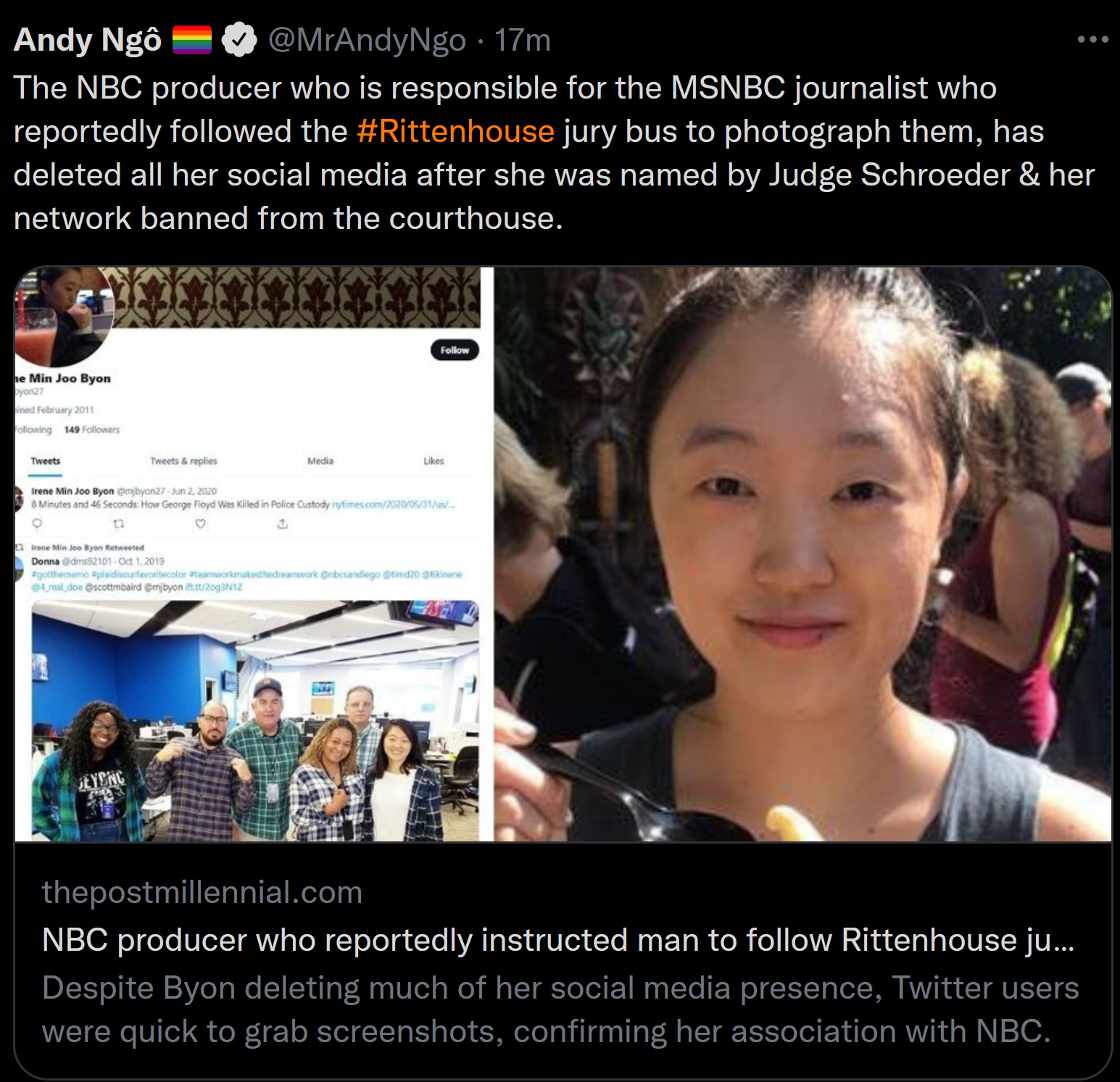 Of course the network describes the person as 'a freelancer'.
But the man himself told the police he was a 'producer' for MSNBC.

A bit of difference there.

And the judge banned MSNBC from the court as well

Thank you. I have updated the link.

Sure, how dare anyone even think about resisting their globalist
pom pom squads, the riots on cue, fires and pallets of bricks.

They must hold the line. The enemedia want the Natural Condition of Man,
that of life, liberty, the pursuit of happiness and the means to defend this condition
eliminated. Life shall be doled out through transhumanist eugenics.
Endless injections (you trust us). As a bonus, just as soon as you do not...you can just starve.
Speak out of line, and the local police will have your ass forcibly 'evaluated', thus proving
these guys are your friends, who want to help you, and not something acted out of
any paranoid globalist metafilth cooked up in a Dustin Muskovitz acid enhanced zoom session.
Hey brother, you need help, and we're here to assist...sorry about the hit to your sosh...

If this means conspiring to fix elections, and Justice,
through terror-extortion everywhere, so be it.
Rittenhouse is a golden opportunity which must not be squandered.
Look what they attempted on us, to a person, through Sandman.
We know exactly which way they want this to land, and it isn't sunny side up.

Regardless of outcome, they will soon be running for their very lives.
We don't need them to screw Rittenhouse
(that's you and me by extension, as their efforts to abolish the Natural Condition of Man, expand)
to interpret their signaling. Their clown world, in your face, what can any one of you do about anything we say...

They are already cooked. But it will come sooner, if they do. Too many of us are aware. Watching.
It must be horrible to have all that power. On the one hand, they feel as though they are holding back!
On the other, they know they are drunk and have done horrible things which they cannot be reminded of
lest they blush, or faint. It's as though they have killed God in themselves...and to seek God would be
to seek justice for someone they had participated in the murder of. There's no room for that!

At least the enemy is being steadfast in their tyrannical position.
As such, it won't be as difficult for everyday folk to take action to erase them.

Guns and open flame are only a problem when they're not the ones wielding them.
How can the enemy be effective when the entire populace is
chasing them with a thirst for their well earned demise?

They are never going to learn.
Your testimony, and the dead link, proves as much. 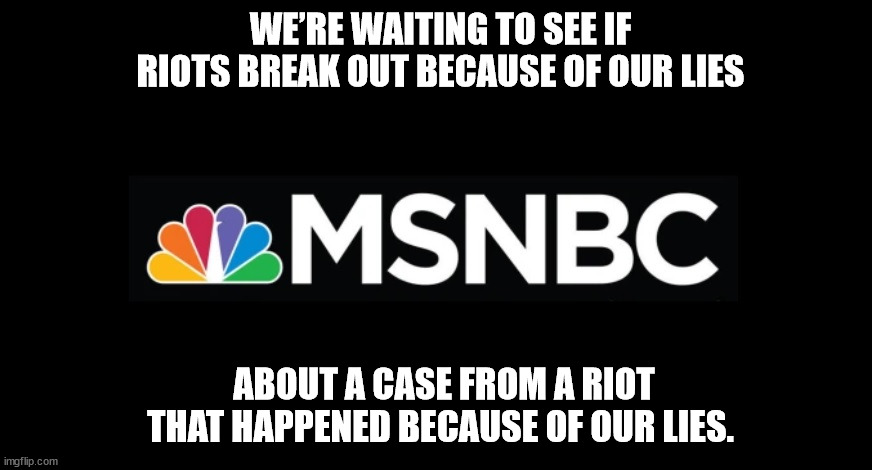 I don't know why these jurors aren't given more protection and anonymity. They are going to be too scared to deliver what we all know is the proper verdict.

The invisible hunter of humanity
becomes suddenly visible,
and fears becoming the hunted?

Some famous crooked clout wielding traitor to Justice, fat with blood money,
is voluntarily
unable to daily fulfill more power and more fame? A cancel warrior is self canceling?
Voluntarily.
No one cared when Jack did the canceling. I don't understand the problem here.

There ought to be a law....this is a Party Member!

2
In Charlottesville trial, jurors learn to decode the secret slang of white supremacists

3
Trump’s rage at Georgia Republicans should unsettle us all

4
It’s not ‘polarization.’ We suffer from Republican radicalization.

ONLY MY SIDE IS RIGHT AND SHOULD REMAIN!

5
The vaccine tore her family apart. Could a death bring them back together? 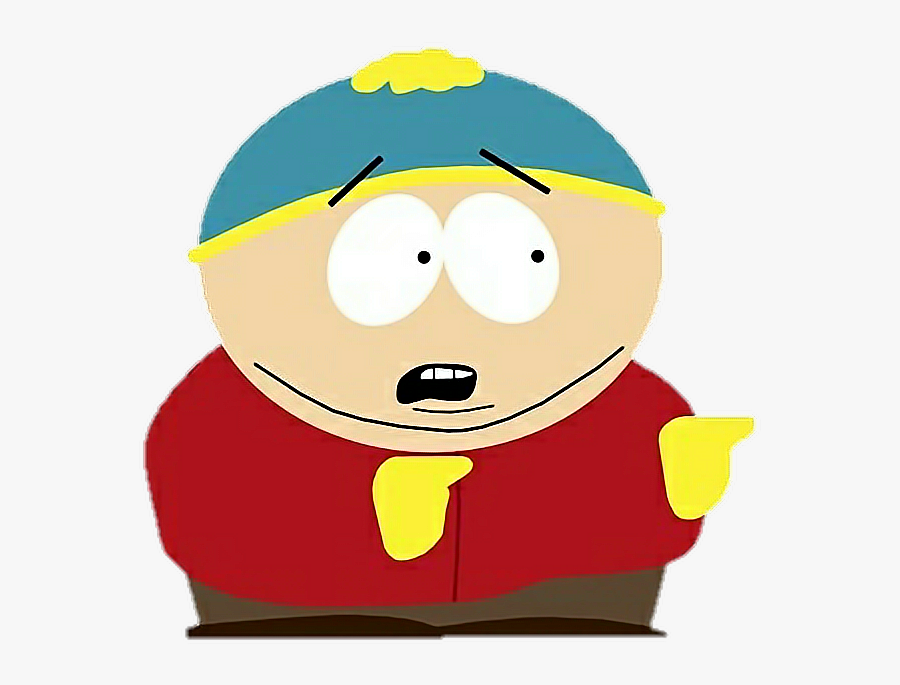 posted on Nov, 18 2021 @ 04:21 PM
link
Your last one listed, Dirty unvaxed died, LOL
I read the story and he died sitting on the crapper.
It was Covid they said.
No autopsy, there is only covid.

(post by Sublimecraft removed for political trolling and baiting)
chris_stibrany


There are people on Twitter calling for Rittenhouse’s and the judge’s deaths before the #ing verdict has even been given, you don’t think the same would happen to the jurors if their identities were known?

You would probably like nothing better than them being doxxed so they could be subjected to the same treatment.

Any reasonable juror that saw the evidence presented in this trial would know that it’s a clear cut case of self defense, but are probably worried about their own safety and their family’s safety from the insane social justice warriors and criminal domestic terror groups, about bringing a not guilty verdict.

We know who’s side you are on.


originally posted by: TheGreatWork
That's all I got, from a livestream. No links right now. The person doing the following/intimidating works for MSNBC.


I think it is nuts that these jurors aren't getting more protection.

This case is too high profile. They should be in isolation somewhere with total identity protection.

Whoever is in charge of this trial, wanted to make sure the jury had access to social media and broadcast media when they were not deliberating.

Just think about that for a minute.

The idiot they helped to cheat into the White House will still be there, damaging our country, regardless of how this trial turns out.

The liberal media needs to focus on things that can help the Democrat bloodbath not be so bad next November.