posted on Oct, 27 2021 @ 02:03 PM
link
That's right. Hydrogen. back in the day as a young engineer / Supervisor hydrogen was cheap to manufacture. Sure it takes some CO2 to produce it unless your in the desert like Saudi Arabia but the CO2 outgass is ZERO.

So wheres AOC. Well shes out spewing doom and gloom with Greta. She should have been there but hay, WTF as is too many crazies out there. Especially educators, school boards and any one in a political job. Correct folks as in big business will clean up the earth. Yes, the earth will be cleaned up.

BATON ROUGE, La., Oct. 14, 2021 /PRNewswire/ -- Today, Louisiana Governor John Bel Edwards and Air Products Chairman, President, and Chief Executive Officer Seifi Ghasemi are announcing a $4.5 billion clean energy complex to be built in Louisiana that will make the state a leader in the United States (U.S.) clean energy transition. Air Products is a world-leading industrial gas company that produces and transports hydrogen and other essential industrial gases to many customer facilities in Louisiana, across the U.S. Gulf Coast and around the world. Air Products (NYSE: APD) will build, own and operate the megaproject, which will produce over 750 million standard cubic feet per day (MMSCFD) of blue hydrogen in Ascension Parish, Louisiana. "Blue" products are produced utilizing hydrocarbons as a feedstock, with the carbon dioxide (CO2) in the production process captured for permanent sequestration. The project will create 170 permanent jobs with a total annual payroll of $15.9 million and more than 2,000 construction jobs over three years. It represents Air Products' largest-ever investment in the U

In the meantime I am still in stock ownership of USA Oil Refiners and Lithium. As such my disclosure are ownership positions in OXY, MRO and LAC. I own no APD at the time of this thread.

I have been assured by many that hydrogen costs more to make than it's worth, so it will NEVER be a viable option. it's sad since it's a zero emission fuel source, but you can't be wrong if you are a physics guy.

The energy equivalency of Hydrogen to crude oil is such that for every unit measure of crude oil, you would need 47.3 units of hydrogen.

This is a really good thing!

I'm not sure of the cost of the final product in relation to oil, but this could break the US's dependence on fossil fuels

If the math is correct, that’s a good breakdown!

My question is where are they getting that much hydrogen from? Is it taken from water? How much resources will be converted to accomplish this, the environment does need water in it. Taking oxygen out of air to return it to water while burning....what does that do to the environment? Does anyone actually investigate these kinds of things to broadly assess the impact of change on the environment? I do not know, I am just wondering what will happen if this goes wide scale, one factory....no problem...but if they put up lots of these factories and swing the pendulum, what would it do?

originally posted by: bluemooone2
The beauty of hydrogen is that it converts back to water when burned. ( I think so anyway) a reply to: rickymouse


That would be a correct statement .


The Myth of the Hydrogen Economy
Get it ?
Got it ?
Good !

originally posted by: network dude
a reply to: Waterglass

I have been assured by many that hydrogen costs more to make than it's worth, so it will NEVER be a viable option. it's sad since it's a zero emission fuel source, but you can't be wrong if you are a physics guy.

I can assure you that things like Solar panels make up for any of that Bull snip about it not being a good idea. The fact of the matter is, some entity has been holding back the use of H2.

And I keep bringing up a Hydrogen car my Alma mater built many years ago that wins 1st place in the alternative fuel concept cars.


The Myth of the Hydrogen Economy
Get it ?
Got it ?
Good !

Not a bad introduction to the topic, but air products is talking about ammonia and I didn't see anything in your source about ammonia. There are even research projects producing experimental cars with internal combusion engines that can run on ammonia, a possibly viable alternative to transporting hydrogen not really addressed in your article.

Of course we don't have production volumes of ammonia-ready internal combusion engines today, but these need to advance in parallel, since it's sort of a chicken or egg scenario, which comes first? It doesn't make sense to produce engines that can run on ammonia without viable sources of ammonia and it doesn't make sense to produce ammonia as a fuel for internal combustion engines of no IC engines can run on it. So both need advancement.

However it's still uncertain how the economics will all work out, but it may not be quite as doom and gloom with ammonia as the alternatives mentioned in your linked article.

originally posted by: Gothmog
a reply to: Arbitrageur
When did folks change the name from hydrogen to ammonia ?


What is the chemical formula for ammonia and how much hydrogen is in it?
Your article talks about transportation difficulties with various forms of hydrogen, but it doesn't talk about using ammonia as a transportation method for transporting hydrogen.

This is from the link in the opening post:

The balance of the blue hydrogen from the new Ascension Parish facility will be used to make blue ammonia that will be transported around the world and converted back to blue hydrogen for transportation and other markets.

If they can make internal combustion engines that run on ammonia, it wouldn't even be necessary to convert the ammonia back into hydrogen, but that can be done.

Ammonia as a Hydrogen Carrier 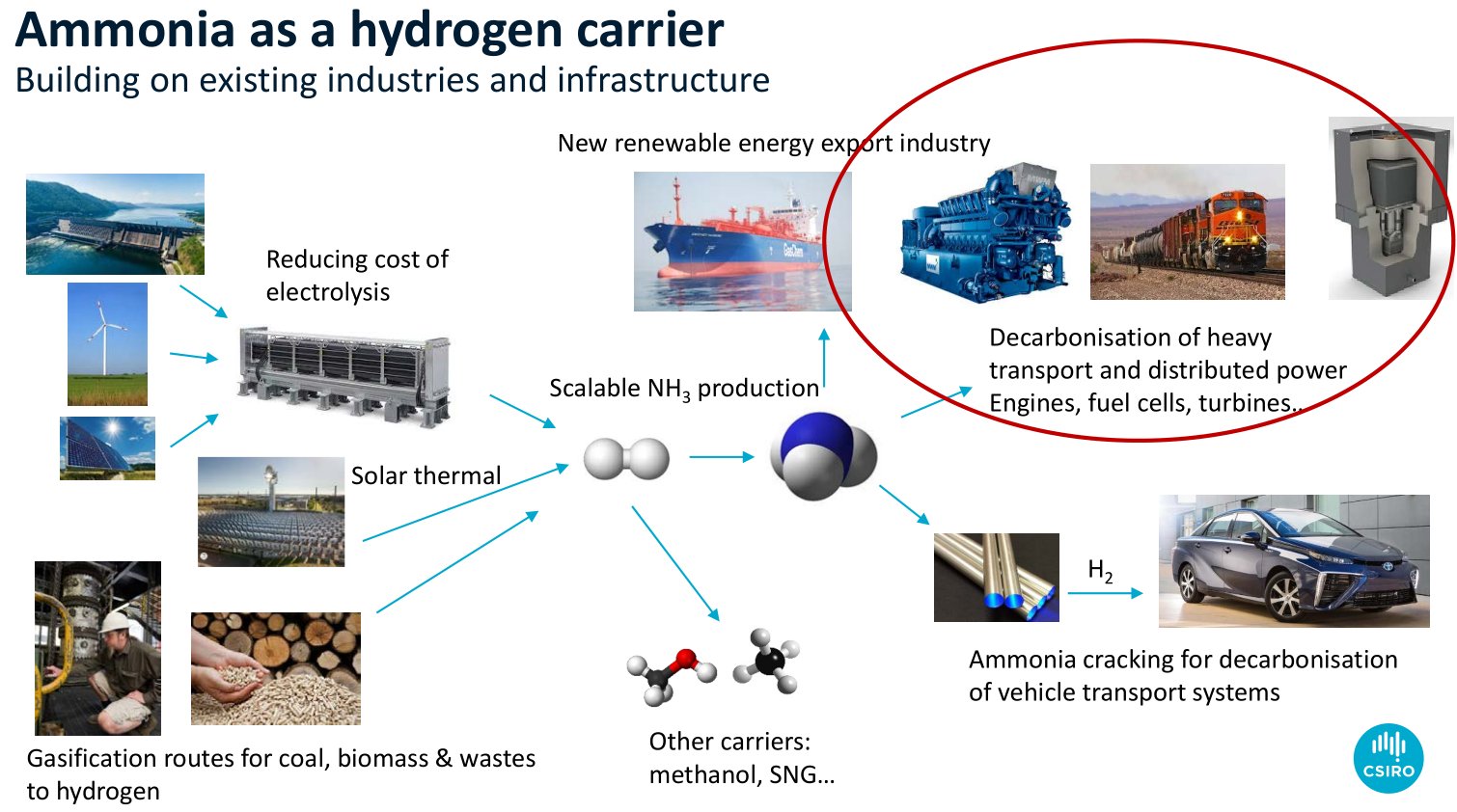 originally posted by: Gothmog
a reply to: Arbitrageur
Hell , ammonia is a deadly chemical .
Even I knew that .

Ammonia doesn't kill nearly as many people every year as dihydrogen monoxide, which kills even more people than carbon monoxide. Besides, as your article says hydrogen isn't exactly completely safe, it's more explosive than gasoline, and gasoline isn't exactly safe either, but the risks are manageable.

edit on 20211027 by Arbitrageur because: clarification

The production of US crude oil peaked in the 1970's as predicted by the geologist Hubbert, who also predicted that world oil stocks would also reach their peak, and production would then decline, in the 21st century.

So far, his predictions have proven fairly accurate, and although the US is still producing oil, there are signs that oil reserves are definitely finite and will run out.

but isn't the whole process of creating Ammonia not very green and uses a lot of energy?

One of the main industrial byproducts of ammonia production is CO2. In 2018, high oil prices resulted in an extended summer shutdown of European ammonia factories causing a commercial CO2 shortage, thus limiting production of carbonated drinks such as beer and fizzy soft drinks.[15] This situation repeated in September 2021 due to a 250-400% increase in the wholesale price of natural gas over the course of the year.[16][17]

Would seem a strange loop just use the gas to make electricity.

Interesting take on how much oil we have left to use.Is the World Running Out of Oil? Probably not, but demand may fall in the future.

Most of the planet's oil and natural gas deposits were created when decomposing biological matter is 'cooked' in high temperatures underground. But non-biological hydrocarbons have also been found deep inside the Earth, where chemical processes create the molecules from inorganic sources such as rock.

Deep-ocean vents are a source of oil and gas

Perhaps once it becomes financially profitable the money men will get their profits from carbon credits by switching to another natural source of energy.

posted on Oct, 28 2021 @ 12:05 AM
link
a reply to: puzzled2
The past is the past and the future is the future.
Yes, typically making ammonia or hyfrogen from natural gas wasn't carbon-friendly because natural gas contains carbon and the carbon was released in the process.

What air products is calling "blue" hydrogen and "blue" ammonia means the CO2 wont be released like it used to be, rather it will be sequestered, that's not something that was typically done in the past. From the OP link:

The innovative megaproject will also feature the world's largest instance of CO2 capture for permanent sequestration and produce only environmentally friendly blue products.

I wish the article gave more details about the CO2 capture method planned, I'd be interested to learn more about that when I have time to look into it.

Regarding how much fossil fuels are left, it may be a moot point if we choose to not use them all and leave some in the ground, unused, to avoid releasing the CO2.

How long before we run out of fossil fuels?
In addition to the uncertainties of the amounts of fossil fuels, that article also raises the question of whether we should even use the known reserves, or leave them in the ground. If we use them without a way to re-sequester the carbon, history may repeat itself, to the state when Greenland was a tropical paradise instead of being covered by a giant ice sheet.


...whilst many worry about the possibility of fossil fuels running out, it is instead expected that we will have to leave between 65 to 80 percent of current known reserves untouched if we are to stand a chance of keeping average global temperature rise below our two-degrees global target.


So from that perspective, if we want to limit the temperature increase of the planet, the exact amount of fossil fuel reserves still left in the ground may not be the limiting factor anyway, since we may end up leaving some of them in the ground.


I was just about to post this and then i read you post,ty.

posted on Oct, 28 2021 @ 05:35 AM
link
a reply to: Waterglass www.sciencedirect.com... This is the way to safely store hydrogen. Bob lazar has a corvette that has tanks in the trunk that store hydrogen with hydrogen hydrate. It applies a very low current that releases the hydrogen as needed. However hydrogen hydrate is used in H bombs and is hard to obtain.