The funniest tanks in the world

posted on Oct, 22 2021 @ 03:42 AM
link
Hello ATS!
Today is Friday and I want to introduce another Friday thread. I will show you the funniest tanks in the world. So let's go: 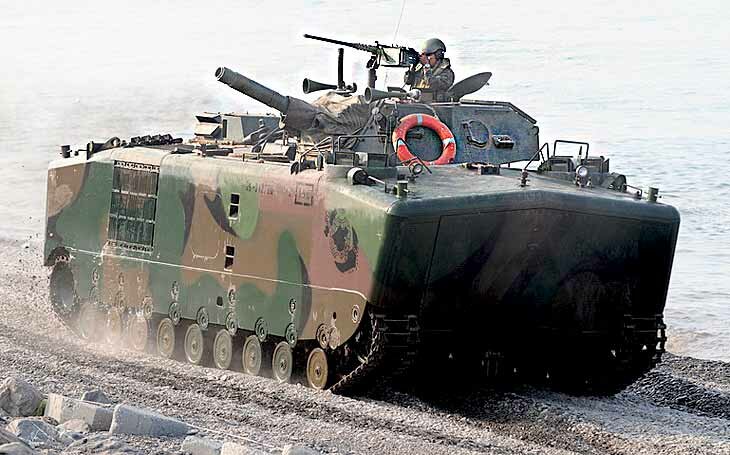 "Child of India" was distinguished by a very large crew, which consisted of 7 people: the commander, gunner and loader - in the tower; Driver mechanic and crew commander - in the control department; 2 supplying shells were located in the fighting compartment behind the tower. The Indian LVTH6 tank was originally planned as a landing vehicle, but armed with a 105 mm howitzer. Its main purpose was to be the fire support of the landing force landing from weakly armed transporters. But, in the end, the behemoth tank turned into a means of moving the M49 howitzer and ammunition to it. 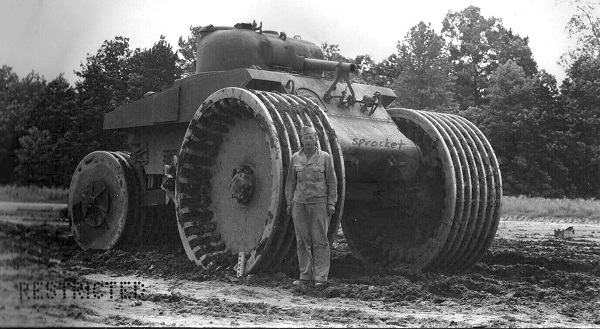 In the military environment, the T10 tank is called the "roller of war". And this expression is not figurative. To be convinced of this, it is enough to look at it. For some, he is the epitome of the freeway tank, others consider him a demining genius. But for specialists, the T10 is a symbol of a difficult, inexorable, but fast tank breakthrough. 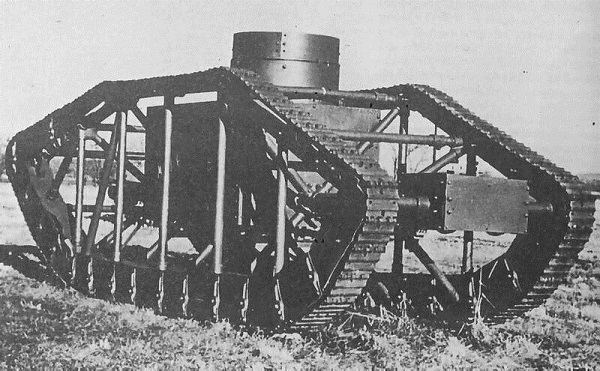 Tank from the First World War. It was assumed that the "holes" will reduce weight, and the shells will fly through the tank without damaging it, which will increase survivability.
The hull of the tank was mounted on steel pipes between the frames and received a box-like shape to simplify the design. The body was assembled on bolts, rivets and corners, which attached 12-mm armor plates. The fighting compartment and the control compartment were located in the front - there were places for the driver, tank commander and machine gunner. A cylindrical turret with one 7.62 mm machine gun was installed on the roof of the fighting compartment. At the rear of the hull were two 50 hp Beaver 4-cylinder petrol engines. each.
Due to its original design, this combat vehicle was named "Skeleton Tank". 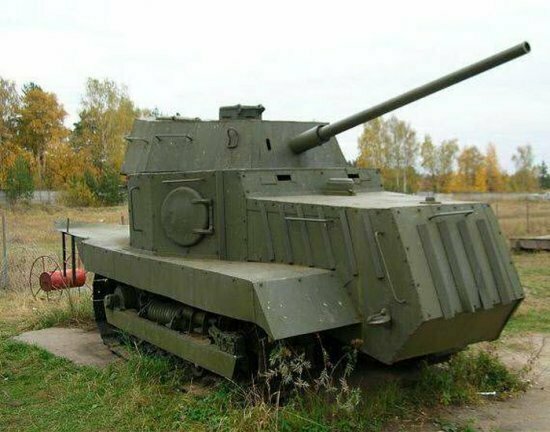 This is an imitation of a tank based on a tractor.
The tank was an ordinary STZ-NATI agricultural tracked tractor, sheathed with armor sheets. In this instance, the "cannon" is a pure props - just a pipe or even a log sticking out of the tower. The tractors were protected by welded armor, but more often just steel sheets taken from the Odessa shipyard. The sheets were placed for a reason, concrete was poured between them, which increased survivability and made it possible to protect the crew from conventional small arms - a simple steel sheet (even folded 4 times), rifle bullets pierced. The vehicles were armed with light machine guns and the crew's rifles, which were pushed into the loopholes. Sometimes towers from destroyed tanks were also placed, in this case the guns were not fake. 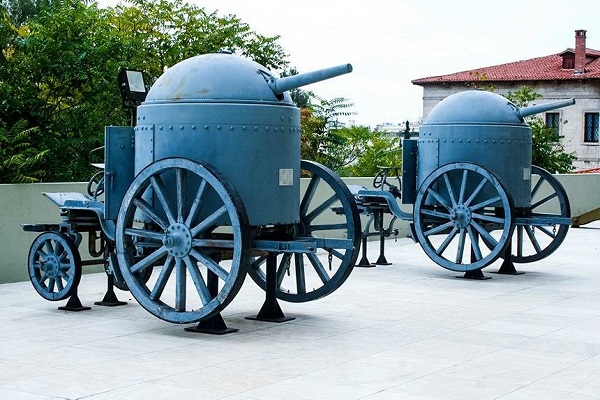 Another interesting combat vehicle of the early twentieth century was Schumann's armored carriage. Formally, this is not really a tank, but a mobile artillery installation. Or, to be more precise, the Fahrbare Panzerlafette - that is, a self-propelled armored carriage. However, this device can be considered the most real forerunner of tanks. And that's why.

Firstly, this invention of the German engineer Maximilian Schumann made it possible to shoot with direct fire, despite the return fire of the enemy. All - thanks to the use of armor, so relevant in the conditions of trench warfare. Secondly, Schumann's armored carriage had a rotating turret, which was borrowed from warships. Finally, in the third, the armored carriage was distinguished by high mobility, although it was transported, as a rule, by horses. 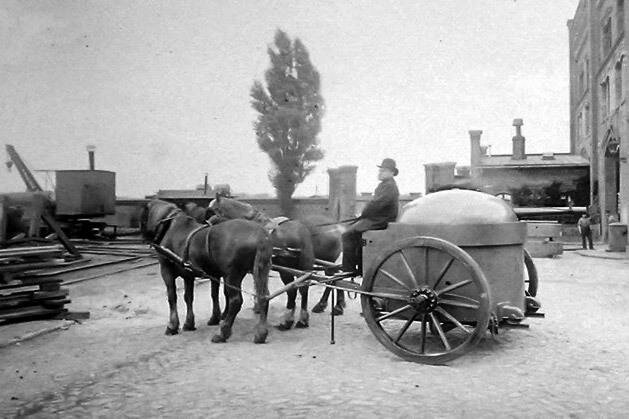 In general, this combat vehicle has become a real bridge to the world of tanks. By the way, in Switzerland, Schumann's armored carriages were removed from service only in 1947, although in this country they were still used in a stationary and not in a mobile form.

First one is a development of the amphibious vehicles developed for the U.S. Marine Corps during the Second World War. They are ungainly. BTW, it is actually a self-propelled howitzer, not a tank. More here.

Second one never saw active service IIRC. It was a prototype designed for clearing minefields.

First one is a development of the amphibious vehicles developed for the U.S. Marine Corps during the Second World War. They are ungainly.

Second one never saw active service IIRC. It was a prototype designed for clearing minefields.

According to the first, this type of armored vehicles was adopted in 1953. Like most other amphibious assault vehicles, the LVTH6 was used for combat operations, especially in Vietnam, by the US Army Marine Corps. In the future, a fairly large number of these armored personnel carriers were purchased by India, where they were altered and they received the nickname - "Child of India".

I have 2 more funny copies)) 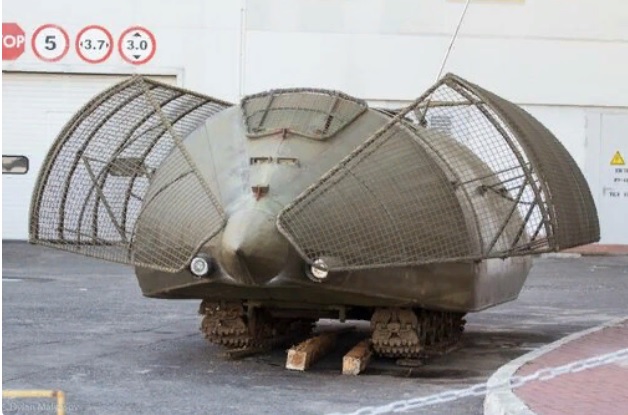 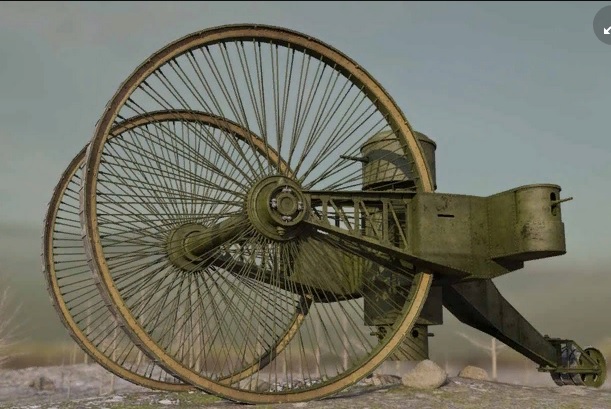 The 105mm variant of the LVTH was from 1957 forward. It is a "descendant" of the LVT series of tracked amphibious vehicles developed for the U.S. Marines. I suspect the ungainly appearance has much to do with the need to operate both on water and on land. Note how large the Soviet PT-76 was, a "light" tank. Again, I think it was the need to be able operate on inland waters that led to the unusual design.

Yes, there are many unusual designs to be found. Some are perfectly absurd in their appearance.

Ngl, Schumann's Armoured Carriage would have been a nifty bit of kit in the early 20th century considering the common attack strategies back then were basically "run at the enemy in large numbers and hope for the best".

You really are an asset to ATS Mr Troll. You post things that many of us wouldn't even think to post. 🍸

posted on Oct, 22 2021 @ 11:01 AM
link
Imagine playing BF1 and these big wheeled buggers come rolling over your trench

Ha ha ha !!!
My built-in Yandex translator translated the word "buggers" for me as "homosexuals". It's funny))) In Russia, such monsters do not trust homosexuals. Their place is in closed clubs, and no army))))

I'm sure you're aware of that though.

We don't use it in that context anymore. It's now watered down and used as a general term for something that is formidable.
edit on 22102021 by Wide-Eyes because: Expansion

originally posted by: Wide-Eyes
a reply to: RussianTroll

I'm sure you're aware of that though.

We don't use it in that context anymore. It's now watered down and used as a general term for something that is formidable.


Of course I know))
It's just that the technology of my communication on the forum is such that incoming messages are translated to me by the Yandex translator built into my browser, and I write the answers in the Google translator. Sometimes it turns out very funny how to make artificial intelligences "Ok, Google" and "Alice" from Yandex to talk to each other)))

Well that wasnt the intended reference but lets go with this one:

vulgar slang•British cause serious harm or damage to. used to express an angry or dismissive attitude to (someone or something). "I'm all for living life to the full and bugger the consequences"

In the literal sense, the word "bugger" was correctly translated.

I know the careful and fragile handling of these terms in the West. Everything is much simpler in Russia. Many words that in the West carry a negative and even offensive meaning in Russia are just names and designations. For example (I do not want to offend anyone), the word "negro" in Russia means only a person with a dark skin color and nothing more. And there are many such words. Therefore, the difference in translations of the same words in different translators can be funny for a Russian person, and sometimes offensive for a Westerner. I apologize for any possible misunderstanding.

Yeah we are ultra sensitive because feelings of weak people!

Eta: Gotta admire the amount of guns though.
edit on 23102021 by Wide-Eyes because: (no reason given)