page: 1
18
log in
join
share:
gortex
+5 more
posted on Sep, 10 2021 @ 01:05 PM
link
3,000 years ago a skilled craftsman made this stunning gold pendant to be worn by a person of high status , 3,000 years later the pendant was discovered by a metal detectorist buried but undamaged in a farmers field in Shropshire so now we get to see the skill of that ancient craftsman , luckily for me it was discovered in the County where I live and has gone on display at our local museum so I can get to see it in person , at the end of this year it will go to the British Museum in London where it will form part of their Stonehenge exhibition. 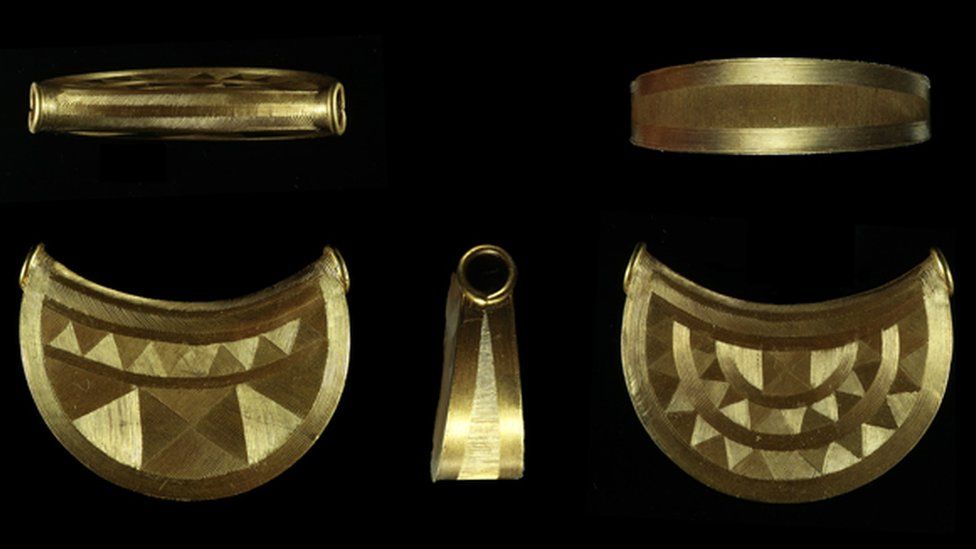 The pendant was likely buried with the high status individual as part of their grave goods but their grave and remains have long since been lost to time , we can only guess at who the owner was but it was likely a chieftain of a local tribe.

The find has been described as "one of the most important finds of the last 100 years" by Jill Cook , head of the department of Britain, Europe and pre-history at the British Museum.


Mr Greenaway said he loved history since he was at school and began metal detecting nearly 25 years ago.

He said he had already made a "good selection of bronze age finds" before discovering the pendant.

"On this particular day, I just looked up and saw this raised area of the field and I thought I'll give that a go and then within an hour I'd discovered the sun pendant," he said.

The find has gone on display at the Shrewsbury Museum and Art Gallery, where it will stay until 12 December, before being moved to the British Museum.

Mr Greenaway said he found the pendant buried about eight inches (20 cm) under the soil.

"I held it in my hand and looked at it and thought 'it's perfect', and I was reluctant to turn it over.

"I thought it would have a big scrape across it, or a hole or something and I paused and then I turned it over and the other side was better.

It is in incredible condition.

Amateur metal detectorists have found so many wonderful things in recent years that show us how sophisticated our ancestors were.

I haven't seen any other pictures but I think I know the field where it was found from the description given by the metal detectorist and the fact I saw activity in the field this Summer which I thought at the time looked like an archaeological survey , I pass the field 5 times a day on my delivery round and from memory the activity lasted a couple of weeks , I've not heard of any updates yet.

Edit
Found a couple more pictures and some info. 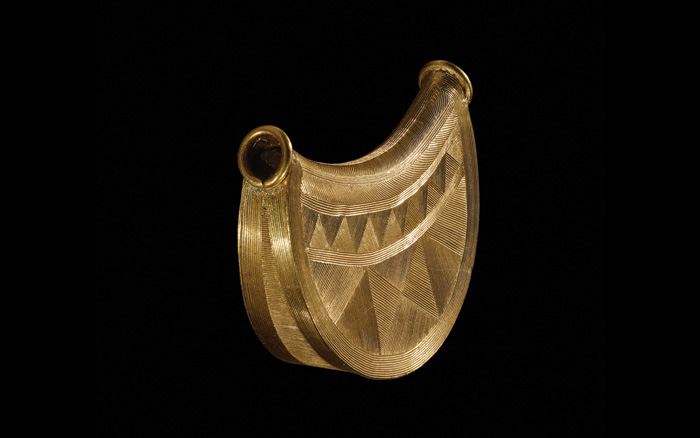 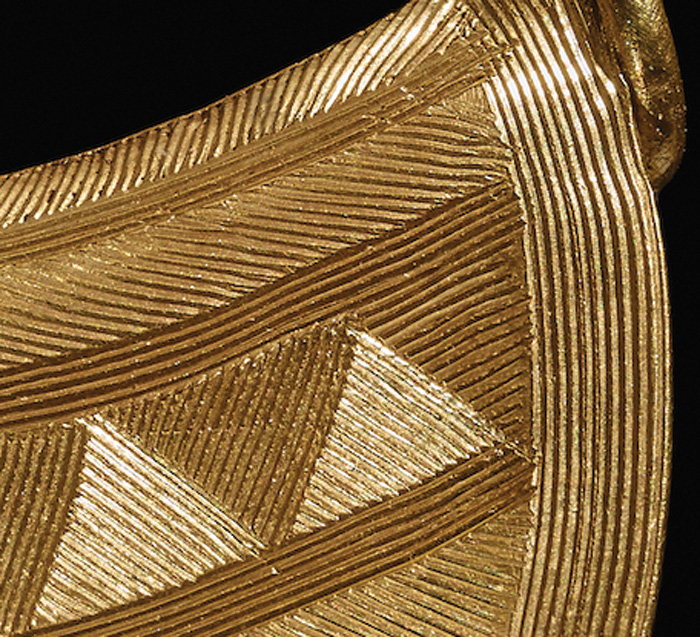 Seen up close, the workmanship of the pendant is breathtaking. Its patterns of tiny triangles are filled with a texture of diagonal lines etched in alternating directions so that, as the light plays over its surface, different elements stand out in an almost rippling effect. ‘If you imagine this being worn in bright daylight, or in flickering firelight, it would have had a great impact: a solid object that seems to be constantly moving,’ Peter said.

These radiating patterns of triangles are known as ‘solar’ imagery – motifs that feature on diverse objects spanning a broad swathe of the Bronze Age, some of which are over 1,000 years older than the bulla. These include the ornate, paper-thin crescents known as lunulae, which were made in the early Bronze Age, and a 3,500-year-old copper-alloy ‘solar disc’ that was found in Ireland and recently rediscovered in the stores of the British Museum (see CA 345; a similar object is also known from Denmark). When etched into gleaming gold, the sun-like effect of these markings is enhanced tenfold.
archaeology.co.uk...

posted on Sep, 10 2021 @ 04:23 PM
link
Thank You for posting this! What a fabulous treasure.
I am so glad it was found and has been on display in your local museum. In my opinion it should stay there for the local people to cherish!
Back in 2003, once I had learned to walk again with a prosthetic after an accident at sea took my left leg above the knee, I came to England on metal detecting tour sanctioned by The British Museum. We spent two weeks detecting the vast fields Sou’east of London. What a beautiful country! England is my ancestral home, now I’m called a Swamp Yankee from “New” England.
We had archaeologists from the museum on sight every day and all finds had to be brought to their tent for cataloging.
There were quite a few finds seized as national treasure.
I found a dozen or so stamped silvers, my favorite coin being from the reign of “The Virgin Queen”, Elizabeth.
My top find was a Viking, bronze, tin coated rope swirl ring that was declared to be from the 8th century. Ten feet away my friend found a Viking, “Thors Hammer“ silver pendant that had intricate gold swirl inlays in the hammers head, this was seized as treasure. To be honest, I was kind of bummed because had my friend not come over to see my ring I probably would have found the pendant myself.
Oh well, that’s how it goes in the detecting world.
One morning I decided to take the day off and I took the bus into Norwich. The outdoor but under tent market was amazing!
Never before or since have I seen anything like it.
The people were all kind as can be, very helpful, and I was even invited to lunch with two couples to a near-by pub.
Food was to die for! The reason they invited me was because one of the men was also a commercial fisherman and once they knew how I lost my leg we talked for an hour until his wife said, “I’m famished, let’s take him to lunch“.
I could go on and on but I’ll cut it short.
Thanks again for this wonderful OP!

posted on Sep, 10 2021 @ 10:38 PM
link
Wow, what a beautiful piece of craftsmanship. It could stand shoulder to shoulder with any other era's jewelry. Nice find and thanks so much for posting it. It's amazing how much stuff like this keeps getting found.