Kleopatra is a truly unique body in our Solar System

page: 1
15
log in
join
share:
gortex
+3 more
posted on Sep, 9 2021 @ 02:08 PM
link
Kleopatra is a curiosity like no other in our Solar System ,first spotted a couple of decades ago the 168 mile long Asteroid lives in the Asteroid Belt between Mars and Jupiter , it's been nicknamed the dog bone Asteroid for obvious reasons and comes complete with two orbiting Moons , AlexHelios and CleoSelene , named after the children of Egypt's Cleopatra and thanks to the European Southern Observatory's Very Large Telescope we now have a picture of the family group as they travel through their orbit. 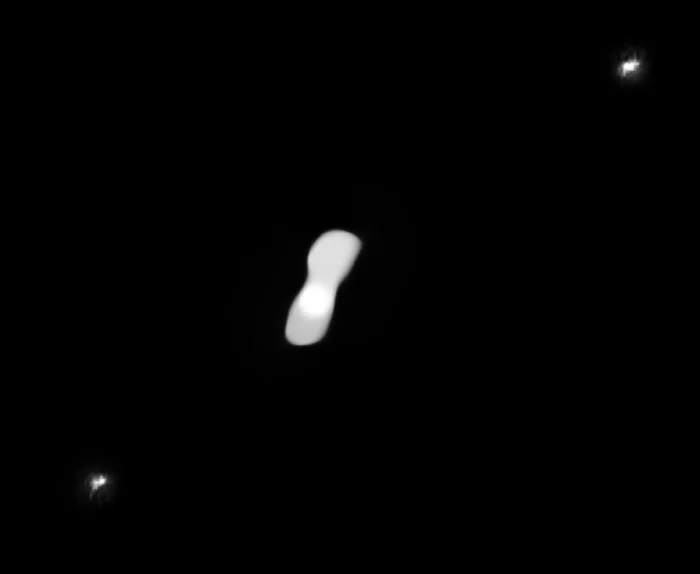 In two studies published in Astronomy & Astrophysics, astronomers used new images of Kleopatra to obtain a more accurate set of measurement constraints for the asteroid, developing a new 3D model, and more accurately defining the orbits of AlexHelios and CleoSelene.

The work was conducted using observations obtained with the powerful SPHERE instrument attached to the European Southern Observatory's Very Large Telescope in Chile. As Kleopatra tumbled through space, the researchers were able to obtain images from different angles.

From this, they were able to determine that Kleopatra is roughly 270 kilometers (168 miles) long, with one of its dumbbell lobes larger than the other, and that the two are joined by a relatively thick neck. The newly described dimensions then allowed the researchers to calculate Kleopatra's volume.

From studies done of the Asteroid astronomers have determined that Kleopatra is likely a rubble pile Asteroid and the Moons are probably from that pile , or it could be an Alien Satellite keeping on eye on us.

Orbit of the asteroid Kleopatra.

Once you have the mass and the volume of an object, you can calculate its density. Using the results of Brož and his team, Marchis and his colleagues then recalculated the density of Cleopatra. Assuming that Kleopatra is metal-rich, the asteroid's density turned out to be very low.

This can tell us something about how Kleopatra formed. Low density suggests that the asteroid is rather porous – a loose "rubble pile" of bits of rock barely hanging together. Such rubble piles are thought to have formed when material is flung out from a parent body during a giant impact, gradually reassembling over time.

If it is porous, Kleopatra is barely holding itself together. The asteroid has a faster-than-average rotation period of around 5.4 hours. That period is just on this side of stability; were it to speed up, the centripetal force would tear it apart.

This state of critical rotation means that effective gravity at the equator is low, and material in this region could be lifting away from the asteroid.
www.sciencealert.com...

It isn't going to hit us and it isn't a ground breaking discovery but it is a truly unique body in our Solar System which to me makes it an interesting object to be shared with anyone looking for something interesting , so there it is.

Yes, it is interesting. But no, it is not an alien artificial satellite. At that distance its emitters would have to be powerful enough to have been detected long ago.

I was joking about the alien satellite bit , guess I should have put a winking emote there.

Thanks for this post, I love this stuff and its so refreshing to read about something other than politics, Considering I really only read rather than post.
Thanks again.

posted on Sep, 9 2021 @ 03:14 PM
link
I recently saw something very strange, about Orion, and Pleiades. They are very unusual, in that the stars are bound together in those systems. Most other systems, such as the big Dipper, and pretty much all the rest, look like the stars are near each other, but are actually nowhere near each other( Millions of light years apart?)

That is really rare, and I guess scientists didnt discover this about Orion and Pleiades until the 19th or 20th century. Maybe if they had consulted the Bible, they would have known thousands of years ago, since it says the stars in those two star systems are bound. As you probably already know; when scientists thought the world was flat, they once again should have consulted the Bible, since it says the Earth is circular.

posted on Sep, 9 2021 @ 03:54 PM
link
Every body in the solar system is unique in some way. There's probably billions of examples of bound stars tho. Stars are glowing particles of dust. We are dust living on non-glowing dust. It's all dirt. Stop being interested in rocks and do your homework