posted on May, 16 2021 @ 02:20 AM
link
Space debris has reached a critical limit around the earth. Last week chinese satellite fell into the Indian ocean north of the Maldives. There has been discussions what to do with that debris, should thay junk be estroyed with laser or what to do about it. Still every week some more stuff is being sent out there.

There is a intresting webpage where you can see all that debris in 3D, also STARLINK can be seen there .. just imagine 12000 more satellites to it when it is finished.

Can you spot ATS 1 satellite ?

It is so sad what we have done to earth and our space :/

Maybe one day soon they'll be too many and start a massive chain effect collision.

originally posted by: Trueman
a reply to: dollukka

Maybe one day soon they'll be too many and start a massive chain effect collision.

Gonna be a great lightshow

posted on May, 16 2021 @ 07:34 AM
link
How would a laser do anything to the debris but make it worse? Instead of trackable chunks, low Earth orbit would be filled with orbiting dust. This would sandblast the working satalites to death.

A flake of paint almost took out one of he space shuttle by penetrating the windshield.

Each price must be removed somehow by deorbiting them. Smashing or vaporizing them is not an option.

Kinda reminds me though of that tv show, defiance. where space debris fell to the earth is deathly showers of debris.

posted on May, 16 2021 @ 08:20 AM
link
Next will be space terrorists, launching low obit rockets dispensing thousands of copperhead bb’s to cause havoc on telecommunications and satellites.

originally posted by: WakeUpBeer
With all that debris, how come more things like the space station, or satellites, aren't being hit all the time?

But a collision could happen by some of the unmapped trash and start a chain reaction of destruction.
Some say it is just a matter of time.


That, and it's kindof a big area.

Even if they weren't flying at different elevations, it is still a larger area than the entire surface area of Earth.

posted on May, 17 2021 @ 12:26 AM
link
a reply to: dollukka
The civilized thing to do is to have a plan to either de-orbit the satellite (for example, send it into the pacific ocean where it won't destroy any buildings on land), or else send it into a "graveyard orbit".

I think satellites launched by the US typically do one or the other. For example SpaceX has plans to de-orbit the second stage of it's Falcon 9 rocket, but when that fails it could hit land as happened earlier this year, when one fell in Washington state. 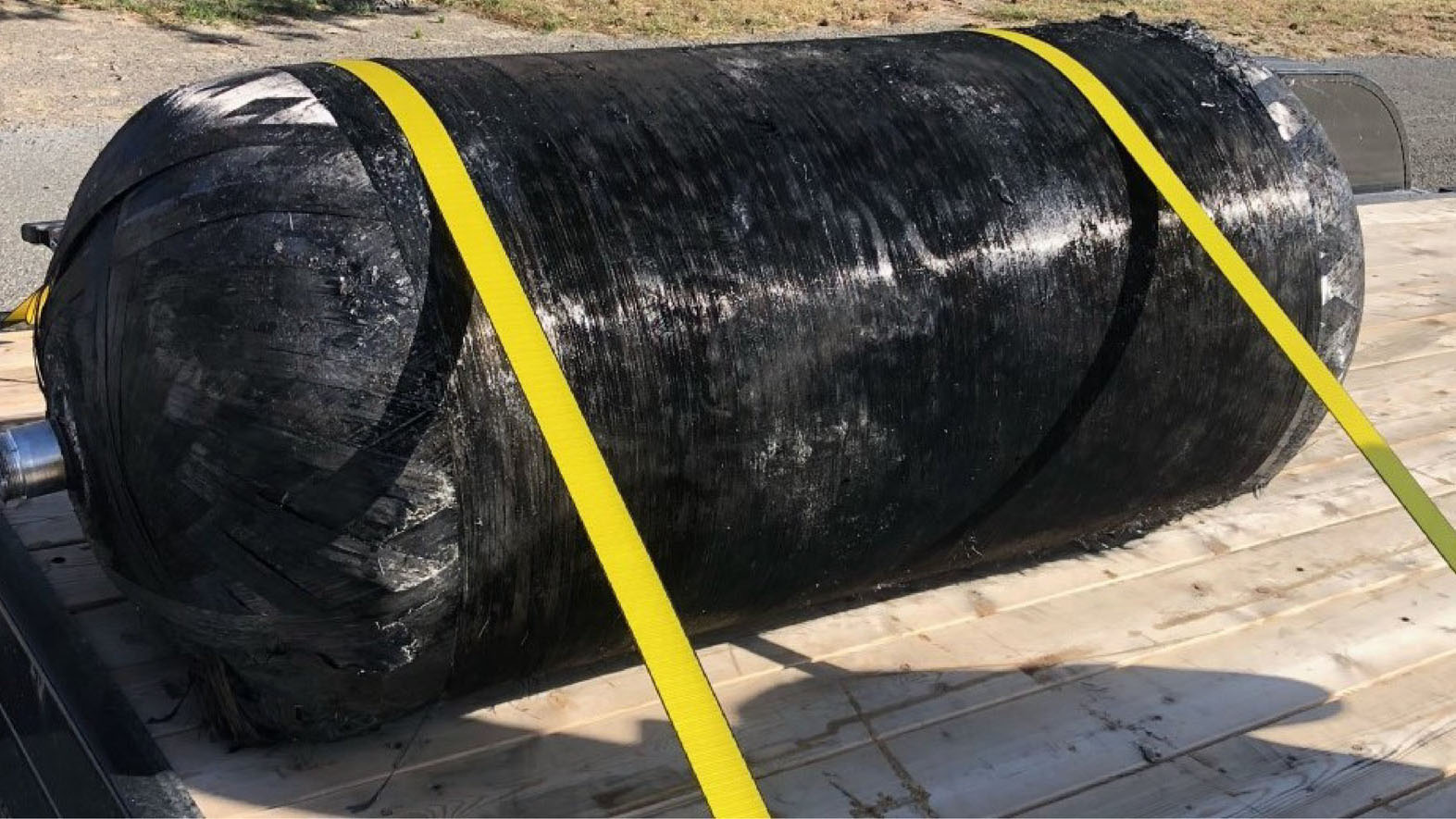 This pressure vessel, which came from the second stage of a Falcon 9 rocket, fell onto a farm in central Washington, local authorities reported April 2, 2021. (Image credit: Grant County Sheriff/Twitter)...

At least SpaceX has a plan to de-orbit their second stages properly, something China should do with its large boosters. As we see, the rocket parts don't always burn up completely on re-entry as China claimed.

First, much of it is moving in different directions, so getting into the same orbit as the debris to grab it requires a dedicated mission, and that's only one piece of literally tens of thousands. You can't really change directions in space. You can go up or down, but essentially an orbit remains pretty much the same direction.

Second, you can't blast it because all that does is create a bunch of smaller debris, and even a very tiny piece of debris the size of a pin can disable a satellite or spacecraft. Much of this debris is moving at considerable velocities (i.e. 14,000+ mph), and when you consider the closing velocities with another craft these velocities can double. Doesn't take a very big object, traveling at 28,000 mph, to do considerable damage.

Third, if you break up a piece of debris you effectively reduce the total mass of the individual pieces. Many orbits eventually decay, but they do so based on mass. If you reduce the mass of an object by breaking it up into many smaller pieces you actually increase the length of time it can stay in orbit. Unfortunately though, the decay times for some of the space junk up there is in the hundreds, or even thousands, of years. Breaking it up only makes it longer.

And yes, there is the distinct possibility that mankind could 'pollute' our near-Earth space environment to the point where spaceflight from Earth is no longer possible. And yes, there is also the possibility of a "cascade" event, where one piece of debris hits another, breaking both up into hundreds of projectiles, which then impact even more debris, creating exponentially more projectiles...and the process continues until a shell of debris encircles the Earth preventing passage through it without being struck.

Thanks for explaining just how difficult it is to clean up our near space.

Surely with all the boffins and resources NASA, satellite related industry, China etc have at their disposal they should be able to think of something that would at least improve the situation.
With our reliance on satellites I would have thought it was a bit of a priority.

It seems we never learn.

And this, but anything is better with bacon.

posted on May, 17 2021 @ 01:37 PM
link
Good money for somebody who wants to do some high-altitude garbage collection. If there were even just a few dozen little remotely-piloted satellites that would fly around and nudge or disrupt the orbits of the space junk and either send it out into space or burning up in the atmosphere, I could see a lot of folks interested in that to protect their expense satellites.

Unfortunately, that's a lot easier said than done. Unless you get into roughly the same orbit as the space junk, then you're on a collision course with it. There's really not any middle ground to speak of. And, because it's all moving in different directions at different velocities, it would be next to impossible to intercept more than a couple objects at any one time. Those little remotely controlled garbage collectors would be fragged into tiny pieces if they collided with objects in a different orbit. Then you've just got even more space junk flying around.

It's a pretty nasty little problem to solve, honestly.

Spaceborne lasers hold some promise (at least in theory), but there's going to be a heck of a lot more space junk up there before they figure out and refine the targeting systems and where to get that much power.
edit on 5/17/2021 by Flyingclaydisk because: (no reason given)

originally posted by: WakeUpBeer
With all that debris, how come more things like the space station, or satellites, aren't being hit all the time?


I guess it's because there may be a lot of junk up there, but "up there" is really huge and spacious (as it were). It's kind of like when we talk about the Asteroid Belt. Yeah, it's a thing, but if you were actually in it, you probably wouldn't even see an asteroid, much less be hit by one. Vastness.

On the other hand, it might happen more than you think, but up to this point has never done any catastrophic damage.
edit on 17-5-2021 by Blue Shift because: (no reason given)

originally posted by: Flyingclaydisk
a reply to: Blue Shift
Spaceborne lasers hold some promise (at least in theory), but there's going to be a heck of a lot more space junk up there before they figure out and refine the targeting systems and where to get that much power.


I remember reading something about that. It might help with the little stuff, lost wrenches and bolts and stuff, but the amount of power necessary to push one of those big obsolete spy satellites out of orbit would be enormous.

And of course for the garbage collectors in orbit you'd have to figure out a way to economically modify their orbit to intersect the junk, which would require a big chunk of energy. Or a big sticky spider web thing.

Anyway, Elon Musk sized money to whoever can make it happen.