We wrestle not with flesh & blood...[powers & principalities]

Jesus taught "The Kingdom of Heaven is within you"

Something just struck me regarding the battles that we as humans can experience in the depths of our soul; the way in which our mind is our own kingdom, providing a forum for debate or an arena in which battles of various sorts can be fought. In my case, there is a constant war of attrition as the backdrop in my soul, with frequent skirmishes being fought day & night.. I am a dreamer with rich vistas of all manner of sorts being spread out before me each & every night. It is often the case that I find myself locked into a bizarre anti-logical fete of pandemonium, captive to a narrative that is not my own, battles which make no real sense yet which sap the fullness of energy from me, taking away my liberty in scraps & scrapings night by night. Despite my unwillingness to go along with these complex & winding narratives, I find myself trapped in the labyrinth, strangely obsessed with somehow finding a 'win' within the oddities that I face.

It is now my conclusion that when the Lord said that the Kingdom is within you, He wasn't being allegorical. Our Heaven is within our mind, soul & spirit, and it is ours to claim & oversee in accordance with the righteousness with which we are bound over along the Way with reference to the deeds & dreams of our earthly lives. It is wrong to consider a Heaven 'out there' until we have somehow dealt with those worlds within us, bringing them into alignment with the visions of Heaven that our conscious selves aspire to during our lucid waking moments in life. For me, I find myself accosted & victimised in my dreams, and this is a near-constancy which erodes my confidence & saps my strength. Occasionally the Lord will provide me with a dream that gives me such great inspiration that I am sustained by its message for weeks, months, even years.. But then, it is back to the grindstone to wage this bizarre clockwork-scripted petty campaign against tyrants which love to stand over the near-defeated warrior to gloat & attempt to insipre terror.

I am certain that the presence of such entities breathes life into the reality that we are literally faced with powers, principalities, rulers, thrones of wickedness in high places, etc. These things know that we are in their territory, behind enemy lines, and they work to erode, trick & wrangle the looks of a defeat out of the victory that our conscious selves more or less know ourselves to possess, If we are not against the Lord, then we are for Him, and we may find ourselves facing sinister opposition, a captive to their macabre & twisted shenanigans. It seems therefore to be a moral imperative that we are to work our way into lucid control of our dreams, to evade the magical flute which causes us to dance through their scripted dream worlds with no control over the narrative, literally hypnotised to follow the route they have planned out for us.

ATS, if you have similar dream experiences, where nightmares & folly seem to sap your courage, where campaigns of attrition wear you out so much that you are more tired on waking than you were when you went to bed - wake up! Work out how to do it, then get LUCID in your dreams, defy the hypnotising magicians, the dark powers in high places. If you face such opposition then you are clearly on the right course, in some sense, and so you owe it to yourself, and to God, to wrest control from the oppressors, and find a way to overcome their nocturnal influence.

I am now certain that when the angels go into battle against a foe, it means that they must enter the labyrinth of the controlling power, to overcome the traps & illusions which entrance & entrain - one alone may fear to tread, because of the severe danger to lose one's coherence of mind, if one is trapped & tricked by powers which remain significant, with no pushovers enthroned in such worlds.. This is why Gabriel made a point of telling the prophet Daniel that only Michael had ventured to enter the maze alongside him, on a rescue mission, to bring aid to Gabriel as he entered the lair of the controlling Archon which ruled over Persia. This was a powerful fallen angel, controlling a huge empire, with great skill in casting illusions & stocking up on demon-infested traps. The fear of being thus trapped must have kept other spiritual powers from entering, hence Michael had special dispensation or a weapon that would overcome the worst of what awaited them.

We ourselves face illusions & traps in our dreams, if we are on the side of the good powers of this universe, and for some these actions & entities will cause power to spill over into waking life, making things more difficult to manage when our perspective is limited to a humanistic point of view. If we trust in God, then we are strengthened for the task as in Isaiah 41

So do not fear, for I am with you;
do not be dismayed, for I am your God.
I will strengthen you and help you;
I will uphold you with my righteous right hand.


Godspeed ATS, get lucid & get going!

Thank you, yes I had been aware of that. I've had some pretty terrifying experiences as a result.

posted on Dec, 19 2020 @ 05:10 PM
link
The horror that has been felt in dreams has no comparison in the history of human evil.
Pure fear.
With out the correct authority, and 'equipment' no one stands a chance.

Lucid dreaming is occultic if you are not doing it with the sole intention of communication with Father God. Surround yourself with prayers and ask God to surround you with his holy warrior angels before you go to sleep. Also rebuke all evil in the name of Jesus before you go to sleep. This will stop the experiences you have been having. One cannot serve two masters (as the Bible says) (said with all respect) and expect to only have pleasant experiences. I will pray for you.

Without them you are surely lost....you Houses of worship have been infiltrated and bastardized @ the highest levels.

Speak loudly and listen for the echo....is it there......or do you yell out loud only to find your voices muffled and silently pushing the night.

We, especially us conspiracy theorists, are the white rabbits running the maze and tunnels.

We humans mostly all dream in the corrupt lower astral.

The white rabbit is the alter ego of the white stag, the opener of dimensional gates.

This is an important key to the stories, for the chase after the stag is a hunt for the return of the sun

Because the astral dream dimension is a higher dimension than here, and the dimensions manifest from the top down, inside to out, most of the control system is operated from there.

All the dimensions are primarily internal, then manifest externally.

The black lodge is no different.

The phrase “black lodge” has different applications. The first and foremost meaning relates to our subconscious, unconscious, infra-conscious mind. We have our own black lodge within. It is all the egos in us that have all of our energy, consciousness, and matter trapped in servitude to desire.

Mk-ultra has been used on a global scale.

Alters within a Monarch system are not allowed to stray from the path assigned to them. If they try to move out of their assigned spot in the mind, then they encounter traps, mazes, tunnels and demons just like in the movie Labyrinth. An internal world of a Monarch’s mind will have brick walls, doors and vortex tunnels just like in the movie. When the girl falls into a vortex, she has magician hands all over her. Monarch victims speak of what vortexes are like and they often describe hands coming out of no where.


The maze is also our trapped Goddess, our right brain pattern recognition consciousness, the fire of Kundalini 🔥 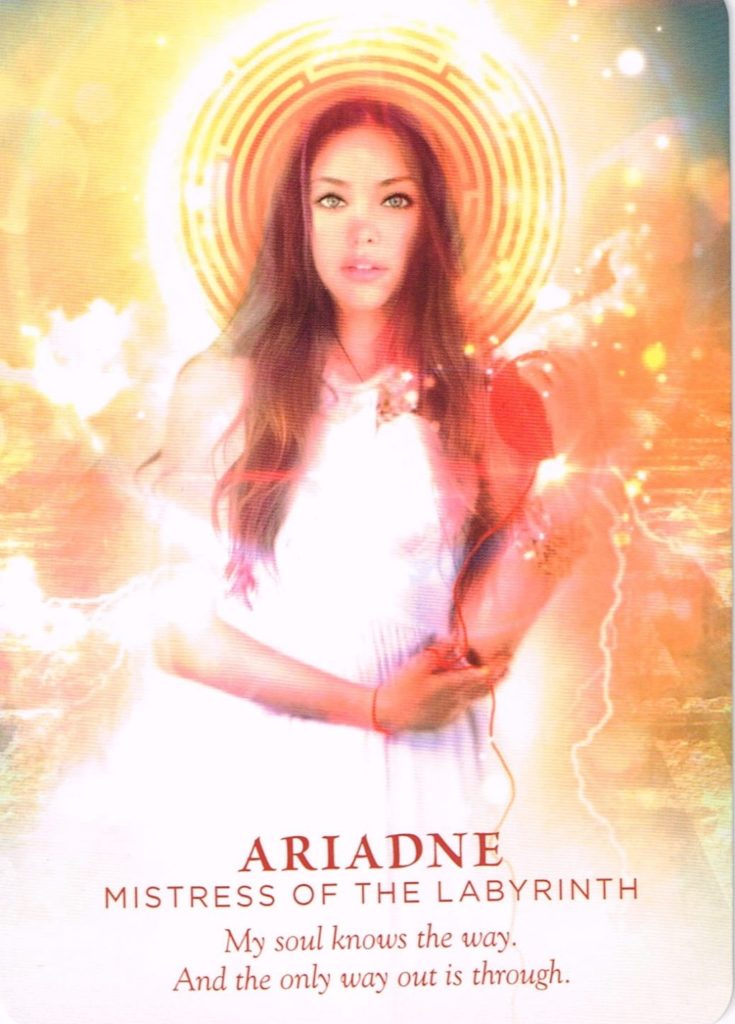 Gurdjieff said we are all food for the moon -


Your advice is good OP

We need to get lucid in the dream.

Then receive the fire of the Goddess and the Sun of the Christ, and burn our internal demons, pranayama.


This also defeats the external manifestations.

posted on Dec, 22 2020 @ 12:42 PM
link
Just to say thank you all for your responses.. I've had more malevolent encounters over the past few weeks, confusion & misdirection, fighting every night it seems.. However, I have been having those 'higher' dreams as well, interspersed between the darkness, where I know God is shepherding my spirit in the night watches.

Last night I had a complex & uplifting dream about being the armourer for the Queen of the United Kingdom, creating & assigning weapons for her guardians.. In the dream I split off & became another character, it was a weird dual consciousness sensation, but I was essentially both the armourer & one of her guardians, and part of me was combatting a French 'bad actor' who was trying to do her harm, and I ended up cutting the ties that held us up (myself & the Frenchman) so that we would both fall to our deaths far below (we were travelling high up in the sky, I assume it was a reference to air travel by plane, or perhaps it was a metaphysical allegory, I'm not sure. I remember simply bowing to her before we fell, and as we hit the ground, I woke up.

I felt at peace & positive, knowing it had been a holy dream which clearly had some deeper meaning, though it eludes me at this time. I often find the answer to meanings later on, well after the dream itself. Time will tell. I will update if I can discover the meaning. Again, thanks for the excellent replies, stay safe in that sub-lunary plane. I know that's mostly where I dream, behind enemy lines so to speak. I don't know the purpose of it yet, but again, perhaps time will tell.

It takes bravery to bare your truth for all.

In doing so, you do the works of our Father.

I can't shake the feeling that I've seen those eyes before.