posted on Nov, 3 2020 @ 07:57 PM
link
While doing some research on the Gobi I came across this photo of an ancient city on a deserts in Inner Mongolia tourism page. 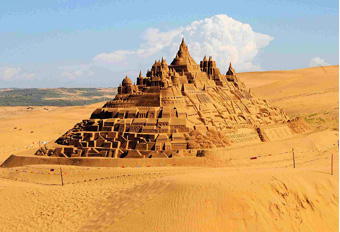 Can anyone here identify it? Can't find any other pictures.

Seems rather spectacular, enough so to be famous.

Anyway, it's likely I'm just having a bad search day or something, or is it another Chinese cover-up?

Is it a miniature, or cgi?

If it’s ancient, it’s in an amazing state of preservation. From a distance, it doesn’t appear eroded.

If you look around it, you'll see where a chain has been put up around it. If it helps, the background shows vegetation on some hills so it's at the edge of the desert. Might be able to spot on Google Earth.

Possibly, sort of depends if the poles in the foreground are telephone pole sized or fenceposts. In that case the prayer flags hung from the wires would also have to be minature .

CHINA has a number of mysterious pyramids hidden in the overgrown countryside, reportedly "guarded by the military" to prevent them being probed, but experts think they could be key to understanding more about the country's ancient history.

Too many Caucasian giants lying about the place.

The skeleton of the tallest mummy discovered so far is about 2.3 meters, and the coffin is about 2.8 meters long, but medical experts say the man may have been even taller when he was alive. In addition to features similar to those of ancient Europeans, such as blond hair and high cheekbones, many of the mummies or skeletons have large frames, more than 2 meters tall," said the 40-year-old, who was one of the first experts to explore the site in 2003 at the request of local farmers.

If those are footprints in the foreground of the picture then I think the city really exists. What city it is I have no idea.

I bet it is one of the sand castles on Yuesha Island.

It's a sand castle for sure, here's a bigger pic.

Yuesha Island (t 悦沙島, s 悦沙岛, Yuèshādǎo) is the location of the resort's sandcastles and sand art, both those made by tourists[7] and a large gallery of major works, the Desert Palace of Fine Arts. There are more children's, soccer,[13] and volleyball areas, as well as swimming pools,[33] the Rainbow Theater, and professional gymnastic, acrobatic, and hiphop performances.[27] A "desert beach" area includes beach umbrellas[27] and space for sun and sandbathing during the day[28] and stargazing at night.[20] There are camel caravans to the Xiansha Island area to the east; to the south, the miniature train reaches Xiangshawan Port and the Liansha Island area.[13] The train also passes by an outdoor performance exhibiting traditional Mongolian life on the steppe.[27]

posted on Nov, 3 2020 @ 09:24 PM
link
China has quite a few pyramids I guess, info from some people I knew that were allowed to go and see a few of the old structures. China does not want a lot of people going dig around them because they do not trust them. They don't want archeologists stealing stuff like they have done in India and other nations around the world. The archeologists take them and bring them to other countries to display them, that does not benefit China. India has some beautiful old cities out in the wilderness too, very detailed architecture. I know a guy who makes movies and he has been there and made a movie for PBS. He is getting old and does not do any movies anymore, he did a lot of documentaries on ancient civilizations around the world. That is life, you get old and all your knowledge gets lost, his movies were popular for a few years, now they are buried and not many people even know about them anymore.

You should google the guy, his name is Lee Pennington, he also wrote many books and is an excellent speaker. My wife is facebook friends with him, I just see him every year at the archeology conferences. I don't know if he was the one that was in China to see the pyramids, that might have been Sam from the Bosnia pyramids that was there. I also know a guy from the ancient aliens show and another guy who produces a magazine and another that does another TV show. I am surprised how nice those people are and they by no means act as they are better than the rest of the members of the group, they are all pretty much normal everyday guys and women.
edit on 3-11-2020 by rickymouse because: (no reason given)

I think you are right, thanks, well caught

Looked him up on YouTube and found this,
youtu.be...
got something to watch with dinner tonight now

Well it's not Xanadu.

Mongolia is very cold in winter, can be very warm in summer and is dominated by open grassland's so beloved of horsemen.

There are probably many ancient runes lurking undiscovered under the step but only some are known and it is a vast territory spanning beyond both the official borders of inner and outer Mongolia.

But yes that look's like a very well made and intricate sand sculpture to me, almost fairy tale like as well.

People can create some amazing things with sand, think of it like those monk's in Tibet and Nepal whom spend sometimes month's make intricate mandala's only to them brush them away.

Ha, the stately pleasure dome, that is cool, didn't know it's location was established, or that it was being excavated.

Mongolia is certainly a fascinating place, full of secrets and mysteries.

There are burnt out cars and planes around some of the symbols, further fuelling speculation about a sinister military purpose.

Used to look around this area a bit on Google Earth back in the day.
edit on 4-11-2020 by primalfractal because: (no reason given)

It seems to be a sand castle ( for tourism ) in Xiangshawan.

You can find it advertised at this link. 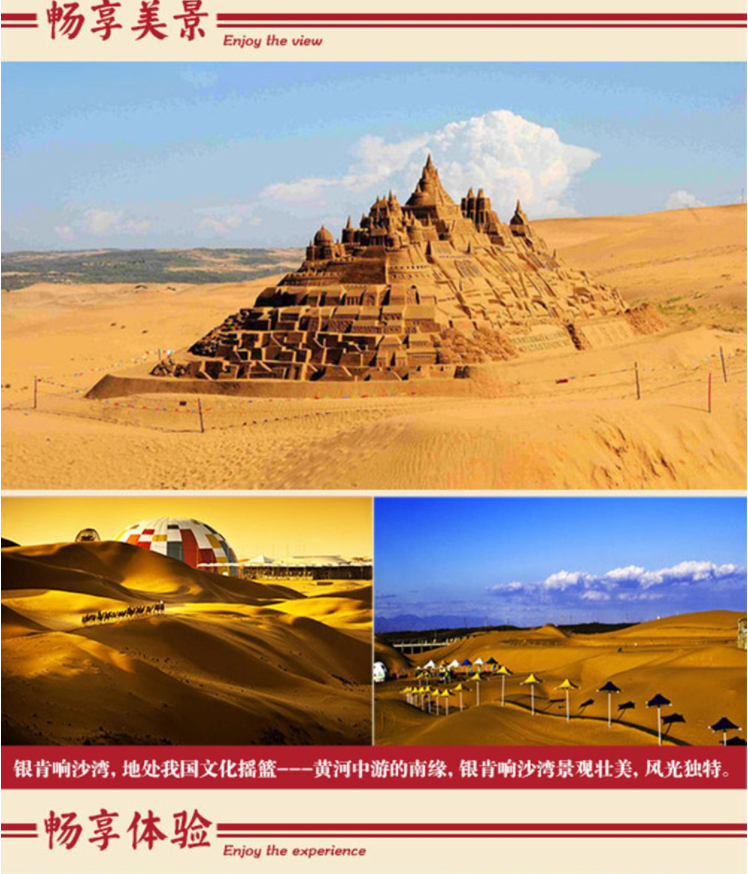 Here is a picture of a similar sculpture, where the bunting barrier can be seen in the foreground.
Source -> Xiangshawan Sand Sculpture Park 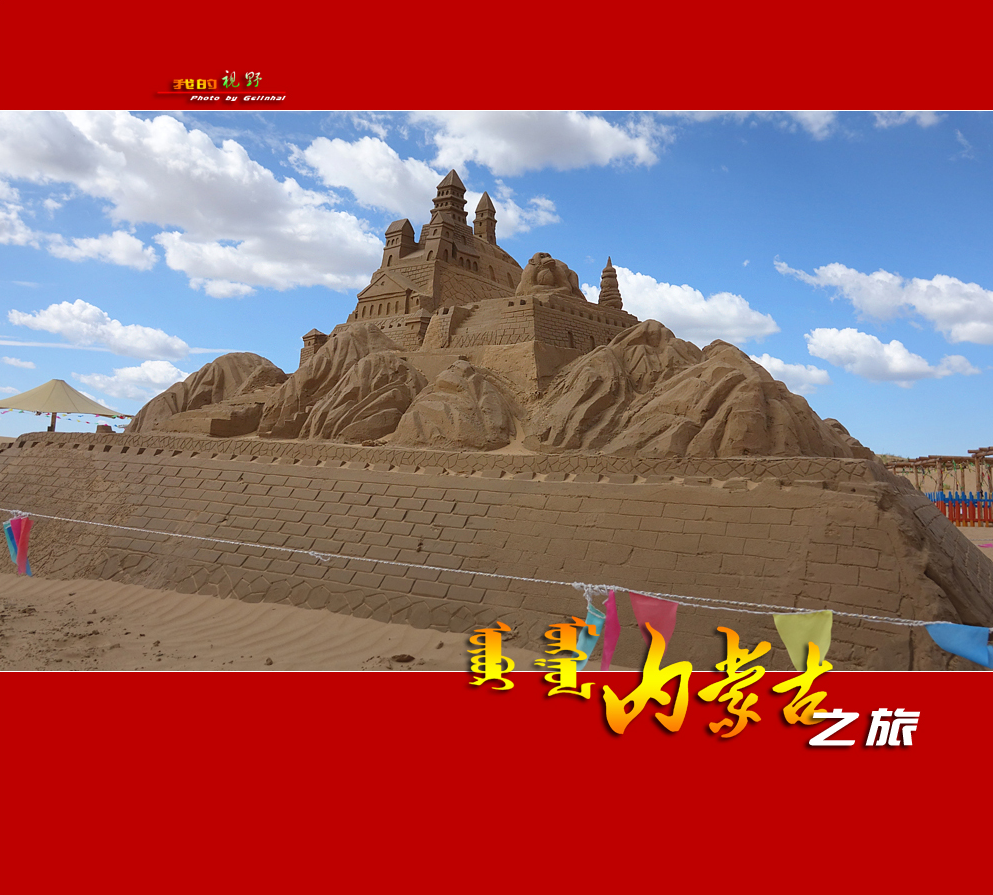 I'm not sure for Mongolia and spectacular ruins unless they pre date the Mongols (Uighar, Scythian, etc).

The Mongols only really built Karakorum and Xanadu, apart from "caravanserai" for travellers and Yam stations for messages.