posted on Oct, 28 2020 @ 09:37 PM
link
Happened in the last couple hours so I couldnt find a link but if you look on Spotify you can no longer see or listen too Alex Jones recent appearance on JRE.

I was under the impression that Spotify was going to allow Rogan complete creative freedom when he made the switch, but they censored older episodes and now they’ve removed this new one. I’m not sure what recourse JRE can take but surely there must be something they can do to stop this blatant censorship.

Well, my first thought is that he can give the $100m back and tell them to stick it. He was already pulling in a reported $30m+ before he signed with Spotify.

Spotify needs him more than he needs Spotify. I think deep down he is regretting his decision.
edit on 28-10-2020 by jtrenthacker because: (no reason given)

posted on Oct, 28 2020 @ 09:46 PM
link
Still on YT as of me typing this. Not sure when the last episode is on YT thought it was supposed to be September alas still showing there.

posted on Oct, 28 2020 @ 09:55 PM
link
Really sad. Going by this madness there can no longer be any conspiracy shows. Even scientific theories discussed. It all has to be "verified" by someone who you know, verifies things because they are a professional verifier.

posted on Oct, 28 2020 @ 09:56 PM
link
Yeah, I think I'm going to cancel Spotify.
A little too woke with the flashing of lesbian blm popups on my paid subscription.
I'll just go back to my own collection.
It is higher quality flac stuff anyway.


Good episode by the way.
edit on 10 by Mandroid7 because: Added

Fear has closed down many of this and made other's tippy toe fearing reprisal's of one form or another, many are blocked by some nations as well of course and in the supposedly free west the internet has faced growing control's both corporate (under copyright excuse) and government.

Some censorship is necessary to clamp down on suicide video's, child abuse and drug dealers using the net for there own end's but YouTube has gone too far, Spotify will never have the saturation that YouTube has.

But that does not mean YouTube will last forever, it will in time collapse as it alienates it's user base more and more as the days progress and corporate idiots both out of touch and having no moral backbone of there own close down the wrong sites while letting the quality of the rest of the site go down as a result.

It is only a matter of time before many of these video sharing sites face the same ultimate demise as there predecessors such as Real Network's etc.

RealNetworks AKA Real Player still exist but are no were near as front line as they once were, by contrast YouTube makes it's living by being front line so if they lose that they lose there entire business model.

Given there poor choice of which sites to censor under the fake news banner targeting conspiracy sites etc they have it coming anyway but still something has to fill the void there growing unpopularity will create, if there was a viable large freely and easily accessible alternative they would face a huge exodus right now so someone out there knows and see's the business opportunity this will provide, sadly that someone has to have a large amount of initial capital and some star content to get started.

Then they would have to be committed since once they started to bite into the big players share take over bid's would be inevitable and if they sold out then that would come to nothing in the end.

An alternative would be for YouTube themselves to create another site, create there own competition and play the users likes and dislikes for management and content styles that way.

I still have the audio saved.

It's ironic really, if they push him on this, they'll have only given a very noticible voice a conviction that would challenge them (if we're talking wars of ideology).

I'd hate to see it, as my guess is it could move him towards a polarity. That would be a damn shame as he's been one of the few to resist peddling true bias.

He's even said on the topic of Alex he has never fully agreed with him, but the importance of free speech is it puts out for everyone to see the display of ideas. If one is so clearly right, than it should win out easy peasy. Yet here we are.


I have spotify and I downloaded it earlier today. I seen your post and just checked if it was still downloaded and watchable and it is and is. 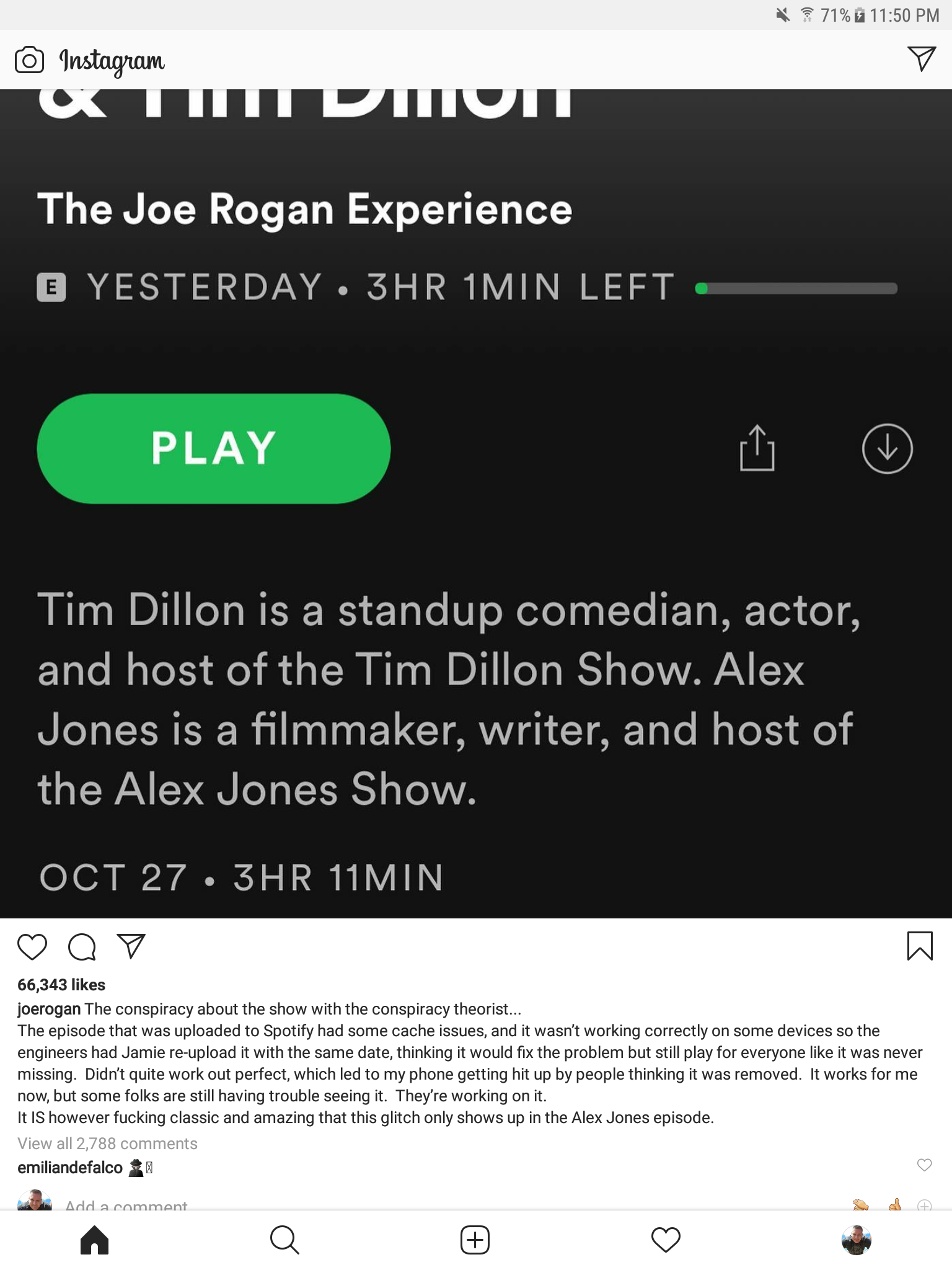 Lol, that would be classic if it was truly a no malice mistake.

I'll keep that in the back of my mind before I jump to conclusions.

I have heard a lot of rumblings that the Spotify staff is less than thrilled with this symbiotic relationship they find themselves in. I could see this one go either way, but only time will tell how it's really playing out, hopefully Joe would let us know since he's got f'k you money... Kind of weird what people will do with the thought of power over money though. And while I personally like Joe, he's human, so maybe he could fall into the trap of what someone with a voice can have.

You gotta admit, it does look like an untimely mistake. **looks left** then **looks right** 🙄😞

How do those kids say in that game "Imposter Among Us"? Looks "SUS"? 😉

But it is a perfect storm in all directions.

I'm sure many who are pissed about Jones being on the show are saying the real suspicious part is on Rogan for having him on so close to the election.... But then they'd be ignoring the fact Joe is in a new state, and a far different pool for guest who are conveniently close by. Even if they don't live close to LA, I imagine they pop in more frequently than Texas.

I do find it pretty odd Spotify would have such problems hosting the episode. But even with them being a juggernaut in the space, it is double the length of most movies, and trying to distribute that if there was high demand could be taxing.

It should seem more evident if they host it in the next couple of days. I imagine they'll either stick to their guns if they were convicted this close to an election (bare in mind it's a foreign company too, so idk if they'd hold the motive higher than money). What would be the point of them holding off for a few days though, so if that's the case it might have been a technical error. Today is day one after all.

They had to edit out the random female voice saying "relax we're here" about 2 hours and 40 mins in lol.

Watching that made me realize Alex called out that nixvm or whatever cult way before it got exposed...
edit on 29-10-2020 by SuicideKing33 because: (no reason given)

posted on Oct, 29 2020 @ 07:33 AM
link
I fell asleep listening to it, and listened to the last hour this morning. The last hour of that wasn’t pretty when he’s drunk.
Joe kinda saved it at the very end but Alex was getting obnoxious, slurring, talking over Joe, going topic to topic, then into the poor me I’m dying and the guilt of being drunk towards the end was sad.

I hope he can stop the booze and get somewhat healthy.