Does anyone have a solution on how to get that drive to be able to be formatted/read by my PC again?

I'm trying to avoid opening up the case and unpluging the power to the drives individually. I was thinking of going to a repair shop and see if they can format it for me. 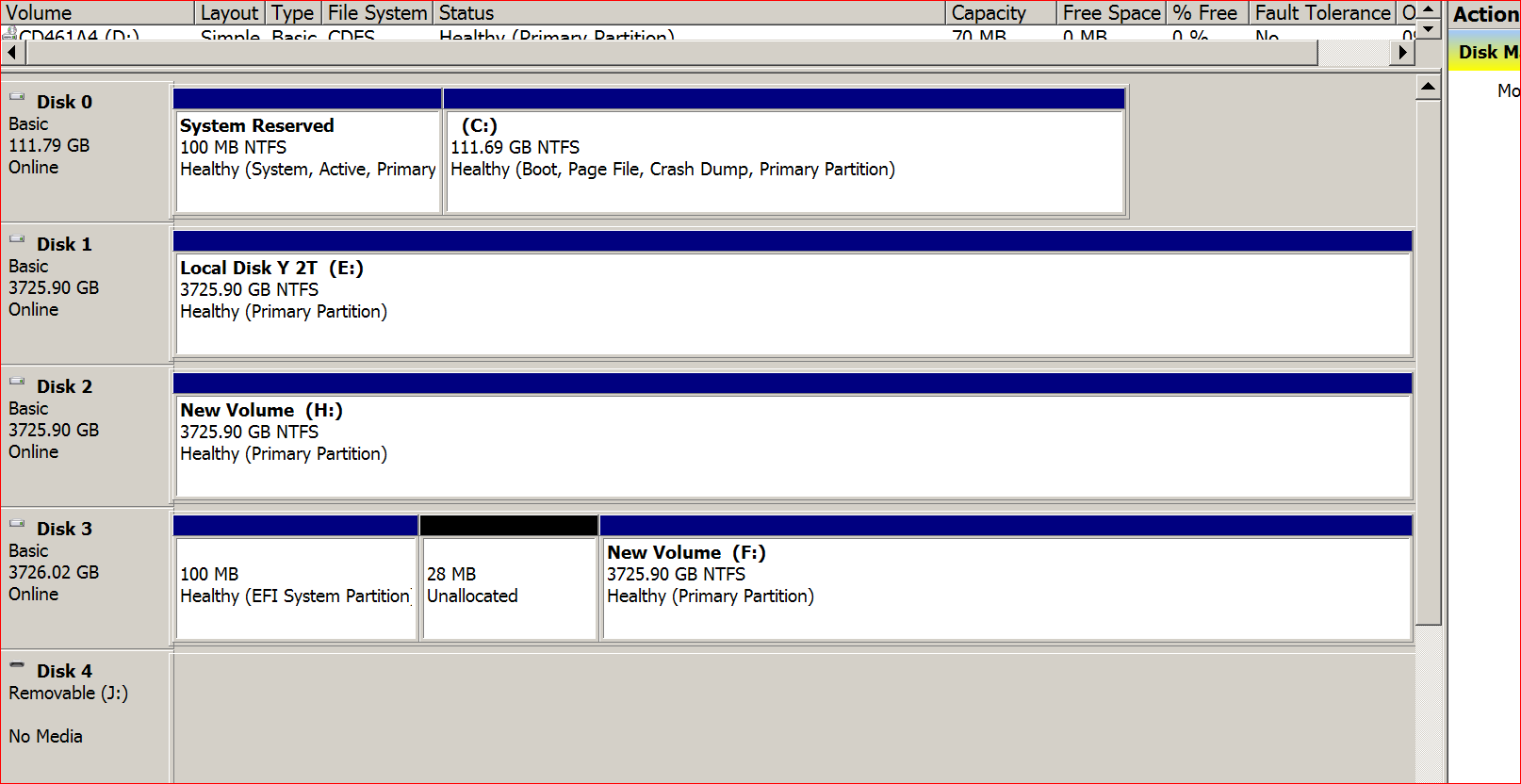 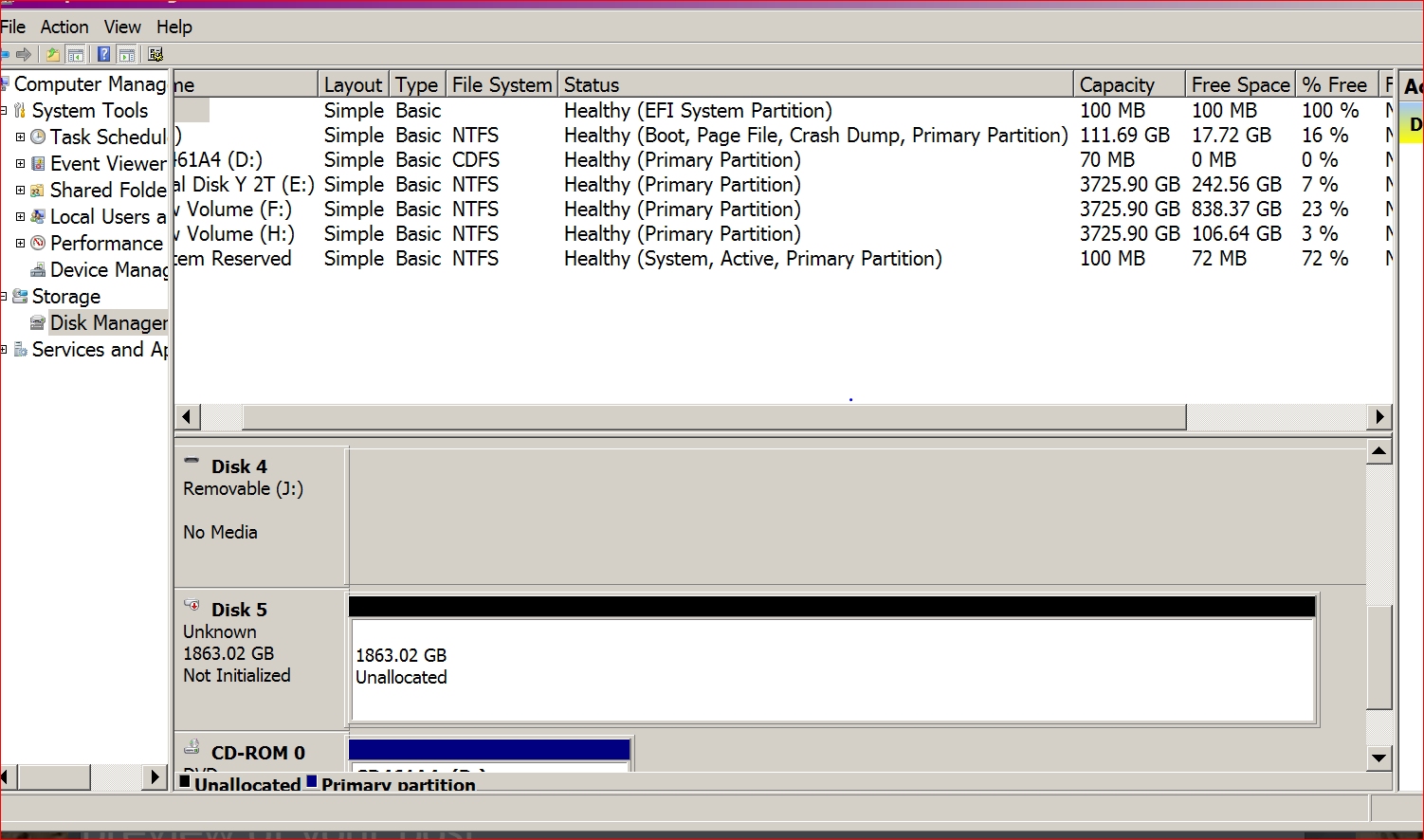 Just fired Comp Manangement console again - it said IO error but eventually worked. `1 thing I forgot to mention is that a pop up window says Initialize Disk Disk 5? Use the following partition style with MBR being already selected - when I press OK - it then says " the request could not be performed because of an I/O device error"

I'm trying to avoid opening up the case and unpluging the power to the drives individually. I was thinking of going to a repair shop and see if they can format it for me.


Can I then assume that's you in tomorrows 'The West Australian' with the crack pipe and hookers?

Serious note I work in IT though not as a tech and am unsure sorry mate - guessing you have tried google and youtube?

posted on Oct, 18 2020 @ 10:41 PM
link
Unallocated normally mean in needs to be formatted and given a drive letter.
You should be able to right click sellect format..

You could use cmd promt.
www.lifewire.com...


If it has data you want on it, you could try this..

If partition was not deleted then master fille table pooched. If you are bold enough cgsecurity has a free tool to scan for partitions and write them back to the disk but its cli only except photorec has gui. @active has a tool too if you require gui and are willing to pay.

I immediately assumed this was a recovery question. If you need to format then diskpart in cli will do what you need. You may need to convert it to gpt given the size.

HahahaI I just made a coffee thank God i didnt bring it near my PC. Yeah tried quite a few searches.

posted on Oct, 18 2020 @ 11:06 PM
link
If all you did was removing the drive letter, you data should appear after assigning a drive letter. If after adding a drive letter it says you need to format, turn off then turn on your computer instead. Not restart, turn it off and on again. Because there is a difference in how windows handles data in ram.

(if turning it off and on dosen't show your data, restart it. I might have the differences backwards in my mind)
edit on 18-10-2020 by Jason79 because: (no reason given)

1st- if solid state drive never defrag. With the memory size you have, I seriously doubt you have or would have. Just in case, this can cause drive failure.

2nd - if external drive, turn off PC, unplug then replug the drive back in to USB port. Start PC again and it will be fine.

3rd - Same applies. Take out, then re-plug, will reallocate the drive a new partition given that so many drives are in place.

Just first thoughts based on what you have said and quick fix (little info)
edit on 18-10-2020 by XXXN3O because: (no reason given)

The disk IO error thing probably means the drive itself may have failed.

I have done this type of recovery before but it is a scary thing and it was a few years ago now.

The first step is to image the failing HDD to a blank one using a bitwise copier. Usually I take out the 'good' drives to ensure they don't get screwed. I usually mark the connectors to ensure everything goes back the same way (essential if drives are RAIDed).

I find that a CloneZilla live disk is a good repo/app for doing the imaging. You'll have to Google the exact switches to make it ignore the partitions and just grab the entire drive as a bitwise image.

Once it is backed up, disconnect the image and it's time to play. As it's a Windows disk, use your install CD (if you have it) and boot until its showing a 'graphical" screen. The Shift-F10 to get a prompt up.

If the logical format isn't hosed as well, the boot and partition records can probably be restored.

At the prompt, type in DISKPART and enter and then do the following (uppercase) steps:

-to list out the disk devices. Your HDD is probably DISK 0

-where 'x' is the disk number of your HDD

-to see if there are partitions on the drive

- where 'x' is the (usually largest) volume.

-just to give it a drive letter.

Then exit from DISKPART, change to the G: drive and see if you can list a directory.

At least then you might know a bit more about what you are facing. If you can access the directory, I'd forget trying to recover the drive (which could also stuff things up worse) and would mount another drive and copy everythin you can get off the messed up drive. If there are other partitions, you could also do the same stuff and copy them off, too.

If the drive itself isn't erroring out, you could reformat it and reuse it later.

There are also some windows utils you could use to try and recover and unformat formatted logical disks, but that can be a nightmare on old and nearly full disks where the allocation chains wander off into the middle distance....


Unallocated normally mean in needs to be formatted and given a drive letter.
You should be able to right click sellect format..

I chose volume 5 and waiting to do the label cmd

Yippee Thanks ever so much. I should have asked ats 2 years ago when I stuffed it up. I got some tutorials online but they never seemed to have worked


Now to download that video to my phone as Important Info

Cool I was going to unplug the disks and put them back in 1 at a time because they show the sizes on the drive.

But I never knew about not defragging an SSD....THANKS for the warning

Jut as well I had just music and its backed up to an external.

Can I stop the process - its at 10% or can I reverse it?
back to coffee and ciagarette


Check for loose cables.
Otherwise , this disk will go out again .
Disk I/Os are the "kiss of death"

Cool I was going to unplug the disks and put them back in 1 at a time because they show the sizes on the drive.

But I never knew about not defragging an SSD....THANKS for the warning

You don't have to "defrag"
You can , but that uses up valuable writes
One "trims" SSDs

In future get minitool partition wizard.
The free version will do everything you require, much better than windows disk management.

Since more drives are giving you trouble it sounds like it could be the sata controller on the motherboard.

Maybe get hard disk sentinel (also free) to check the health and condition of your drives.
If they all come back as having 100% health you know it’s motherboard related, could also be drivers/firmware, but usually when you get io errors it’s hardware related.

posted on Oct, 19 2020 @ 04:02 AM
link
Linux System Rescue CD/USB would be the first thing I’d attempt and use the tools to check / rebuild the drive assuming there is something you need to recover on it.

I would not attempt using windows tools on a damaged disk.