The real reason why Americans are so obsessed with gun rights.

It all makes perfect sense now.

I'd personally want too have access to an entire arsenal of weapons as well, if a simple stroll in the woods involved the possibility of being hunted down by a giant "kitty cat".


Although here is one from my neck of the woods... 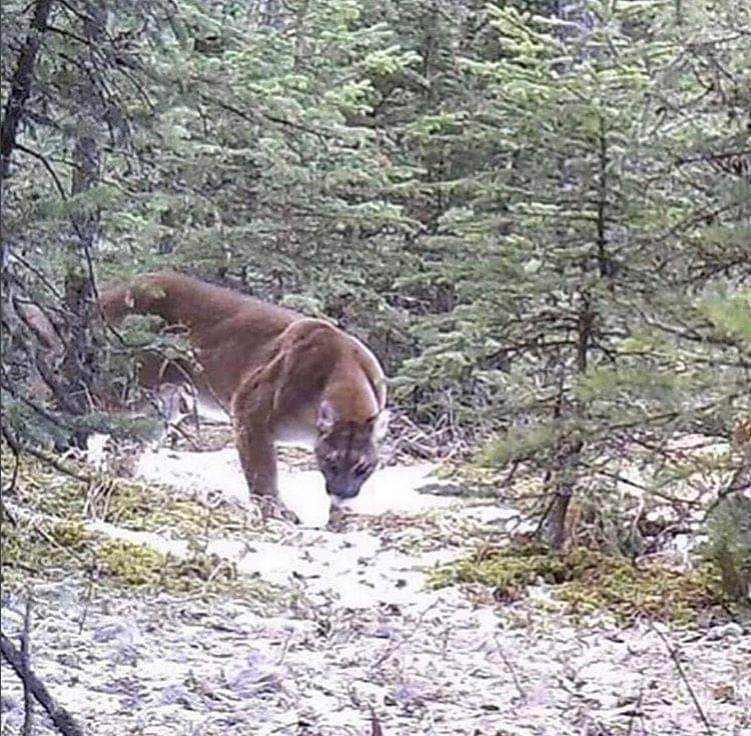 Holy crap! That thing is ripped!

Holy crap! That thing is ripped!

Literally... those are scars.

Makes you wonder how epic THAT fight must have been....

It’s actually really nice that there is a cat like that around. Although I’ve always been one of them peeps that feel the big animals should be left alone to breed while hunting the younger ones. All animals have their place and that is a magnificent specimen of a cat who has obviously had his licks. I think the reality of what nature is has been lost on a...freakin....lot of people, but, I also type this as the coyotes are getting really active outside.....


originally posted by: CriticalStinker
a reply to: Subaeruginosa

Yea man, if you're out in the middle of nowhere, pretty much gotta have a gun.

Nothing macho about it, it's a tool. When you are in certain conditions, you make sure you have the tools to be alright. When you're that far out, a phone call isn't going to do much for you, so God forbid you have to use your tool, but better to have it and not use it.

The people who live in those conditions are no more obsessed with guns than someone with a vehicle they use for work.

This is the exact reason I am wanting to obtain my license although the scariest predators (to humans) we have around my parts is wild dogs and in some areas feral pigs encroaching south. I see getting my rifle license and rifle in the same vain I do my chainsaw and knowing how to use it.

I grew up with guns. I view them like cars, we all clearly handle dangerous things, with cars every day. Going 60mph plus where one wrong move spells disaster, yet we do it all the time because we're careful and attentive.

Same thing with guns, they're really not a big deal if you're not a dumbass.

Another foreigner thinking the second amendment has anything to do with hunting or protecting us from wildlife?

Close, you got the Predator analogy correct. The issue is the biggest Predators are other humans.


The "Predators" we worry about are those who would kill, enslave, rob, or make us cower in fear by use of "said arms". That could be a Government, Organization, Gang, Criminal, etc.

The Right To Keep And Bear Arms Shall Not Be Infringed.

Holy mother of god what a beautiful beast!


Wouldn't want to cross paths with it that's for sure.

You'd better believe in fitness or it's coming after you.
edit on 10 12 2020 by projectvxn because: (no reason given)

Or you could have a meaningful discussion, there is always that, or read a little more into the post.

I love this analogy!

We put children (16 year olds) behind 4 thousand pound wrecking balls, literally. There is nothing between you and an idiot besides a double yellow paint line and hoping they pay attention most of the time.

I’ll have a teen driver in 3 years, I am already teaching them how to drive, defensive driving and general manners while driving. I can only hope it sticks

Yea the guy in the video messed up in literally the first seconds by trying to film the kitten. He should have gotten out of their immediately on seeing that...and maybe picked up a few rocks before getting chased. He finally got a second to grab a rock near the end and it sounded like he hit the cat right as we see it run off. Had he not done that I truly think he would have been dinner for those kittens.

The one thing he didn’t do that saved him, at least in the video, he didn’t turn and run. He’d a probably got jacked up if he turned and ran, that is when you are most vulnerable to a large cat.

You can’t fault him for walking through the woods and filming though, he couldn’t have known he would come across something like that. An argument could be made he should have been prepared, but whatever, live and learn!

Yeah..I would have walked out of the area like he did, but at some point you need to square up when it's following you.
He went backwards way too long imo.
That slapping motion is intimidation, not attacking. Bears do the same thing mock charging.
That lion was very dangerous because it had kittens to feed and looked very scraggly.
The scraggly, hungry looking lions are always more sketchy around people. They will take more chances.
Scary stuff
Don't hike in lion or bear country without at least some bear spray.

Bear spray, dogs and weapons. (We travel with dogs and weapons), I’ve never carried spray but that’s my preference. Never underestimate the actions of a wild momma and what it will do for its kin, regardless of the breed. I agree with ya, that cat just wanted him out of there but I can almost assure you if he turned and ran that cat would try to get him. It would have seen him (a human meat bag) and an easy one at that. We are actually very “basic” animals when it comes to the apex predators we can encounter in the wild, many of us just forget that.

Yea he was smart there. Running makes you prey or play time and neither end well for you. If you see a baby animal of any species that can significantly hurt you it's best to get away as quickly as you can as well as being very alert of your surroundings.

I've seen cats in the woods while hunting but unless you give them reason they will usually stay away from you... I often wonder if the animal weighs the fight or flight by if you run or not, obviously running signals to the animal it can defeat you or eat you or whatever it's trying to do.

originally posted by: rickymouse
The second amendment gives me the right to bear arms,


Wrong. The 2d Amendment is an acknowledgement of your natural right to arm yourself.

I wish the folks that wrote that amendment had kept it that simple. I also wish they had written something down and ratified a penalty (like loss of citizenship) for anyone making an attempt to overturn anything guaranteed in the Bill of Rights.

Square up..Is exactly what he did. I just would have done it sooner.
I wouldn't recommend it with an African Lion lol, but nearly every encounter with mountain lions, unless you are a child will be the lion seeling you as a threat.
They have some weird issues with prey drive, like wanting to chase fast moving objects, just like cats. Not good for bicyclists.
Mostly ambush hunting, not straight on. They sit along trails, up in trees and pounce on prey, biting neck from behind.
They aren't as likely to square up in an attack.
This video is highly unusual behavior.
Notice the guy call it's bluff, so to speak.
He stops retreating and throws rocks.
The bending down part made me flinch a bit though.
You want to look huge, and not a retreating prey item.
I think vacating the immediate area of the kittens was a good idea, but being followed is a whole 'nother ballgame.
If my wife was there with me, It would have been me skinning a cat.
She would retreat slowly, I would engage. Without hesitation.
I'd put a 12" blade through its eye socket.
Then probably drop the kittens at a rescue somewhere, if small enough to round up.
Generally you are safe though and this stuff is rare. A loud rucus, screaming or rocks should do the trick.
Probably a big stick would help too
I live in the mountains around bears n lions. Neither really want to mess with you.

Added.. look up the story about the jiu jitsu guy.
He used a move called a lion killer(rear naked choke) and killed the mountain lion that attacked his buddy bike riding.
Almost unbelievable
edit on 10 by Mandroid7 because: Added

An animal that doesn’t need to eat won’t spend the energy to eat. Any animal that NEEDS to eat can become the Tasmanian devil (the cartoon). I am sure animals weigh fight or flight, just on a very basic, primal level.

Yea the guy in the video messed up in literally the first seconds by trying to film the kitten. He should have gotten out of their immediately on seeing that...and maybe picked up a few rocks before getting chased. He finally got a second to grab a rock near the end and it sounded like he hit the cat right as we see it run off. Had he not done that I truly think he would have been dinner for those kittens.


Its not recommended to bend, or stoop with the large cats...it shrinks your frame and can trigger the cat like running.

Around where I live, you get a fair number of "day hikers" that like to hike with walking poles...locals callem "bait" makes ya look like a small 4 legged animal

Very true. They really are just ambush hunters. In Africa most attacks are from behind on people crouched down along river banks. It's so common they started wearing large masks on their backs with giant eyes on them.
They don't like head on confrontation.
Kinda wussy