2020 just gets better and better

page: 1
37
<<   2  3 >>
log in
join
share:
MorpheusUSA
+4 more
posted on Jul, 19 2020 @ 01:40 PM
link
Alert - new conspiracy my friends
So, I was watching Marfoogle News which is a good mix or conspiracy and open thought YT and Dlive “News” show. Marf showed a video from Israeli News Live on YT (have no idea never seen the channel) but Israeli News Live claims that he has a connection at the pentagon which is an advisor to the POTUS, told him that by September “everyone on the planet will know we are in really serious condition”. Israeli News Live has postulated an idea that an asteroid field is coming towards earth that we will see more activity in the sky and even impacts possibly in major cities.


Apparently Marfoogle has spoke with some federal auditor which told them that they had noticed a lot of money being allocated for debris cleanup through FEMA and other agencies on a large scale which could be related to possible impending impacts from asteroids/meteors. Does seem that we have been seeing more near-earth objects and comets lately.


Today 7/19/2020 Israeli News Live has uploaded a video that says he has a new credible source that confirms in coming asteroids. In the video Israeli News Live says he spoke with a FEMA engineer that has corroborated the information that Israeli News Live received earlier in time. Apparently, our solar system is going to travel through some type of space debris field of sort and will cause all type of hell on the earth. He is saying that sometime in September 2020 the first asteroids/meteors will strike a populated area and by December weather will become erratic. In March or April 2021, the Planet comet Hercolubus (something like Nibiru I guess) will come through and pop the magnetosphere and we will have a pole shift.

I have no idea of any of this just thought it would be a good conspiracy.
~Morpheus

posted on Jul, 19 2020 @ 01:53 PM
link
Mmm. July 24th we have a big one coming close. Was not detected until last month. I dunno, if I will accept this guy’s fear mongering 🤦‍♂️, an asteroid a big one, will eventually hit us and devastate some stuff.

This guy is making decisions out of fear.

Dude this guy is a joke. He does this crap all the time and in no way any affiliation with any government. He does this for clickbait for revenue.
I don’t feel like looking it up but a few years ago he swore that “Niburu” was about to destroy us all and to be prepared.
It would be in your best interest to disregard anything he says.

There is nothing "new" about this conspiracy. Every few months someone is predicting an asteroid is going to hit us. The dates come and go.

I guess like a broken clock one of them will eventually be right. Probably not this goofball though.

posted on Jul, 19 2020 @ 02:10 PM
link
a reply to: MorpheusUSA
Ya gotta be careful posting stuff like this on ATS. From here it could drift to other conspiracy sites and soon enough to FOX where Trump will hear it and cancel the 2020 election in order prepare for the coming cataclysm.


It's a good day for Terry, I managed to spell cataclysm, twice now, without having to rely on spellcheck. Have to celebrate these small victories in the face of such impending DOOOOOOOOOOOOM

I have no idea, it's just what he called it. I would assume a planet coming close to the earth.

Hmmm... the Israeli source does provide a bit different flare.

Okay so God will rain down fire and brimstone from Heaven to purge
the world of the chicon corona virus.

My world has become a batman movie.

posted on Jul, 19 2020 @ 02:18 PM
link
a reply to: Allaroundyou
Yeah, I don't watch Israeli News Live or believe most of what I read on the internet. But I like weird conspiracies and ARGs. Just thought I would share.

I would never trust ANYTHING from Israeli sources, deceit and lies are the name of the game from there, however an Earth/asteroid strike is just a matter of time, whether or not in our lifetime is another matter

originally posted by: MorpheusUSA
a reply to: Allaroundyou
Yeah, I don't watch Israeli News Live or believe most of what I read on the internet. But I like weird conspiracies and ARGs. Just thought I would share.

Fair enough I guess. I myself do watch ridiculous videos every full moon. But I for the most part or actually all part just for pure entertainment purposes.

Can check out all known Near Earth Objects at the link below.

Give it a rest already.

posted on Jul, 19 2020 @ 02:48 PM
link
I had a dream of a humonculous climbing up my grandmas skirt with a kitchen knife in its mouth, the bugger jumped off on to a stone falling from the sky next to bat boy (which I thought was totally fake in the inquirer) and those little devils ended up launching a rocket the destroyed French Polynesian missle sites and then came back to my house and pee'd on my carpet. Dirty rascals

THE END of the world is coming on September 1 - or at least, that's the belief of one pastor who noted a convergence of signs in the heavens, including that of the arrival of Comet NEOWISE.


End of the world: NEOWISE, asteroid and Ring of Fire eclipse 'sign of the APOCALYPSE'

Brought to you by the high quality rag Express (UK).

posted on Jul, 19 2020 @ 07:28 PM
link
what is the earliest warning we have ever had on a near earth object about to cross out path? I get the sense that they dont usually predict it more than a few days to weeks normally. Do we have any record of prediction months or years out?

the reason i ask is because i tend to buy into the idea that the asteroids and meteors are mostly already in low earth orbit but dont become visible until they are almost ready to hit us. Could the firmament of old have been broken up during the flood and what remains of the firmament is the debris field? (the windows of heaven were opened and the great deep was broken up, Genesis)

originally posted by: Daalder
a reply to: SaneThinking

This one is easier to understand i think
www.flybyasteroids.com... 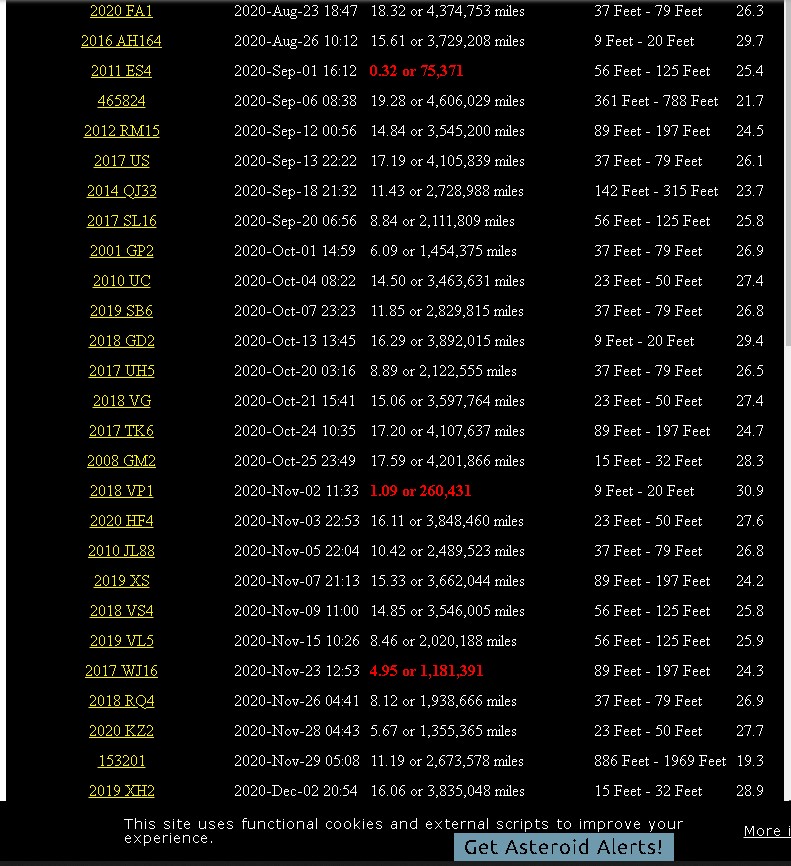