posted on May, 6 2020 @ 02:55 PM
link
A friend pointed something out to me recently, and it made me think about how much our response to news and information has changed. Have we become smarter, or have we just become more gullible and fearful? Or, has the media become more sensational and opportunistic by taking advantage of the doom-and-gloom-sky-is-falling narrative for ratings?

The Hong Kong Flu Pandemic started in 1968 and lasted till 1970. The estimates are that upwards of four million people across the globe died from this influenza outbreak. It was highly contagious, and people knew this.

Indeed, within two weeks of its emergence in July in Hong Kong, some 500,000 cases of illness had been reported, and the virus proceeded to spread swiftly throughout Southeast Asia. Within several months it had reached the Panama Canal Zone and the United States, where it had been taken overseas by soldiers returning to California from Vietnam. By the end of December the virus had spread throughout the United States and had reached the United Kingdom and countries in western Europe. Australia, Japan, and multiple countries in Africa, eastern Europe, and Central and South America were also affected. The pandemic occurred in two waves, and in most places the second wave caused a greater number of deaths than the first wave.

Yet, in the summer of 1969, half a million people gathered on a dairy farm in Bethel, New York for a 3-day music festival, now known simply as "Woodstock".


Really ?
Was it given outside of test subjects of US Air Force ?

Within 4 months? That was fast. I couldn't find that info in the article. It said a vaccine was developed but only became available after the virus had peaked.

Maybe a vaccine for the current CV19 could get developed so quickly. The media seems to be hyping a two-year window for a vaccine. Ahhh...doom and gloom for the masses---"tune in tomorrow for more and don't forget our special report at 7 PM eastern time. Be sure and tune in for the latest update."


Hilleman and colleagues received a new influenza A virus, Type A2, Hong Kong strain, that had caused widespread illness in Hong Kong. They rushed to manufacture a vaccine from the new flu strain. In four months, Merck had manufactured more than nine million doses of vaccine

Interesting. I wonder if they can make it so for this one.

But, back to the OP and the orginal questions...do you really think Woodstock would have been cancelled for Covid19 (with or without a vaccine)?

BTW, I doubt 1/10 of those at the music festival had been inoculated. I could be wrong though. I definitely know there was nary a thought about social distancing.

If anyone was around at that time, let's hear a first person account, ATS.

For this pandemic, there were two geographically distinct mortality patterns. In North American (the United States and Canada), the first pandemic season (1968/69) was more severe than the second (1969/70). In the “smoldering” pattern seen in Europe and Asia (England, France, Japan, and Australia), the second pandemic season was two to five times more severe than the first.[14]

It's very strange. Will the 'Rona unfold the same considering the USA is allegedly accounting for 50% of Covid deaths worldwide?

I would bet the vaccine didn't work.... back then the gov. was testing all kinds of drugs on people. 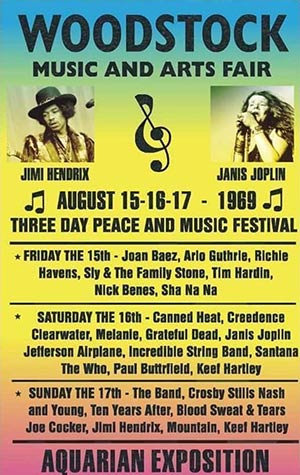 originally posted by: queenofswords
But, back to the OP and the orginal questions...do you really think Woodstock would have been cancelled for Covid19 (with or without a vaccine)?


Hippies weren't much for authority or avoiding disease from what I understand.

originally posted by: UpIsNowDown
A hippys right to party comes before anything else, look at the god dam line up....lets party!!!!!! like its 1969

I think the line up the following year at The Isle Of Wight was better.

I was at that one. The poster misses off some of the acts like. Supertramp, Donovan, Hawkwind and quite a few more. All those for £3 quid. 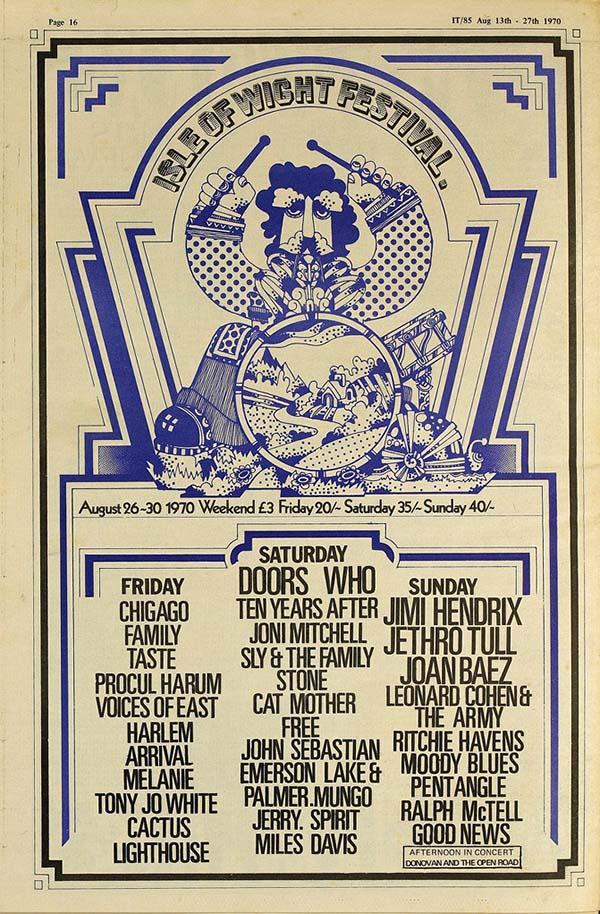 So...we beat this thing with MUSIC.

I for one am waiting for this year's "Fete De La Musique" (JUNE 21st) to blast the freedom of ROCK across the hills and valleys round here with my nice Bowers & Wilkins active speakers and a lifetime's collection of music.

Something the French invented that is just so cool....

"They" will NOT stop this freedom, even if people are locked down as tight as can be.

Your not wrong there and for £3, I was born in 1974 always wished I was born in time for those festivals, I am an out of time hippy

Been to modern festivals like creamfields when it first began and Ibiza, still got Glasto on the list, but they all have pretty much become about the £££ these days


originally posted by: queenofswords
But, back to the OP and the orginal questions...do you really think Woodstock would have been cancelled for Covid19 (with or without a vaccine)?


Hippies weren't much for authority or avoiding disease from what I understand.

That's why they still live on.

The hippies were right (on man).

originally posted by: UpIsNowDown
I am an out of time hippy

That is cool. I have never heard of Fete De La Musique. It shouldn't be a problem since it is held outside and in parks or public places. Gawd knows we need something like this to lift people up out of the doldrums.

It just seems to me that people are more easily frightened nowadays and fall prey to the predator tactics of a dog eat dog media. The fake news is out.of.control.

posted on May, 6 2020 @ 05:37 PM
link
If only SARS-CoV-2 was an influenza virus where we already had vaccines and only needed to determine the proteins (H3N2) and re-engineer the vaccine accordingly. As often as you want to believe that COVID is just another flu, it's not. They have to start from scratch. Hence the reason it can't be done in 4mos.

That is cool. I have never heard of Fete De La Musique.

The Fête de la Musique, also known in English as Music Day,[1] Make Music Day[2][3] or World Music Day,[4] is an annual music celebration that takes place on 21 June. On Music Day the citizens of a city or country are allowed and urged to play music outside in their neighborhoods or in public spaces and parks. Free concerts are also organized, where musicians play for fun and not for payment. The first all-day musical celebration on the day of the summer solstice was originated by Jack Lang, Minister of Culture of France, as well as by Maurice Fleuret; it was celebrated in Paris in 1982. Music Day later became celebrated in 120 countries around the world

It is a huge thing here in France and isn't just outside. People are encouraged to play music even to the point where I have heard a Mayor almost INSISTING people do it...lol

No money is charged for public performance and curfews are usually ignored. It's great.

I think with Woodstock, it was an overwhelming event right from the start and little control was envisaged by authorities who were surprised at attendance.

TPTB would probably not have concerned themselves with protecting those they saw as "undesirables" attending, hence, no quarantines or cancellation took place despite the Pandemic at the time.

The hippies had a great time and probably never noticed or concerned themselves with the outside world. Maybe they were in their own, safe zone.

originally posted by: UpIsNowDown
A hippys right to party comes before anything else, look at the god dam line up....lets party!!!!!! like its 1969

I don't think it's a stretch to say some horrifying virus was born during Woodstock.