I did not highlight the big amber glob of light because that's EASILY SEEN. But that shouldn't be there either and compression doesnt cause that.

These images are from a home security system that belongs to a friend of my sister. There is NO light source behind the wall and the husband couldn't see anything in their garden but the dog could.

There is no lenses flare as these images are directly taken right in front of the security monitor with no flash.

What say you ATS? I have literally no idea at all. I did some highlights myself but just on things that stood out to me. There seems to be a long armed thing in the amber light at the top. I get uneasy looking at it, knowing where it was taken.

Again there is NO light source that could have created this light, especially amber light. The street lights are now white LED and also this is the back, where there is no lights. I am NOT after recognition here either. Just think this is freaky, the lady who took the pictures is a little shaken....

If anyone could sharpen the images, feel free! 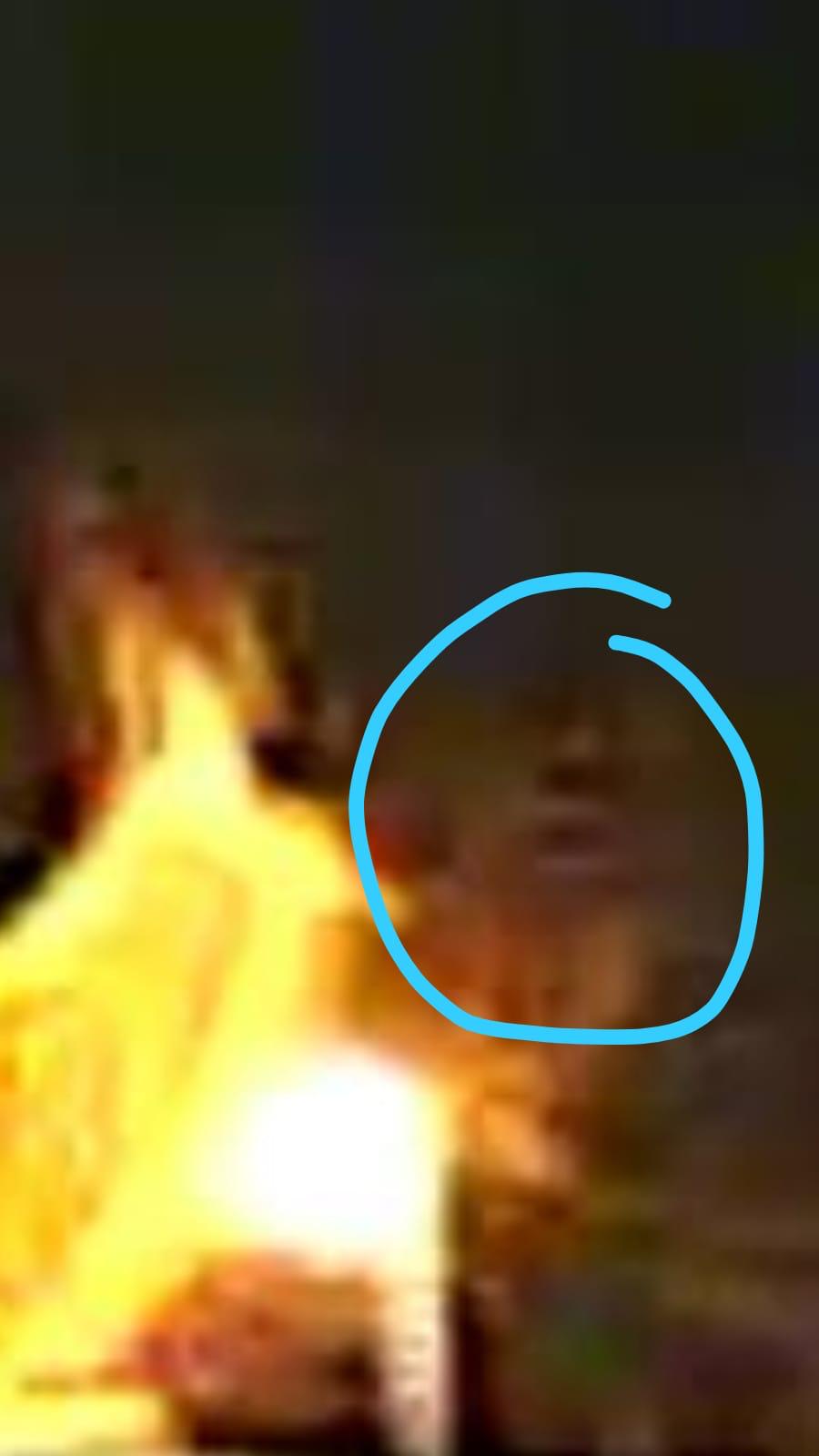 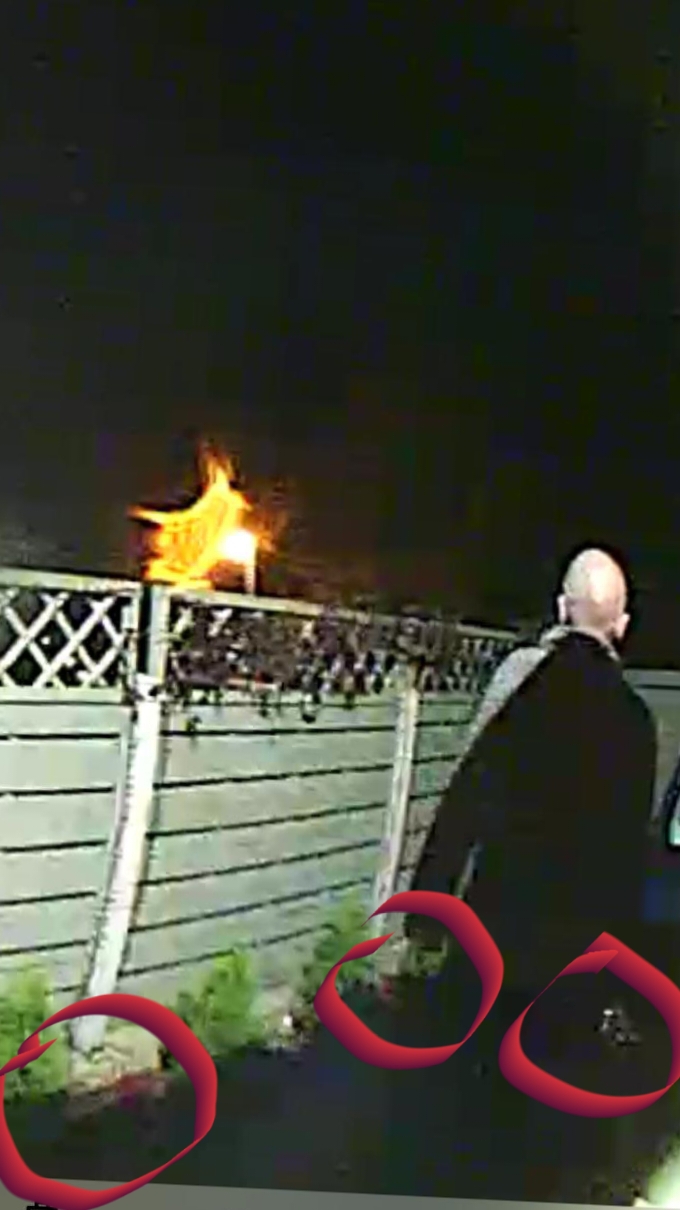 Shame no one reads the threads isn't it. Compressions doesn't cause that.
edit on 11/10/2012 by Joneselius because: (no reason given)

Yeah a lot of people have this instant reaction, like broken records. So if we venture outside the box what else could it be... Most people jump to aliens but I like the idea of elemental salamanders.
Were the pictures taken in a wooded area?

I think that your sister's friend has misled you, or you didn't understand what he was saying. There is a light there. And It looks like maybe it's distorted from a drop of water or something on the lens. He's looking right at it, and he says there was nothing there? Let's see the original footage.

posted on Dec, 16 2019 @ 03:19 PM
link
I don't really know what I'm supposed to be seeing or not seeing here. One thing looks sort of like a face. I don't know what the light or the other smudge looking things are.

No, I know for a fact there is no light there. At all.

I'm not lying. Your explanation hinges on something that you assumed is there, even though it's been clearly explained there is no light there

The only.light is the spotlight, which is white light, in the rear of the house.... that's all.

They assumed it was a fire because of the security camera, but when the man went out there was no light to be seen, at all. Nothing.

Believe me or don't I'm not lying. You'll assume I am because that makes your assumption.make sense. Oh well....
edit on 11/10/2012 by Joneselius because: (no reason given)


My.sister sent me this because she knows these people who shares it with only her. She's been in this garden, at night too and knows, for fact, that there isn't a single.light, other than their spotlight.
Otherwise she wouldn't have bothered sending it.
edit on 11/10/2012 by Joneselius because: (no reason given)

I see a few things in the pic, but it could pareidolia or...not. I'd like to know what others think and see.

My guess is that if we saw the video we would know exactly what the orange spot is, which is probably why you only posted stills.

If this is paranormal at all then the paranormal world must be extremely boring.

I really hope this isn’t what il be tasked to do in the afterlife.

I literally have no idea. I know there seems to be some pattern in the amber light, and what looks like a long armed thing there?

Its the amber light that weird me out, I didn't circle it as its pretty stand out stuff.

I think its shaped like a bird. But again, and this beats repeating, there is NO light over that wall.

This was taken from an instant capture door security system so I don't know if there is a video. The occupier took pictures because the man claimed she was lying about the orange light.

This is why the rewind and fast forward buttons are greyed out. The system was paused.

I cleaned up your image and sharpened it up a bit. I'll just say that IMO, it definitely looks like a structure of some kind being lit up by a light source, but hey, believe whatever you want. 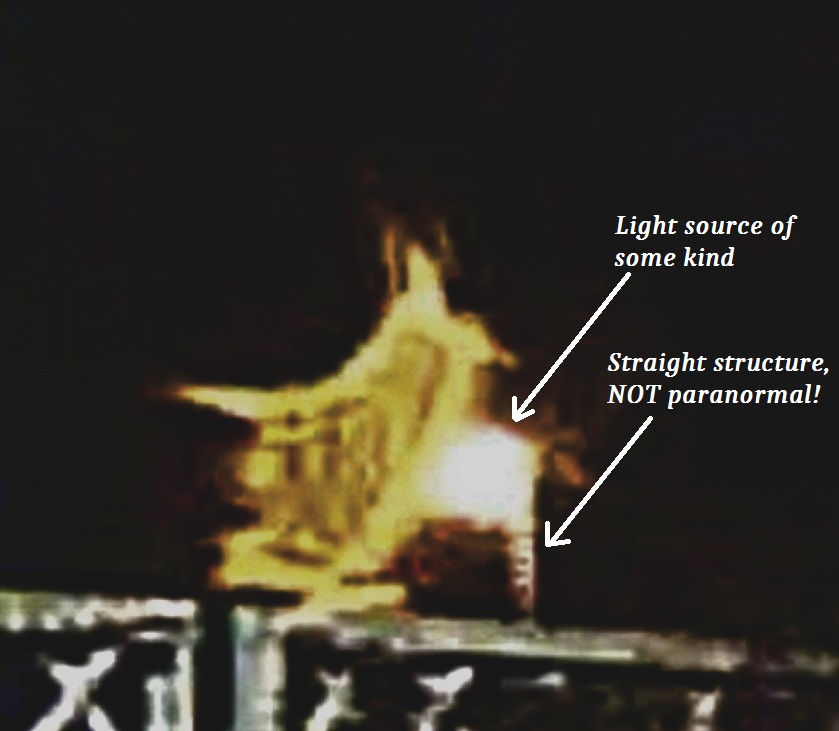 It's not me believing its you trying to assert that something is there when it ISNT.

It's not me believing its you trying to assert that something is there when it ISNT.
How many times do I have to say it.
I know what it LOOKS like but there isnt a light there.


Prove it. Get us a still image from the same strangely low security camera of the same area in the daylight. Should be a relatively simple thing, and just imagine all the warm, juicy satisfaction you'll get from laying a big "I TOLD YOU SO" on us doubters!

Ok, honestly, what do you expect any of us to do with this picture?
Ponder over a few smudges that could be anything?

What did you expect out of this?

Okay will do. Its attached to a doorbell so its not that strange.
edit on 11/10/2012 by Joneselius because: (no reason given)

You can't blame people that they want a reference. You can't say there's no light source when there obviously is a light in the picture.
What do you expect as answer? Dubious assumptions like "the ghost of queen nophretete riding through the night"?
Let us see a daylight picture of the same camera.

posted on Dec, 16 2019 @ 04:48 PM
link
Just going off of the photo it looks like the person is looking at the light source. Can’t really go off of he said she said. I’d say it’s nothing. Come back with absolute proof that there was no light source and then you’ll maybe have something.

But I can see demonic faces everywhere in this pic.

Apophenia, pareidolia or just some elemental nonsense seekers.... I don't know but the picture is cool af.

Okay will do. Its attached to a doorbell so its not that strange.


I look forward to it. See? All I'm doing is looking for confirmation from something other than the horrendously bad photo you posted. We already know that the image is obviously distorted, unless somebody is building fences with radically curved posts going up.

And while you're at it, could you find out if it was raining that night? A drop on a camera can produce some very strange shapes, even if the light source is not in the image. You can even see where some of the yellow in the center blob dips down below the top board on the fence. So was it in front of the guy, or next to him on the fence like some kind of rooster on fire?

A better photo might help us sort it all out. Thanks!