As Sondland testified, a misleading Ukraine story spread among conservatives on social media

posted on Nov, 20 2019 @ 07:23 PM
link
The article offered conservatives and Trump loyalists a welcome alternative to the day’s news.

A misleading claim about the head of the Ukrainian energy company at the heart of the House impeachment inquiry went viral across conservative pockets of social media Wednesday, receiving hundreds of thousands of retweets and shares from some of the president’s most ardent online supporters.

The incorrect story, first disseminated by the finance blog ZeroHedge, claimed that Mykola Zlochevsky, the head of Burisma, a Ukrainian energy company, had been indicted over money laundering related to the Biden family. Hunter Biden, son of former Vice President Joe Biden, was previously on Burisma’s board of directors.

In fact, there was no announcement of an indictment. Ukraine’s chief prosecutor, Ruslan Ryaboshapka, announced in October his office would conduct a wide-ranging review of all previous cases involving Burisma, and Wednesday said he was including possible embezzlement in the investigation, according to Reuters.

But that didn’t stop allies of President Donald Trump from widely disseminating the false account of an indictment, seizing on some truthful elements while wildly extrapolating others to offer conservatives and Trump loyalists a welcome alternative to the day’s news, in which Gordon Sondland, the U.S. ambassador to the European Union, implicated numerous members of the Trump administration in the ongoing impeachment inquiry.

A lie will make it around the world, before the truth can put its shoes on.
Who is responsible for this?

Within an hour of ZeroHedge publishing its story, the claim of an indictment had been spread on Twitter by tens of thousands of users. According to results on the Twitter analytics tool Hoaxy, the indictment claims were propelled by Charlie Kirk, the leader of the conservative group Turning Point USA, as well as a conspiracy theorist, Jack Posobiec, and the anonymous @BreakingNLive, an account that has become notorious for spreading misinformation. The account also boasts of being retweeted by the president.

More than 10,000 users engaged with the ZeroHedge story on Facebook, which was shared to dozens of pages that totaled more than 3 million followers.

And the Trump supporters here just eat it up and spit it right back out.

Nina Jankowicz, a disinformation researcher for the The Wilson Center and a former adviser to Ukraine’s foreign ministry, told NBC News that claims of a new indictment appear to be a misinterpretation of a press conference related to an already existing corruption probe.

“There’s been an investigation into Burisma for a long time,” Jankowicz said. “The allegations are about corruption with Burisma’s head, which have been well known for a long time.”

Jankowicz said Burisma and its owner, Zlochevsky, have been under investigation several times in the last decade. She said she believes the press conference might have been political maneuvering by two Ukrainian politicians eager to gain Trump’s attention.

And who are these Ukrainian pols?

“It certainly seems like these two guys are trying to influence that already existing investigation, probably to curry favor with the Trump administration,” Jankowicz said.

Anders Aslund, a senior fellow at the Atlantic Council who researches kleptocracy in Russia, called the two Ukrainian members of parliament, Oleksandr Dubinsky and Andriy Derkach, who pushed the new allegations, “not credible.”

“These two both are professional disinformers,” Aslund said. “This is generally known in Ukraine. This is not outstanding news. Anybody who’s anybody knows about these two. They are not credible.”

posted on Nov, 20 2019 @ 07:32 PM
link
This is the reason I don't jump on information when it's brand new. And despite what the Twitter world does, it does not reflect the behavior of most of us on the Right. Twitter sucks. It should have died a quick death when it first came out.

Sondland did recall that at one point he asked Trump what he wants from Ukraine.

Why would anyone need to take the focus off that?

posted on Nov, 20 2019 @ 07:43 PM
link
Bingo. I read somewhere years ago that when his employees asked for anything, whether it was for a raise or to bring up a problem or something else that required a serious decision, the boss said he would get back with them the next day with his decision. That gave him time to check things out. That's a philosophy everyone should adopt. Especially the media.

It's not looking good really for old Donald.

Someone should really take away his spade.

Yes it's terrible when everyone who is a firsthand witness says there was no quid pro quo and Trump told them he wanted nothing in return. Terrible.

Serious question?
How exactly do you verify that it's not fake news? Named sources? If so, what named sources? There sure seems to be a LOT of fake news outlets out there.

originally posted by: HalWesten
This is the reason I don't jump on information when it's brand new. And despite what the Twitter world does, it does not reflect the behavior of most of us on the Right. Twitter sucks. It should have died a quick death when it first came out.

Twitter was suppose to be a way to report facts on the ground. It was how Bin Laden was found. It was because of Twitter. The most accurate info is from those "on the ground". It worked but unfortunately it has since been nothing but down hill. People may or not be reporting facts. Human nature and no way to fix it. 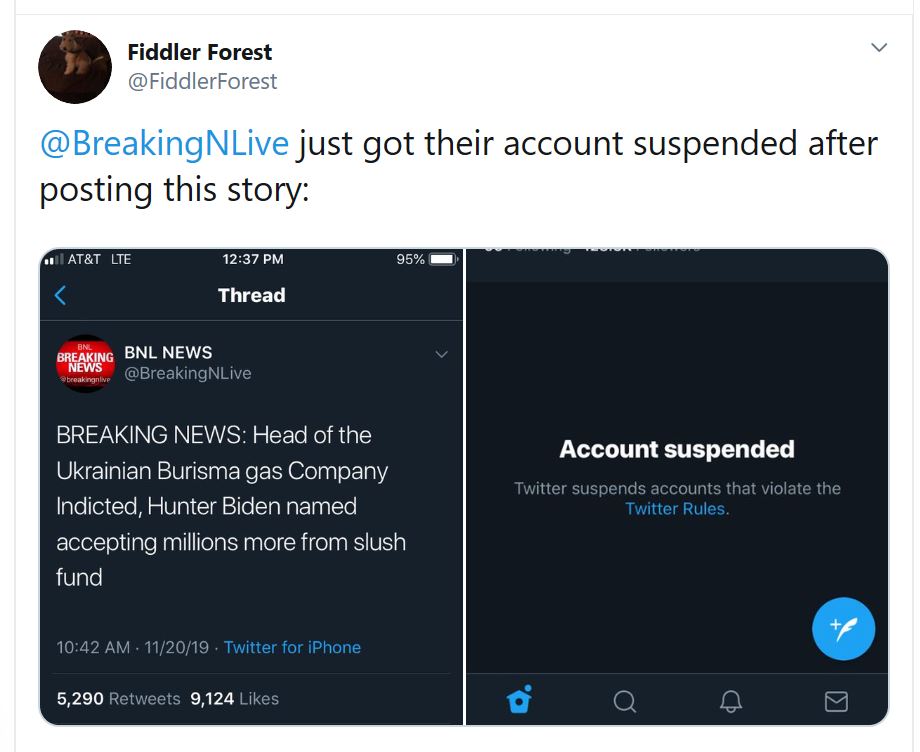 Sondlands testimony painted the same picture as the rest of the witnesses so far.

Time will tell i guess.

How many of Trump's ""associates"" are now in jail or facing hefty sentences?

Dodgy bastard and then some really.

originally posted by: Grimpachi
No way the timing on this can be a coincidence.

I've been watching old documentaries, debates, and things of that nature.

The only new thing I see is technology has made people's attention span shorter. The same rhetoric and mudslinging has always been around.

Gotta keep people on their teams.

One of the troubling questions at the center of the impeachment inquiry, at least for Republicans, has been the work that Hunter Biden did for Burisma, one of Ukraine’s largest gas companies, while his father was serving as Vice President. But the intensity of interest in Washington is only making it more difficult to resolve the mystery. To this day, Burisma’s connection to Hunter Biden has made it much harder for Ukrainian authorities to investigate the company for corruption, current and former officials in Ukraine tell TIME. In that sense, Burisma is still getting its money’s worth for the reported $50,000 per month it paid the younger Biden to sit on its board from 2014 until earlier this year. Ukraine’s government insists that it has no evidence of wrongdoing by Hunter Biden or his father. But Burisma, they say, is a different story. Since taking office in May, the government has sought to explore past claims of corruption against Burisma and its owners. Yet, as an unintended consequence of the impeachment inquiry, Ukraine has felt the need to treat the company with kid gloves.

Though we may disagree on impeachment, I welcome this thread

After looking into this, here I what is being suggested

Update 2: Dobinsky, the MP, says one of the leaked documents is a "signed suspicion" at 1:19 in the video below. This has been described in Ukrainian media as an investigative step which documents allegations against an individual or individuals, similar to a criminal referral. While Donibsky says during the press conference that "Zlochevsky was charged," we have updated our headline and report accordingly.

A transcription of key portions of the press conference can found here, via Tanya Tay Posobiec.

When the sources are named you can search the name and see what is coming up. It makes seeing whether it is true or not much easier.

Time is by no means a right wing source

More evidence trump should be investigating Burisma and the Bidens

Yes, the same picture, Trump did nothing wrong. Every single first hand witness, every last one, has said there was no quid-pro-quo.

I welcome that. It should happen to every agency who does this crap.