As we grab our armchairs and fume at each other, the history is in the making in our capitol. The third White House employee that was forbidden from testifying has today testified in front of the Congress as part of the ongoing impeachment inquiry.

It appears that the president's wishes and the law are not on the same page, but it is good to know that the law supersedes the president's personal wishes. The White House has pledged NO cooperation, knowing full well that such obstruction of justice could, and very well will be part of the articles of impeachment, but in the absence of any other strategy at this moment, they continue to obstruct.

So far, envoy Volker, ambassador Yovanovich and today the national security advisor Fiona Hill have complied with the law and given their testimony. Gordon Sondland is set to testify next, this week, as the fourth person to disobey the wishes of the White House, but in accordance with the law.

Fiona Hill, a former top National Security Council expert on Russia, was testifying to Congress behind closed doors Monday, the latest former Trump administration official to be subpoenaed as part of the House impeachment inquiry into President Donald Trump.

Hill wouldn’t comment as she arrived on Capitol Hill, but her attorney said she had received a congressional subpoena and would “comply and answer questions” from lawmakers. She resigned from the White House National Security Council over the summer.

She is the first White House official to appear as part of the House impeachment inquiry . Her appearance comes despite a White House vow to halt any and all cooperation with what it termed the “illegitimate” impeachment probe. The White House did not immediately respond to questions about whether they had sought to limit Hill’s testimony.

These are good news for ALL Americans. There was doubt in the beginning as to whether it will be enough for the White House to simply instill fear and hope that witnesses will not give their testimony, but we can now see that threats will not be enough to stop the truth from coming out. My hat is off to all the career professionals who are breaking with the White House to serve our country over the whims of an unhinged man.

Of course not everyone likes what is going on, and one of presidents surrogates, Jim Jordan, had this to say:

“She was going to come, she’d agreed to come, she was going to come voluntarily but he’s going to subpoena her, I believe, so he could ask certain questions and again keep those secret except for the certain things he wants to leak,” Jordan said. “The tragedy here and the crime here is that the American people don’t get to see what’s going on in these sessions.”

Of course the truth is far from Rep. Jordan's words and in reality Fiona Hill came to testify because a subpoena had to be issued. It is very telling how chaotic this time is for the defenders of the president - Jim Jordan knows the law, he knows what a subpoena is, but there are no other paths of attack here so he chooses to muddy the waters with lies and disinformation, hoping at least a few will fall for it.

The closed-door testimonies will be kept private for now to protect the integrity of the impeachment inquiry and to minimize the chances of the White House employing slander, deflection and flat out lies until the whole truth is out.

“We want to make sure that we meet the needs of the investigation and not give the president or his legal minions the opportunity to tailor their testimony and in some cases fabricate testimony to suit their interests,” Schiff said on CBS’ “Face the Nation.”

What happens if at the end of this, the president is subpoenaed to testify? Can you imagine that? 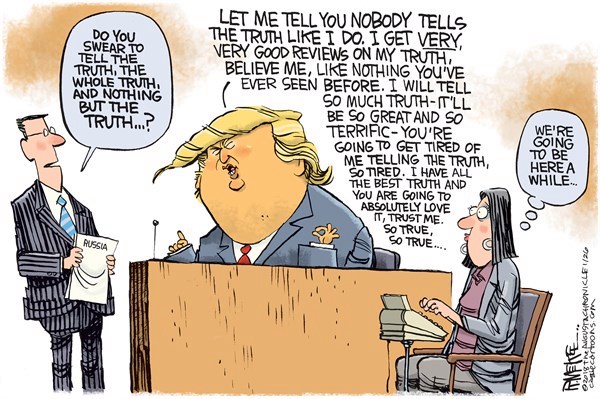 Personal note: I'm getting messaged to see if I am "Ante". I am not Ante and I don't know who that is, but thank you for the messages. It is nice to feel welcome.


meh, another CFR globalist hell bent on destroying the US soveiergnty.

Seriously if we have evidence... lets see it and impeach him, otherwise color me tired of the boy who cried wolf after 3 years.

Heck they could impeach him in the house and I still think he would win reelection since the democrats have nothing to run on beyond orange man bad I resist orange man... that's why I think its all theater they need him since they stand for nothing the average American stands for.

Or maybe they are?

posted on Oct, 14 2019 @ 02:43 PM
link
I can't say I've researched this myself, but didn't the white house plead no cooperation on the basis that the house hasn't voted to move forward with an impeachment?

The notion is ridiculous.
If there was an entire committee of people whose job it was to decide if I should be fired, and they voted I shouldn't be fired, but the people who lost the vote told me I was fired anyway... I'd also not cooperate. In fact, at that point cooperating with them would be against the will of the committee, which if I'm understanding this correctly in this case would be... treason?

Anything to do with this impeachment should be made public. Those of us that actually voted dont wNt behind closed doors bs going on. I believe the keeping it secret is just plain wrong.

Did you consider this could be his way of finding the swamp?

You all know who I am talking about.

I can't say I've researched this myself, but didn't the white house plead no cooperation on the basis that the house hasn't voted to move forward with an impeachment?

a reply to: lordcomac
what was the first thing trump said in office? " can I pardon myself"? That says it all..

none
it appears he is exercising his 1st amendment right to free speech.
or are you leaving out the part in which he is commanding the attorney general to do so?
your reference is confusing

This thread was good for a laugh. The whole government is a shame anymore and your complaining about one guy who is being bashed by most of it, it
"hates" Trump. Seems like your on the wrong side. We can hate him, and still want the BS he is pulling. If you think he will be impeaches w/o civil unrest or war; you are crazy.

Being called anti is a complement. Antideluvian is a very smart oldschool ats researcher.
Check out his threads. I might have spelled his name wrong...

Though shiff is right that the wh will spin any info. Any administration would.
I think it would still be better for the country if the interviews were open.

And it works both ways. If or when the interview is made public trump, the wh spokes person, shiff, cnn, fox will ALL spin the info. We will have a dozen different views on the truth like we always do.

At least with open testimonies I personally can make up my own mind.

The sooner you learn that no one on ats really knows what they are talking about.
The less what people say here will bother you.


what was the first thing trump said in office?

What was the first this Obama said? "All my records are sealed."