I wonder if others there will back that up.

Would have been simpler and also would have absolved the "watchers".

Wow! A real witness? Where was this pulled from? Great find!
I do Not believe he is dead.
This gets juicier minute by minute.

IAMTAT
+1 more
posted on Aug, 10 2019 @ 09:47 AM
link
With Epstein dead...there will now be nobody to object to the search warrant of his properties or file any motions to suppress evidence.

originally posted by: Zimnydran
Thank God the Clinton fortune is safe.... right everyone!!

How many people half jokingly predicted this would happen.... ?
The Clinton's arms are truly long. The deep state.... is truly deep.

In order to know the truth, you must first seek the truth. The more truth you know, the more you see the lies all around you.


I wasn't even half joking when I predicted this.

Perversely, very perverse of me, I laughed when I saw he "committed suicide". A little too convenient, I think we all know that he was "suicided". Where is the recording of his cell or the hall in front of his cell? Hmmmmm, that won't ever be seen. Jails/Prisons have cameras everywhere. But I bet they won't release who went in or out of his cell or when - because according to the official record - no one did. Let's all have another laugh.

There was a tragic fire tomorrow. 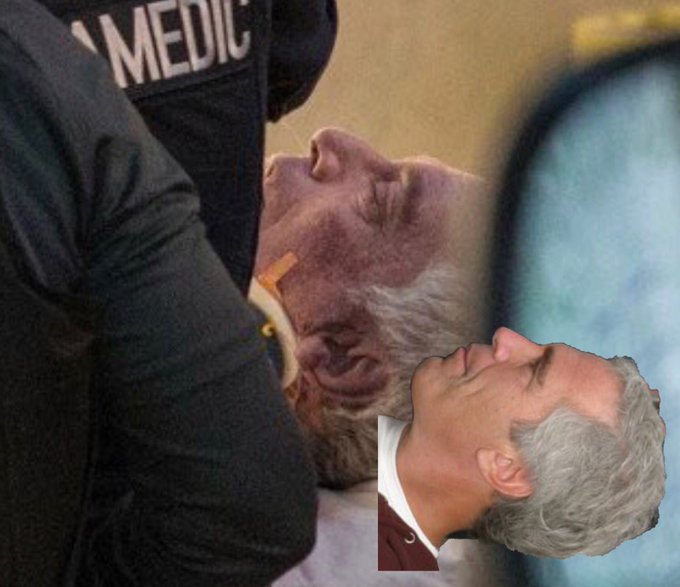 If this is a CNN shot then Im pretty sure they faked his death.

"Here's a pic that shows him not doing well while being wheeled into the hospital..."

Wow big red flag here if you ask me.

IDEA: Epstein was no fool. I bet he has documents and files hidden to protect him all these years. These files need to be found or better yet he might have given someone these files to expose at the time of his death. Maybe to a newspaper? NYT maybe?

If files are not released then someone else was killed and files taken and then Epstein was killed. Killing Epstein could be a mistake.

To walk around as an "untouchable" all these years he had to have proof .... proof that others are involved and are as deep into his perverted way of life.

I believe today...latest Monday someone at some newspaper will make headlines on Epstein and some new files being released...photographs, taped recordings and other files.

Whoever (police officers) who were watching the camera in his cell are in serious trouble.

Not sure if this is just movies/tv, but don't they generally cover people when they are dead?

If not, it seems like someone "snuck" this photo so we could all see he was dead so as if to quiet everyone up.

I bet this won't happen. The official line will most likely be it is not necessary now that he is dead. The investigation is officially over.

I agree next his 2 favorite "madams" will sadly die in tragic accidents or also commit suicide, thereby making the investigation completely over and done.

That is the way the world works when the aristocracy, the uber rich, the political class could be damaged. Damage control will happen. Bet we won't see anything but some little byline when the ladies hit the dirt.

originally posted by: Iamonlyhuman
a reply to: Shamrock6

You know, it could be him disappearing. This stinks to high heaven!

Not sure I'm buying this!

Heres a TMZ link with a picture of him lying on a gurney
www.tmz.com...

People are pointing out the medics having sunglasses on their heads when it's early a.m. hours.

originally posted by: Subrosabelow
a reply to: Shamrock6
I bet ya that body was just someone who looked like JE, and the real deal was smuggled out of the country. Possibly back to his Mossad buddies?

The timing is just too suspect and there were a lot of people in Washington and Hollywood that stood to lose everything if he talked.


I find uploading images to ATS to be far too difficult, but this tweet shows a pic of Epstein following his supposed “suicide”.
Epstein on stretcher via twitter


The shape of a persons ear is as unique as your fingerprint....so I believe

Interactive news. They will provide us with what we tell them we want to see.

Not that anyone is going to believe anything they say anyway, but it will draw in the views.

Note the differences in the ears.