posted on Jul, 21 2019 @ 05:30 PM
link
China has been going through a burst of naval expansion not seen since the navies of the 2nd World War. Her navy has two carriers now, the Liaoning which just sailed past Guam and the "Shandong," an improved Kuznetsov class. She has a third carrier being built outside of Shanghai. She has added Burke sized destroyers and new Type 055 destroyers larger than the Ticonderoga class which nearly as many VLS cells. Even with the vast expansion, comments have often been Taiwan, etc. have little to fear because the Chinese lack a real Gator Navy.

That's no longer true. The Chinese have already 7 Type 071 LPDs that look quite similar to our San Antonio class (save the stupidity of the THEY COPIED US). Now, the Chinese are bum rushing their LHD builds. The Type 075 is similar to the Wasp or America class. 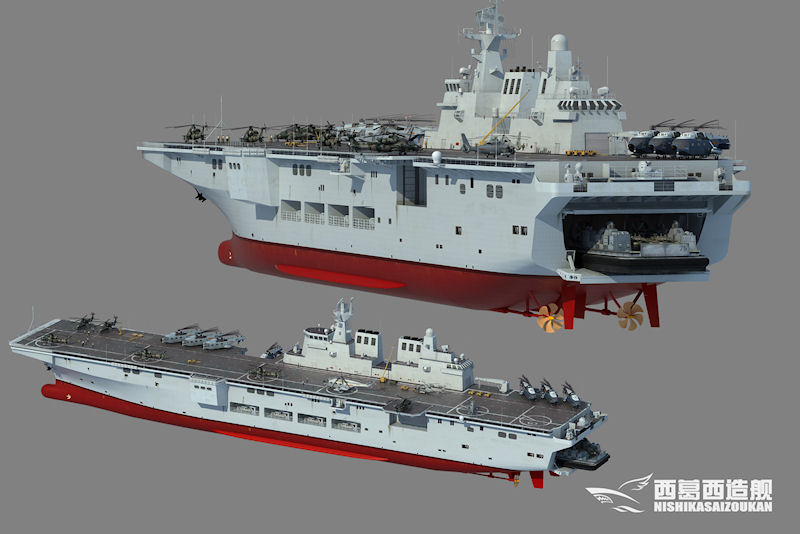 The Chinese have two seen in docks being built. One of which is expected to be launched by year's end. There are also modules for a third waiting for the dock to be cleared with that launch: 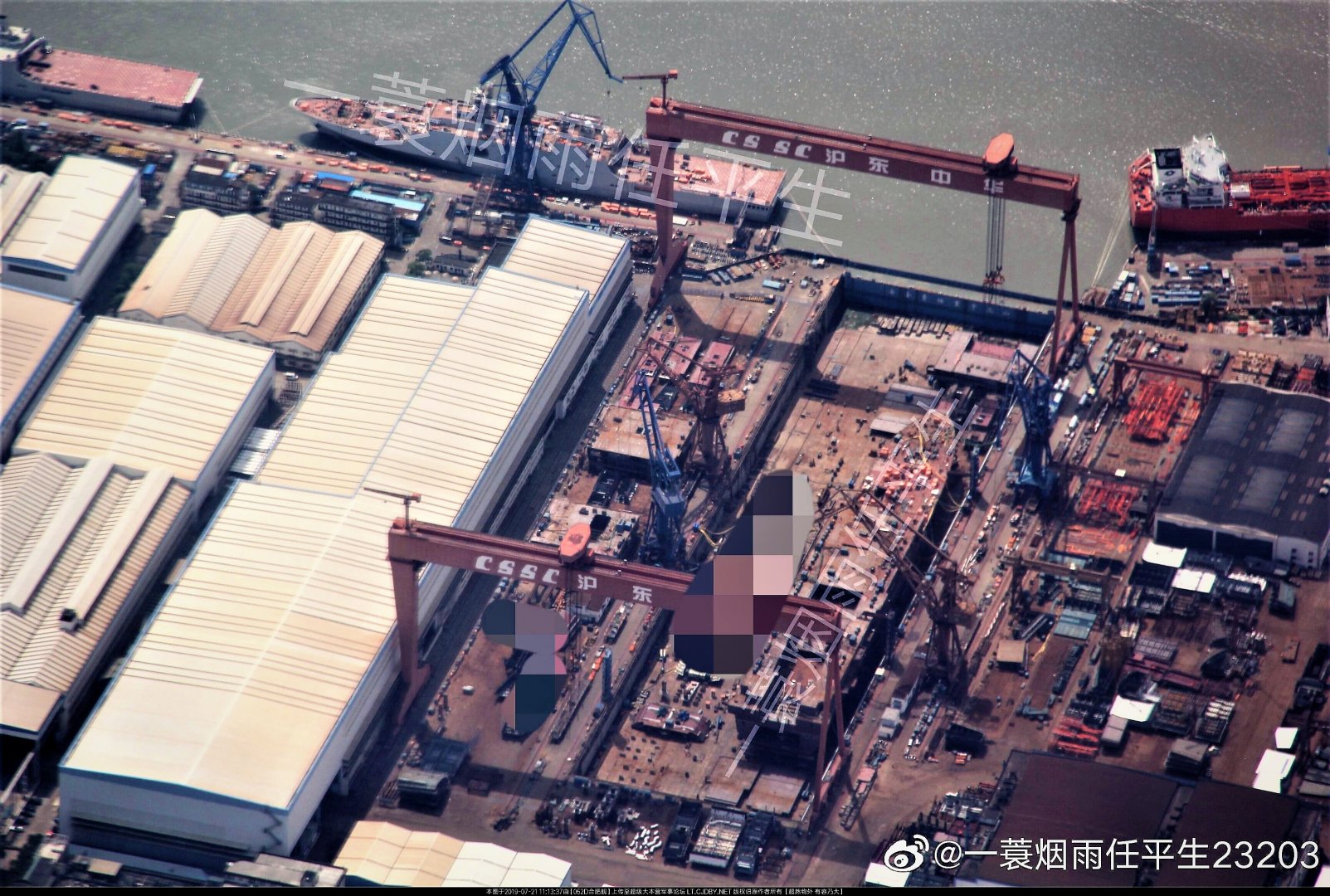 It has also been recently confirmed the class will, in fact, have a well deck: 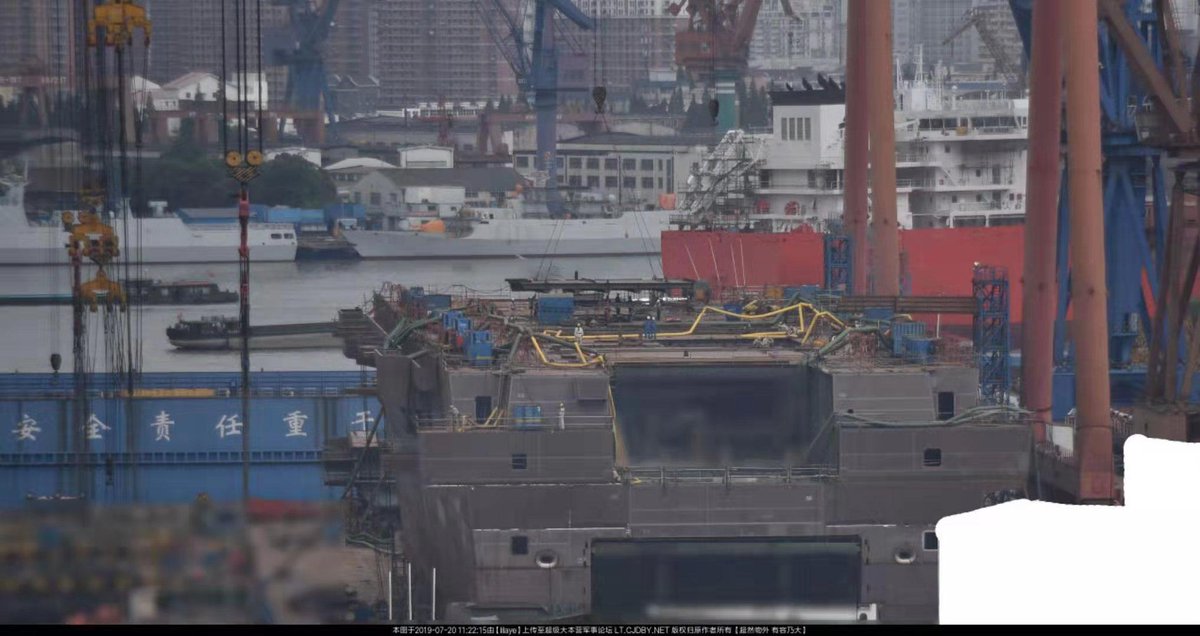 There are rumors the LHDs will parallel the US LHDs in their ability to be used as Sea Control Ships and/or Light Carriers. That remains to be seen. It should also be said, it will take some time before the Chinese have a gator navy sufficient to invade Taiwan, that time is growing shorter. Also just because you have the ships, doesn't mean you have the skills to use them right off the bat. Real life is not an RTS game. It should also be noted, the gator fleet is great for going off and getting into mischief besides Taiwan. In fact, I'd bet on a few interventions as a way for the Chinese to get experience before doing their big grab on Taiwan.

At any rate, clearly, the Chinese are wildly serious about getting a real gator fleet.

posted on Jul, 21 2019 @ 06:24 PM
link
Well, at least this gives the US military back it's excuse to exist. Which it kinda lost after the collapse of communism in Russia. They sorta realized that was not a good thing because a country with a big military needs enemies in order to justify it's defense budget.

I think the OP means an amphibious navy. One that can transport and land troops. Plain English sometimes helps.

Well, I agree with the assessment that China will be looking for somewhere to test all this new kit they are building. They have a number of conflicting territorial claims, but my guess it will in and around the South China Sea - the entirety of which is claimed by the peace-loving Chinese. Maybe they'll forceably expel a community of fishermen from an island off the coast of the Philippines or Vietnam.

posted on Jul, 22 2019 @ 05:26 AM
link
The Chinese have the ability, the money, and the smarts/technology to build and do just about anything for their long term plans. What are the Chinese Long term plans could be an interesting question and answer. To some people the Chinese Communist plans are actually fairly obvious.

The Chinese are all over Africa and S.E. Asia with money, loans, and projects that many governments will find they can not pay for after all is said and done. China says, " OK this is ours now until the debt is retired". They have the same mode of buying politicians (in some cases) to get a favorite deal as that road map is well known and used. youtu.be...


The Chinese Submarine fleet which used to be so noisy they were a joke except to some third world country's Navy has improved greatly and their production has been ramped up considerably. youtu.be...

Gator Navy is slang for the amphibious operations arm of the Navy. The ships that carry an MEU and support the Marines.


Well Rumors are great, but they don't make up for the fact That China has 0 experience in operating this type of vessel. They also don't have a viable VSTOL platform to use this as a sea control platform. Additionally, they don't have the hardware or experience with what our USMC calls the "connectors" to get the Chicom marines ashore. Even if they build these ships in large quantities, they are at least 20 years from using them effectively.

These are not rumors. The ships are under construction now. As soon as I have a photo confirmation, I will post the latest update.

The Chinese have LCACs already. They have 7 LPDs already and can practice that part. Even helicopter ops. They do not have a VSTOL fighter and probably won't for a while. Given the distance between Taiwan and the mainland, the primary need is to move troops, not air support.

It needs to be said over and over: China is operating on a different clock than the US' procurement and learning curve. We used to learn as fast as they are or the island campaign would have never have happened in WW2. We don't anymore. We could, but we don't.


There are rumors the LHDs will parallel the US LHDs in their ability to be used as Sea Control Ships and/or Light Carriers.

Hey Anzha, this is the rumor I was posting about. I am not debating if they are building these ships- I agree, they are. Naval warfare is going to evolve quicker than it ever has over the next 10 years. It's not just the fact that China has no experience with these platforms, but also that they will need to contend with new US Navy weapons systems. Unmanned vessels, hypersonic missles, railguns, lasers, networked weapons systems and stealth aircraft. They are not going to be able to catch up in 10 years. The learning curve is too steep.

originally posted by: Phage
But do they have LCACs? Because them are scary monsters!


They do- Type 722 II, is a medium LCAC, but again, its learning how to use them, and you need to land more than tanks- you need additional connectors. You also need to figure out how to effectively play with all your new toys. Doctrine and war planning are paramount to an effective amphibious warfare strategy. The Chinese have no experience in operating with these systems.


The Chinese have no experience in operating with these systems.


Practice makes perfect. But militaries don't always get it right.

In the 60s the marines attempted maneuvers on the west coast of Molokai. In the winter. When there was a 20' swell running. It did not turn out well. LSTs didn't do well.

LCACs show up here during RIMPAC. And I insist they are scary. Given the choice, I would run away.

LOL, as someone that has ridden one ashore, well, I'd rather fly.

Don't forget the truth that quantity is its own quality. They might not be able to catch up, if we get our head out of our ass, but if they can build 10 or 12 ships for the cost of one of our hypersonic programs, they won't have to catch up. China has no problems throwing people at problems, including losing ships if they have to, if it means meeting their goals.

Cheap but plenty. Not really easy to contradict.
edit on 8/18/2019 by Phage because: (no reason given)


Agreed- but that's why the unmanned programs are so important. It could be a potential equalizer for the numbers game. These vessels will be less expensive. And there's that learning curve again- having an aircraft carrier does not mean you can effectively project power- look at the problems the Russians had with the Kuznetsov in Syria. I'm not talking about the having to tow it there- I'm talking about operating the aircraft. China has the money to train more hours-an advantage over the Russians, but they still have no current experience. It will take time to become proficient, and the US has been operating carriers and LHD's for far longer. That's a lot of experience to overcome.

What do you think of the "littoral Navy?" Is it a valid extension?

China is learning faster than people think though. They're already operating Liaoning around Japan, and all over the South China Sea. They're not going to have a doctrine down tomorrow, but they're moving a lot faster than people give them credit for. They don't need a doctrine that allows them to operate halfway around the world, just one that allows them to push their neighbors around.


Well, I think it will take a little bit for the Navy to figure out how to use it's littoral combat ships. It'll probably boil down to a mix of LCS's, frigates and unmanned. I do think the LCS's will eventually prove their worth in the Middle East. If they were operational they would make for good tanker escorts in the Middle East, as well as being effective against pirates in the Horne of Africa. In the literal littoral sense, we are still mostly talking about the Middle East. The South China Sea is 230 feet deep. By the time you get to the Luzon Strait, which connects the South China Sea with the Pacific Ocean, you have a depth of about 8,500 feet. So, you have the draft to operate larger vessels. The commonality here is the narrowness and abundance of missiles. This is a perfect operating in environment for the large unmanned vessels the Navy has begun to procure. Maybe a future mission module on a Freedom or Independence class ship could control a task force of unmanned ships, as supported by a Lightening Carrier configured America Class or CVN, depending on the mission.

My (former) brother in law was a Navy man and he introduced me to the game Harpoon, which I spent way too many hours on. I cooked up a couple of scenarios based on a mad Russian commander. Silly, I know, but fun.

I currently spend a bit of time wondering about the relevancy of carrier task forces, as cool as they are, in this world as opposed to the 90s.