posted on Jul, 4 2019 @ 11:01 PM
link
I watching a video on Netflix on called "Alien Contact Outer Space". And in the video they were talking about strange radio signals emanating from Earth. They talked about the Russian UVB-76 radio transmission. I did some googling and it's pretty amazing stuff.

So the thing about this clip is some people think: "Another theory, described in a BBC article, states that the tower emits a “Dead Hand” signal that triggers a nuclear retaliatory response if Russia were hit by a nuclear attack.[4]"

People have triangulated the signal and it is coming from a location 8 kilometers outside Moscow. So I was thinking HOLY COW! What if the signal ever broke down for reasons other than a nuclear attack!!!

I then found this clip which is really scary:

So I thought about this idea of a "Dead Hand" signal and things started clicking in my head and I remembered a scene from one of my favorite movies:

"The doomsday machine is designed trigger itself automatically."

"It requires only the will to do so."

"What's the point if you keep it a secret. Why didn't you tell the World ay!!"

Maybe UVB-76 is telling the World something.

I guess given your American education reading anything at all must be a project for you. Sorry I put you under too much strain.

Obviously, you do not listen to the signal or look at the Wiki page. I'm not making the conjecture about it being a "dead hand" mechanism.

And I thought this was a really cool thread. Oh well. Just goes to show you. Would you have preferred something with men dancing in tu-tu's ?

I thought those were signals intended to keep all the radars in sync and to let each other know they still alive, like the other radio signal constantly playing some weird noise and then wakes up and you can hear some guy doing the same thing., every now and then.

It has been on forever and it was not a doomsday machine, it's the radars checking for nuclear missiles constantly telling each other 'we're still here'

Oh edited to add: Sorry i missed the second video, that's the one i was talking about
edit on 4-7-2019 by Malisa because: (no reason given)

Those are the ones making the noise

The Reds aren't as secretive as they think they are, most of us are aware of them, and they are still active. When it comes to the Kremlin or the Pentagon taught us anything it's we don't know what they are up to or what they are capable of.

posted on Jul, 5 2019 @ 01:18 AM
link
I remember a pub (The stone house inn) in North Yorkshire back in the 80s that was based next to Menwith hill radar station (Google echelon and Menwith Hill).

The pub had this weird loud speaker inside that gave out the same sound all the time.

The landlord and locals always said that if ever that sound changed then it was time to get your most expensive last orders in!

We in Europe aren’t bothered... drink is drink...

The sound doesn’t bother most of those who experienced the cold war era. 😉

posted on Jul, 5 2019 @ 02:59 AM
link
If it's something as critical as a doomsday triggering watchdog signal some sort of redundancy would be essential. The way the signal fails could be due to a loss of power supply and a few minutes delay while backup generator started or manually switched over to a backup signal generator. Could even have been a shutdown for routine maintenance.

Does it said where they will detonate?
Second

Don't worry, if this a buzzer has been taken seriously by the different intelligence agencies over the world there will always be a crew monitoring this signal 24/7 and the years around. They will know what machine is used, where is precisely is, what security is installed and how to take it out or keep it going.

The other day I learned of a real incident which almost did set the world on fire if it wasn't for a clear thinking individual.
There was a system installed to watch the skies for incoming ballistic missiles. At a cetain moment it registered a sky full of missiles and one of them would hit New York soon. Because of the serious nature of the situation there was little time left searching for hardware errors. Then close to the moment of payback one man remembered that the russian president was in new york. On basis of this fact the big red button was not pushed.. Later they discovered that the installation could not distinguish a full moon from a sky filled with enemy missilles... true story.

PS You do not want to know about all those other near dead situations..from all countries with nuclear bombs.

The Buzzer/UVB-76 isn't a "Dead Hand" but simply one of the command and control networks of the Russian Armed forces.

UVB-76 the Buzzer according to Russian ex servicemen


There isn't just the Buzzer/UVB-76 but other stations that cover the various Russian Military Districts. The Buzzer/UVB-76 just serves the Western District. These are just hang overs from the Soviet era and were integrated into the Russian Federation. They are simple and tried and tested using both voice and Morse Code.

Stations like UVB-76 are simply command and control networks of the Russian forces. Very simple and effective. They maintain their position on the HF band by a distinctive and unique carrier. They only break the carrier when a message is required to be sent. This means that nobody else can transmit on the frequency and also maintains an effective signal for those required to listen to it. They know that once the carrier goes off the air that there is likely to be a codeword transmission.

The recent UVB-76 codeword is the giveaway to its command and control function within the Moscow Defence Region.

The same message format and all the previous ones are repeated by the Russian military Morse Code networks. It provides Russia and previously the Soviet Union with an effective command and control structure. The use of the HF band and Morse means that the communications are still effective in an Electro Magnetic Pulse environment.

As stated before the Buzzer is just one of several Russian military command and control high frequency networks that cover the various military districts.

This one is called "The Pip" and covers the North Caucasus Military District.

The Pip sending one of the command and control messages to the rest of the military district.

Here is another one called "The Squeaky Wheel". Radio amateurs have through direction finding found it to be from the Rostov region.

Command and control message from the Squeaky Wheel

Just like the Buzzer these stations are just command and control HF networks that maintain their frequencies through a unique and distinct channel marker. The various units monitor these frequencies and react when the channel marker goes off and the command message is transmitted. It is a simple and effect method. The Russians are loathed to give up on such tried and tested methods established in the Soviet era as they work. Many of the command and control networks are in Morse Code and they also send the strategic flash messages in the same format.

The Russians have also established new stations in recent years such as the "Air Horn". Here it is intercepted in a communications test.

The key to these various Russian military command and control networks is the messages that they send. The strategic flash messages use a standard format. 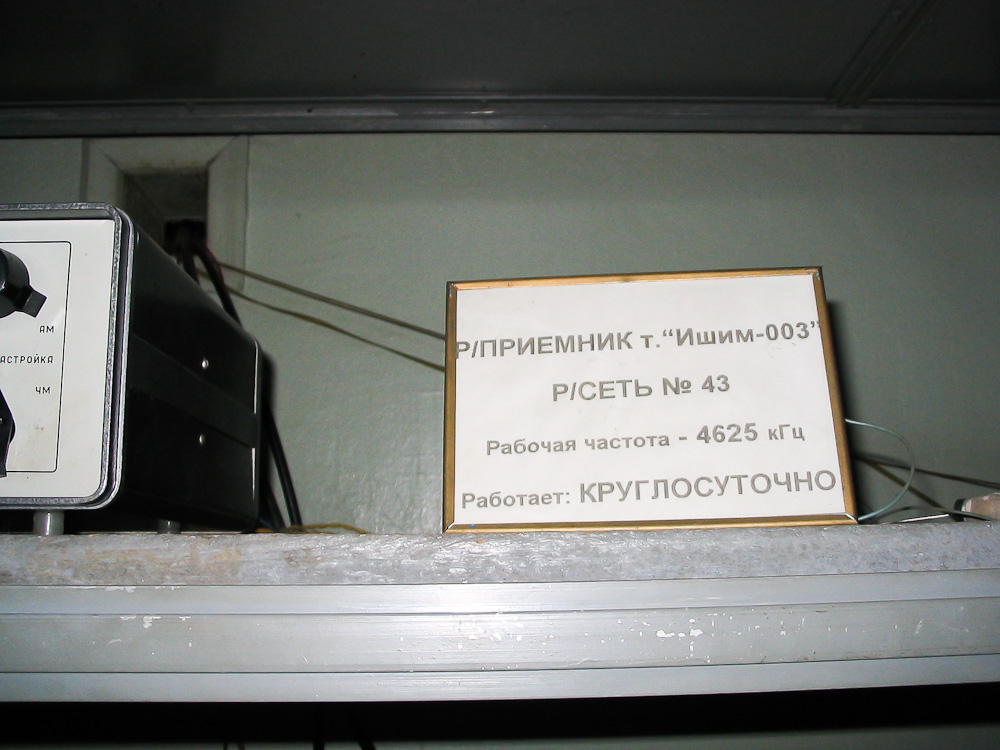 You can see the receiver set up on the left with the switch AM. This image was taken in a military centre within the Moscow Military District. The network is listed as "network 43".

The Buzzer even made an appearance on Russia Today back in 2011. At 01:20 you can here the explanation of the military broadcast. It also includes a visit to the old hosting building before the comms centre moved to a new location.