With regards to your bull# graphic we cant control how our countrymen acted in the past. The EU is the 4th Reich Germany failed in 2 world wars but wants control of Europe by stealth. I don't want some ahole in Europe deciding EVERY aspect of my life.

Look at what this snake from the EU says.

They don't want the 3/4 largest contributor to the EU funds leaving as the smaller countries have said they wont make up the difference.

I think the graphic says a lot about the mentality or some Brexit supporters.

As to the EU being the 4th Reich, well that's actually rather true in some respects.

But because millions of Men Woman and Children died on both sides, in both world wars, so that in the end we would unite in a union to last a 1000 years.

Through economic similarity, stability, and peace rather than being conquered by one superpower or the other.

originally posted by: crayzeed
a reply to: Whodathunkdatcheese
I just posted in another post on this issue. Think on this. If there wasn't any border control between NI and SI do you honestly think that any European nation wanting to import goods into the UK are going to transport their good all the way to Southern Ireland, transport them up country to Northern Ireland just to escape import duty?
The cost of duty to import directly into the UK would far beat the cost of transport by ship and lorry in Southern Ireland.

This argument and many arguments like this is what makes me feel like the Irish Border issue is all just fluff. Both the UK and Southern Ireland want the border to remain as is, so why not just leave it alone? it isn't a problem so why fix something that isn't broken?

Here is what the people who hail from the place think on the matter if you have a spare 10 mins.

As you can see there are numerous issues, aspects and point of contention to consider where and kind of hard border/hard Brexit is concerned.

originally posted by: andy06shake
Here is what the people who hail from the place think on the matter if you have a spare 10 mins.

I know two people in NI and both think the border with the Republic of Ireland is blown way out of proportion. Only fear-mongers (they say) think there will be a return to the type of border that existed during the Troubles, when a very small number of people were killing and terrorising people.

What no one is talking about is the threat to the arrangements over Common Travel Area which may be binned by the loss of the Republic's control of their own foreign policy and borders, as these both seem to have been passed to Brussels.

EDIT TO ADD - The oft quoted risk of the rise in terrorism post Brexit is also over stated. The world has moved on.
edit on 15/4/2019 by paraphi because: (no reason given)

Former senior Police who know the area seem to disagree.

And, as they say themselves, they can only go on the history of the area in question.

Plenty of other points of contention to consider where any hard Irish border is concerned.

Either way, nobody wants to see a return to the troubles over bloody Brexit, it would be madness incarnate and nonsensical in the extreme.

But they seem to have a Bee in there bonnet about something, it would be stupid not to listen.

Must be true, you watched it on YouTube. I was merely stating my own conversations with people who live in Northern Ireland, as I go there regularly.

If you look you'll find lots of people and "reports" with archive footage of a world when the British Army policed the border with the Republic to counter Irish terrorism. There will not be a return to that type of scenario. Borders don't need three metre fences topped with barbed wire and watch towers, if the relations are good between neighbours.

So long as the Republic of Ireland and the EU don't cause a situation to require border checkpoints over and above customs, most people think it'll be business as usual.

Don't know about must, but these people are indeed attempting to convey their feelings.

We don't know what's going to happen, that's the point, an neither do the people that live there, which is there point, and a valid one at that.

The people blowing up crap are not most people, quite frankly they never were. But as to terrorism, the IRA/UDA and the ilk presented far more of a threat than ISIS or they muppets ever have.

Nobody wishes to see their type of come around again.

And keep paying Mr Farage his EU wages, when he becomes an MEP again, he's been quiet for a while but now the elections are due he suddenly appears again, I will change my own opinion of him if he does not run to be an MEP

In light of the Brexit farce and the utter dereliction of duty displayed by our MP's and the parties they represent I would urge all voters not to vote for any of the three major political parties in the UK in the EU elections or any elections held in the foreseeable future.

Vote Green, Vote Independent....Vote anyone rather than those self-serving, self-aggrandising scum.

Difficult one this. My MP is an active and supportive constituency MP who has a high profile within the constituency. Support for him probably crosses party boundaries, as it should do if he is working for his constituents. I have no problems voting for him.

The problem with MPs is when they become victims of their own belief, and get tied up in high politics. Brexit is a good example of the groupthink dangers and utter out-of-touchedness of some of their actions.

I firmly believe our electoral and parliamentary processes are not longer fit for purpose.
The major political parties are far more concerned with maintaining the status quo than they are representing the wishes and best interests of those they are elected to represent.

A mass boycott of the major parties could be the first step in starting the move towards the radical reform we both need and deserve.

During my morning drive this morning, my British wife was talking to me about something but I explained to her that I can no longer take her demands as they have to be approved by the European Union. She is of course subject to their leadership so until and after she received written consent from her overlords, will I do the dishes.

...I hope she doesn't Brexit out of our marriage


Oh that's ok, If she tries that, I'll just prolong the deal 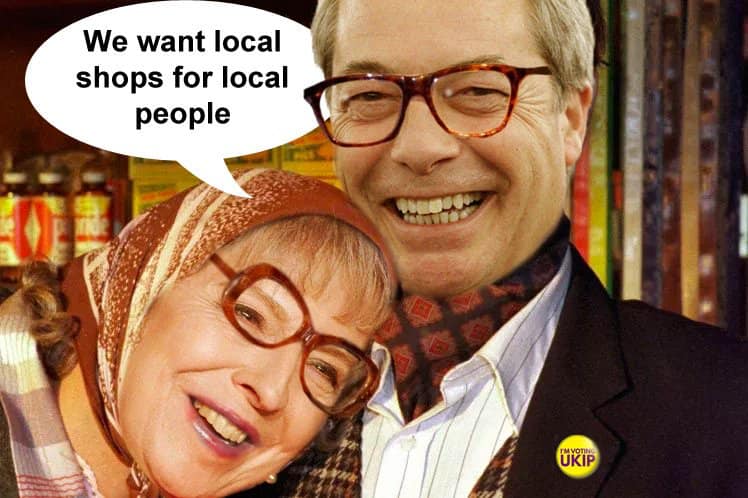 I have heard of brew huts on building sites thick with talk of screwing the main parties over and all lads voting for mr farage.
I commented to a commercial site owner not three days ago and he wants to screw over the embedded parties and have
nigel shaft them all silly. he also replied that he cared not what happens if mr farage's party takes control of parliament as it has already been compromised and the façade of democracy exposed.
I really couldn't disagree wit him.

this will be interesting.


It's pretty common in this day and age for an MP to ignore the will of their constituents. My county voted 55.3% to Remain, our Tory MP (who has had a negative impact on the local economy by introducing parking charges and managed to annoy the Refuse Collectors enough that they're on strike until June) is ignoring us and carrying on her pro-Brexit agenda, so I feel your pain. She's an idiot, she didn't realise the negative impact one of the ammendments she voted for would have on her parents farm until she returned home, as soon as she did she made a political U-turn...

originally posted by: 83Liberty
And now YouGov's second poll has got the The Brexit party in first place...
yougov.co.uk...


Wow they shot straight up! I'm not generally a believer in polls as a whole but this is a huge indicator. Very interesting times in UK Politics!