Mired in dust on the afternoon of June 10, 2018, NASA’s Opportunity rover received a final command from Earth. Take a photo of the sun, the Deep Space Network sang in code. Send telemetry.

The rover’s cameras could barely see through all the swirling dust, which had been blown aloft by a planet-spanning storm. The sky was darkening, and Opportunity’s batteries, powered by sunlight, were draining. The reply was grim. The last transmitted image showed solar radiation was one fortieth its pre-storm level. Power was low: just 22 watt-hours, down from a normal 300 watt-hours on the solar panels. That’s enough to run a typical food processor for about five minutes.

Minders on Earth prepared to let Opportunity hunker down for the dust storm, the worst such event ever witnessed in the more than four decades robots have been occupying Mars. On June 10 the rover woke up briefly, but its energy was too low to send a message home, and it fell silent. In the following weeks Opportunity would grow cold. Everyone hoped that once the winds died down and the Martian skies cleared, the solar panels could charge enough to rouse the rover and prompt it to call home.

This is an excellent article about Opportunity, Spirit and the people surrounding them. It is from Scientific American and is of course well written.

Some of the threads on the Mars data have been very interesting and the mysteries still not solved to many's satisfaction.

Fifteen years, that is just amazing. I loved this part of the story.

Abigail Fraeman was 15, obsessed with astronomy and Star Trek, and was at the Jet Propulsion Laboratory that night after winning a contest sponsored by the Planetary Society.

“It was awesome. When it sent back pictures from Eagle Crater, it was totally different from any pictures of Mars we had seen. There were these smooth, dark sands that were just totally alien,” she says. “The scientists started saying, ‘Oh my gosh, there’s bedrock, I see cross-bedding,’ and they were so excited. I was like, ‘wait a minute, you can do this as a job? You can see that, and look at those pictures and understand the significance of what it means?’”

Today Fraeman is the rover’s deputy project scientist, and until June she spent her days working with engineers and scientists to design the rover’s activities.

posted on Feb, 2 2019 @ 06:09 AM
link
I always wondered why they didn't include a system for cleaning the solar panels off (thinking something like a gentle brush/windshield wiper). Yes, it would have been extra mass to carry, but worth it in the long run to keep the little rovers going.

But then again, when they only planned for it to last for 90 days, it may have been considered a non-issue at the time.

posted on Feb, 2 2019 @ 08:40 AM
link
The strange thing no one seems to be talking about is the fact that a dust storm covered the entire planet and is the worst ever seen. In fact, it seems it was so bad the possibility of such wasn’t included in the design of the rover, thus its failure. Do they know why there was a storm of such magnitude? Doesn’t that seem important to understand as we constantly hear things on Earth about climate change? There’s no possibility of a connection, of any solar output changes possibly causing all this, etc...?

Every article about this rover just glosses over this huge, incredibly important event and talks about the poor little rover. Who cares about the rover? We can send more. I’m far more interested in the giant planet-wide storm. But maybe if they try to draw any parallels between Earth and Mars weather then it no longer supports a certain political narrative?

There have been plenty of dust storms on Mars, and large ones including planet wide are quite common, not rare.

In 1971, when Mariner 9 arrived, the entire surface of Mars was covered by a global dust storm. The Viking landers also experience dust storms.

Back in 2007, both Spirit and Opportunity had to contend with a planet wide dust storm, and in fact both had to shut down. When the storm was over, their power recharging ability was reduced due to the amount of dust on their solar panels.

Here's a link about the climate of Mars:


That's not been my experience. Electronics will break right away under warranty, or not at all. People buy cheap stuff because the market demands it and then complain when cheap stuff breaks. Just one example out of many: I used to buy cheap coffee grinders. They cost $15 or so and lasted about two years max. They grind the beans through centrifugal force, then you upend them to get the coffee out. They're made of cheap plastic with a cheap spinning motor for the blades, and they basically spin themselves to death. So I bought a Kitchen Aid for about $150. This has heavy duty metal grinders and a very powerful motor. It's lasted a decade so far, and, in fact, it's an heirloom. I'll be able to pass it on to my kids, if not my grandkids.

Buy cheap stuff. Watch it break. Complain. You get what you pay for.


Pay several billion for an iPhone and I am sure it'll last longer than just the first time you drop it.

Your $50 android tablet or $250 Xbox is in no way equal to a Robot that was flown to Mars.
Just sayin'

posted on Feb, 2 2019 @ 10:12 PM
link
It's original service life was supposed to be considerably shorter than this, if memory serves.

It's a testament to the engineers and scientists who build this robot.

posted on Feb, 3 2019 @ 11:06 AM
link
Here is another good one from The Planetary Society. It focuses more on the currently ongoing, final effort to make contact with the good little rover Oppy.


But at month’s end, the Mars Exploration Rovers (MER) team and colleagues at the Deep Space Network (DSN) neither saw nor heard any sign of the legendary robot. At the Jet Propulsion Laboratory (JPL), where all of NASA’s Red Planet explorers have been born, Opportunity’s 15th anniversary came and went quietly in the halls of MER.

After spending seven and a half months reaching out to and listening for the longest-lived robot on Mars and transmitting more than 600 recovery commands, the silence is deafening for the team. Still, no one is giving up, not yet.

“We’re still trying,” said MER Principal Investigator Steve Squyres, of Cornell University. “We’re still in the window when we’ve seen cleaning events in the past and we are continuing to attempt to communicate with the rover in every way we can.”

With NASA’s support, the MER team is committed to doing everything possible to make contact with the record-setting, crater-hopping, marathon-roving veteran explorer loved around the world. To that end, within hours of the Opportunity’s 15th anniversary, the operations engineers began launching a series of last-ditch efforts. 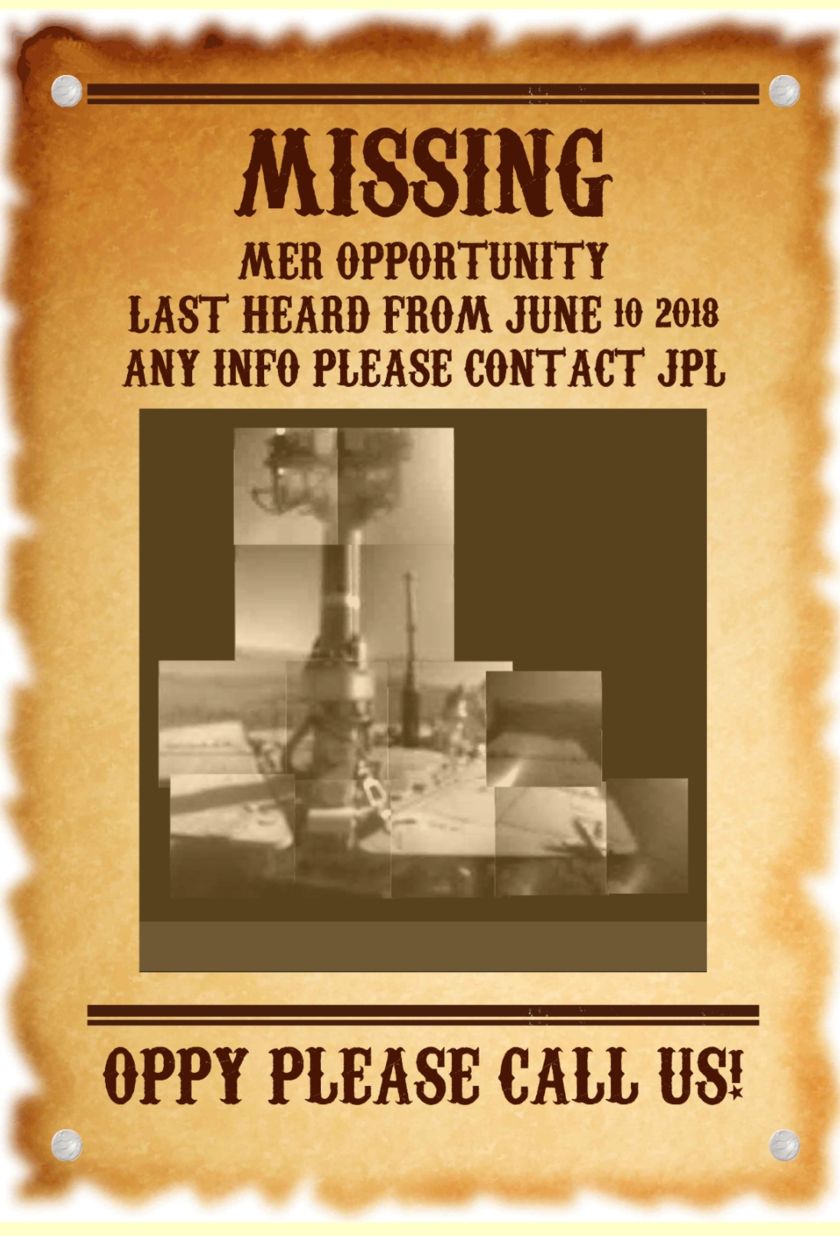 posted on Feb, 3 2019 @ 11:51 AM
link
They sent 600 sweep and beep commands. That is the equivalent of a deep 6. They should have just admitted they did not want a response. It would respond at 900. Instead they now sent just a beep command. Perhaps they will be smarter with their numerology this time.