posted on Jan, 14 2019 @ 11:14 PM
link
I have lurked for a long while, joined recently. I have read,viewed countless mind bending threads on the "others" we share this World/dimension with. It has been glorious. Long time members and great researches have vanished, lack of interest, No, frustration yes " I assume". We live in a time we're human technology is king. We live in a world in which all is explainable, to those who know nothing. Are we really ready to vanquish belief in extraterrestrials due to modern tech..I hope not. The US military as expected, has made significant advancements in god knows what. The TR3B, Drones everywhere and some things we will never know, And now Behold the silencing of disclosure. They are here, they are everywhere, hell we may even be them. Yet every time it's brought into perspective we have nay Sayers who claim, Chinese lanterns, Parachute teams, The Perspective ratio of pixels on your film are so bad I beat my wife with a wiffle ball bat... Please with all due respect..shut up. I've spent so much time looking to the skies that my fiance left me twice according to her, and I only knew of the first time. The Skies are a very busy these days, Border Patrol drones are extremely active in my neck of the woods. The chaos that is our modern night skies simply cannot replace the truth. The truth is what ATS has always known and built on, THEY ARE HERE, they are real, and we may just want to pay attention to what they're intentions really are. I sincerely hope that i garner input,personal affects,videos and predictions on the UFO phenomenon from the great minds here. The activity in the skies is increasing, and it's not "all military" why now and what do they want?

Those who have been hesitant or just didn't want to bother, share your Ideas.videos of ET.
It's OK, we all know they're real...Unload


In the age of technology, how do we differentiate human from alien. it might matter.
edit on 14-1-2019 by Sabrechucker because: (no reason given)

posted on Jan, 15 2019 @ 12:11 AM
link
UFOs are real. There are plenty of things we see in the sky that are unidentified. However, making a correlation between something unidentified and something of extraterrestrial origin is a mistake.

I think it would be the absolute greatest discovery in history to find incontrovertible evidence of visitation by alien beings. I'm sure we (humans and all other life) on earth are not the only critters inhabiting a planet. The odds are astronomically in favor of it.

"Modern technology" is spot on when it comes to this stuff, because virtually everyone these days carries with them at all times a very high-quality digital camera. Camera technology has reached the point that allows virtual amateurs to capture images and video that barely 20 years ago were the provenance of professionals and industry types with very expensive gear. Those days are gone.

And yet we have no really good, really sharp, really convincing photograph or video that can withstand qualified scrutiny.

There's an awful lot of wish-thinking (and shenanigans) that drive people to create hoaxes, and that pollutes the process of honest investigation.

There are too many social media pipes for Tha Gubmint to put the kibosh on an actual event.

If it happens, we will know before any media outlets get their greasy mitts on the story.

It's okay if you believe in it and realize one day that you wanted to believe in it, it's a fun topic. As humans, we want to believe that there's something much bigger than us like God or Gods, angels, spirits. Aliens loosely fall into this category although they're more believable than the others from a scientific perspective so they're the preferred choice of the educated man.

Paranormal material about ghosts, hauntings, demonic activity, spirits etc has been hugely popular for thousands of years. It sells billions of dollars of material, but the alien stuff really took over in the modern age.

Who wants to believe that we're the only planet that can grow and maintain intelligent life for light years all around, possibly in the entire universe. That there's no God, afterlife, spirits, souls. Pretty depressing and boring.


I think it would be the absolute greatest discovery in history to find incontrovertible evidence of visitation by alien beings.

We already have that!

People will believe anything the masters tell them.

Many very old art pieces depict one or two people in flying machines.

The excuse is "That is how they depicted the Sun and the Moon."

The truth is right out in the open. Open thine eyes friend. See anew. 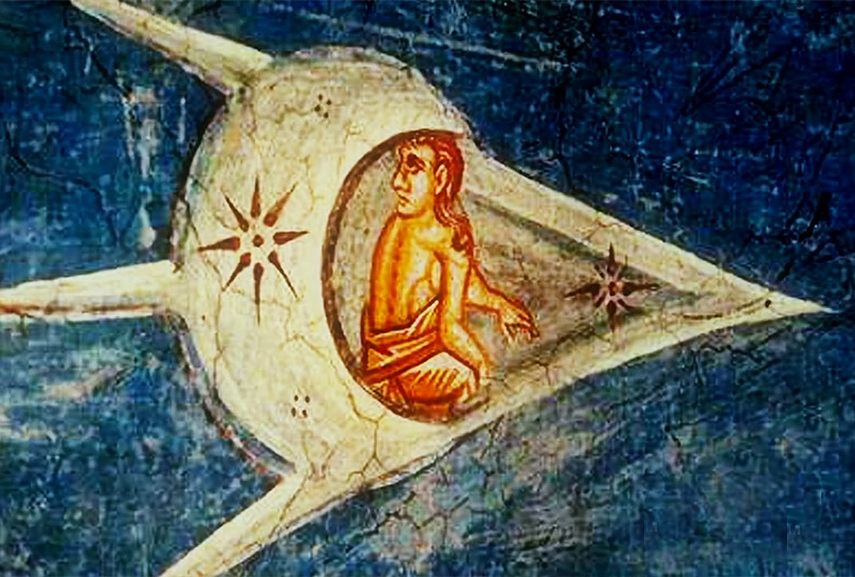 I'm fairly certain the people inhabiting earlier civilizations had imaginations, and they developed fantastic visualizations of their interpretations of things they didn't understand. Biblical stories cannot serve as evidence; for example, did Ezekiel describe seeing a comet? Was it a sun dog or a solar eclipse? Similarly, an illustration from a Jules Verne book is not, by itself, evidence of a representation of reality. It cannot be authenticated.

I'm not that easily convinced.

posted on Jan, 15 2019 @ 03:01 AM
link
it's ok to come to terms with the fact that they are not here, and maybe, they never were.
Ufology has become a sort of religion, has been that way for a long time, actually.
while i don't deny the possibility that we have been visited, at some random points in time, the idea that they are actively interested in our planet or lurking in every corner of our sky, or walking around earth hiding in plain sight is the stuff of fantasies.
While of course it would be stupid to flat out refuse the possibility of life outside of our pale blue dot, we have to come to terms with the fact that they are too far away to have any type of meaningful contact with us, or, even more depressing, they just don't care.

posted on Jan, 15 2019 @ 03:13 AM
link
As humans we sometimes like to believe we know everything about something when there’s a possibility we don’t, until something happens or someone comes along to show us how wrong we are. reply to: r0xor

posted on Jan, 15 2019 @ 04:18 AM
link
Back in the olden days you see many tribes and cultures depicting aliens etc. It seems it was easy to fly around back then and pass on knowledge and make themselves known. What did humans have back then to defend themselves? Sticks and spears I guess

Technology I beilve has made it harder for other worldly beings as they can be caught on cameras and radar and sonar etc.. plus we have missles and heavey arms.

So I think technology has made it harder for them to get around and tend to gear most reports in urban areas.

Hate to rain on your parade, but that is how the Sun and the Moon were represented in early Christian paintings:

Open your own eyes, friend.

I've spent so much time looking to the skies that my fiance left me twice according to her, and I only knew of the first time.

Girls prefer their fellas to look for the stars in their eyes . . . .

Here is one of my favorite pictures from old Egypt.

It is said by the experts that this is just Akhenaten, Nefertiti and their children. 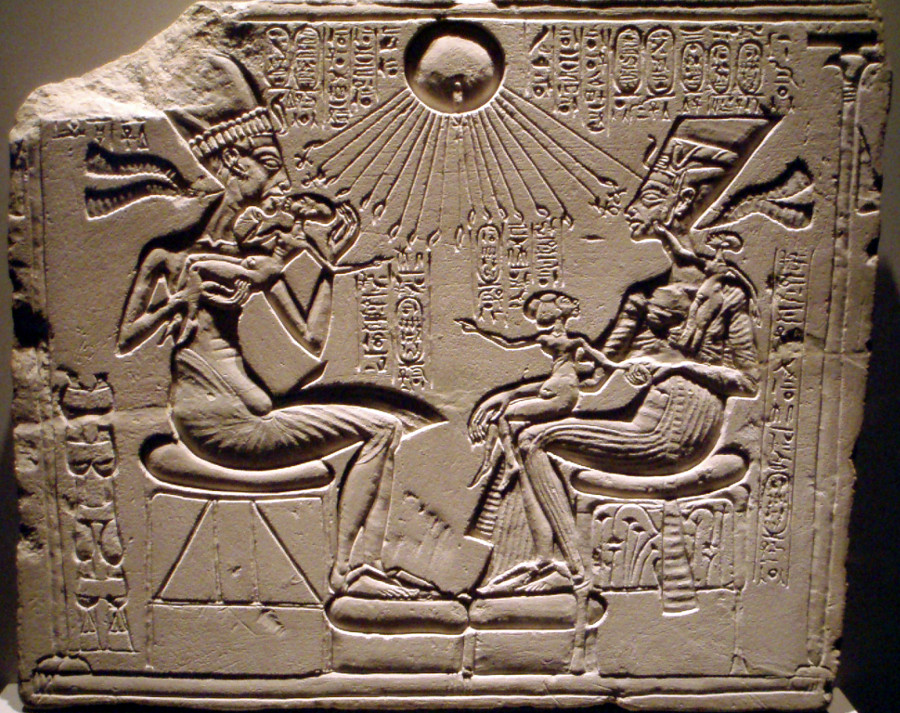 Hi resolution copy of above image at wikimedia.

But I don't believe that story for a moment. Check out the heads on the little folks.

My own opinion is that the little ones depicted are the little grey alien guys.

I've met a few greys in my time and the small yellow aetheric(?) one I see most of the time places great importance on a kiss. Taste for the one that visits is more than a gesture, taste is knowing for her.

Nonsense. There are no grey aliens. My nordic alien contact told me so.


Nonsense. There are no grey aliens. My nordic alien contact told me so.

Huh! and Nordic boobs aren't nearly as big as I was lead to believe . . .

The stark reality is that ET does in fact exist and has been visiting the Earth for Aeons. The truly funny part of all this is how people convince themselves that they either do or do not exist. Folks will take perfectly good data and throw it away because they either don't want it to be so, or they simply don't understand.

SO, many of y'all probably already know what 'm about to throw out, but, perhaps this time you will actually take a real look at the data and come to a better understanding.

In 1961 or so Betty Hill was abducted by Extraterrestrials, it came to be understood that these aliens were from Zeta Reticuli, but honestly, there is little evidence to "lock in" that origin...there are other places they may have been from.

Some time ago I began the project of analyzing Betty's "star map" an artifact that most discount, typically for illogical / non-scientific reasons, and, I'm sorry man, that simply doesn't work...at all.

Betty's map consisted of 25 points she claimed were stars of ET's "trade and exploration" routes...later Marjory Fish gave us an interpretation of that map...that is where the origin of Zeta Reticuli came from.

In my project I used several programming languages (Python, C#, SQL) to extract star positions for all Hipparcos stars within 33 parsec and convert them into 3D positions so that I could build a 3D model of those stars. I then used Betty's map as a "template" and Ms. Fish's interpretation as a starting point. From this I determined that Betty's map was a 99.1% match to Ms. Fish's interpretation when those stars were viewed from HIP-26737 (a "G" class star 122ly from Earth). That is a very close match...

Using mathematics and probability I found that doing what Betty did is nearly impossible, the probability of drawing 25 random points that actually match real world stars is on the order of: 5.84795e-87

You can view my analysis here a PDF is also available at that site.

And, on the travel faster than light part (so as to cross that vast void) Terrestrial science and engineering has already solved that issue, though not on a practical / usable level as yet. But, to their very great success...a "warp drive" only needs a Fusion Reactor (of course we now need a Fusion Reactor that works)...

Such a narrow view of the possibilities of our universe. Let us put that view into perspective. But I need to paraphrase a statement by the famous novelist Arthur C. Clarke:

The data is there to warrant the belief in the existence of ETs here and now, but that realizations is caused to be ignored by the greatest fault in the human mind, pure cognitive dissonance, and, frequently, a strong measure of insolence and studied ignorance.

originally posted by: Sundog1
The data is there to warrant the belief in the existence of ETs here and now, but that realizations is caused to be ignored by the greatest fault in the human mind, pure cognitive dissonance, and, frequently, a strong measure of insolence and studied ignorance.


Depends on what you'll accept as a level of proof. When I comes to determining the actual existence of something, I personally like that level to be very high, and not just something indicative. I suppose you could call it ignorance, since we don't know the answer. But it's not stupidity. In my opinion, the data has yet to connect dot "A" (picture of a flying saucer) with "B" an actual (and not hypothetical) alien. Show me any photo or video or ground trace or whatever, and tell me the specific answers to these simple questions:

I have never heard that theory before, Very interesting!