BREAKING: Michael Flynn had 19 interviews with the special counsel's office, per the office, which says criminal investigation is ongoing in heavily redacted filing. 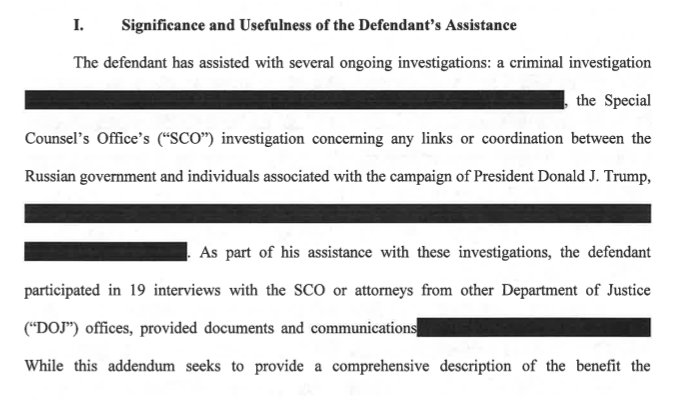 I am going to guess this is not over with yet. When the IG report comes out, depending on the findings by the IG, its entirely possible for Flynn to challenge his investigation / conviction.

originally posted by: Xcathdra
Flynn faces no jail time for his "substantial assistance" to Mueller.

Really, I got nuffin.

No need to spin it. If Mueller recommended no jail time that tells me that Flynn provided useful information to the investigation. That means bad news for Trump.

originally posted by: Xcathdra
Flynn faces no jail time for his "substantial assistance" to Mueller.

Yeah.. Part of me wonders if Flynn is now just going for any conviction he can get to somehow justify the witch hunt. Even the NYT ran an article telling the left to drop the expectation of collusion being found by the SC.

The other possibility was Mueller intentionally dragged it out in order to keep this mess in the news thru the midterm elections.
edit on 4-12-2018 by Xcathdra because: (no reason given)

ugg, reading that is like silly wrote it. No facts, just supposition of what Flynn must have told Mueller about how Trump was tugging Putin's peepee. I wonder if the report comes out, and Trump didn't do anything, will the MSM report that, or will they do more sh!t like this?

posted on Dec, 4 2018 @ 08:01 PM
link
Essentially what that all means from today (because the juicy stuff is all redacted) is that Flynn told everything, and had an accurate and informative story. There must have been a good amount of info too for them Mueller/DOJ to hold 19 meetings with Flynn. I figured that everything important would be redacted. I know CNN and media has been salivating all day saying that big news was coming..for the most part thats just a hopeful ratings ploy. The odds of the redacted parts being released today were low. Its actually much worse sign for Trump that they are redacted.

You do know Flynn's charge / indictment was for something that was not illegal or Trump related right? Dont forget the 302's were changed so Mueller could have a starting point to go after Trump. The failure to register under FARA was for actions taken while Obama was still President.

"After the fbi agents initially said they did not think flynn would be charged, and we made him fold under threat of substantial penalties both legally and financially, flynn pled guilty to lying to the FBI about a perfectly legal phone call with kislyak as part of his duties as part of an incoming administration.

Like the judge in the Manafort case already said, we have no interest in actually pursuing crimes against people like Flynn, and merely used him as a tool to get more info to try to take down trump. To save himself, he gave us many interviews and materials, thus allowing us to get more access to trump, just like the FBI made up excuses to send spies in his campaign and even wiretap people connected to it to get as much info as possible.

While we dont have any evidence of russian collusion at all to show yet, we still welcome getting any and all info on trump, even if that means going after people for crimes that have nothing to do with Russian collusion or the 2016 election. We will continue to charge trump connected people with the very crimes we let hillary people off for, in hopes of taking down trump.

However, as everyone knew all along, Flynn did nothing that is uncommon in washington, and as such he will not be given jail time. Please stay tuned as we desperately raid lawyers, prosecute people for process crimes, and due whatever else is within our reach to get trump by any means necessary.

And rest assured we will work tirelessly to make sure that when we charge Trump people with crimes we will make sure to allow hillary people to get away with those same crimes, like lying to congress, lying to the FBI, failing to register as foreign lobbyists, etc.

All the infiltrators and implants 😎

Maybe they all go down soon.
⚔

Mueller's office says Flynn's "record of military and public service distinguish him from every other person who has been charged as part the SCO’s investigation" - a fact that speaks both to his character and suggests he should have known better.

originally posted by: JinMI
a reply to: BlackJackal

But this is just Democrats spinning stuff, right?

Why is the link to "first hand" knowledge source broken....?

Not saying you are mistaken or BS'ing, just trying to track down the info.

originally posted by: BlackJackal
But this is just Democrats spinning stuff, right?

Actually yes. The FBI agents who interviewed Flynn stated he did not intentionally lie to them. When he contacted Russia it was during the transition period so his conversation / contact were not illegal.


originally posted by: JinMI
a reply to: BlackJackal

But this is just Democrats spinning stuff, right?


I guess we will see.

Was this bombshell that people talked on the phone to people like kislyak like he did? Maybve he will tell us about that RT dinner that Jill stein and some trump people wee at with Russians!

Cause if so, thats nothing at all.

I will start to demand justice when I see trump connected people working with russians to steal the election. You know, the original crime that was alleged.

As is the job of a member on the transition team. You know, to reach out to other nations.

This is getting old and pathetic.

That ship has long sailed.

Collusion is all that matters to the point of simple legal contact.

Also, while completely ignoring the 'other side.'