As Senate Republicans press for a swift vote to confirm Brett Kavanaugh, President Trump’s nominee to the Supreme Court, Senate Democrats are investigating a new allegation of sexual misconduct against Kavanaugh. The claim dates to the 1983-84 academic school year, when Kavanaugh was a freshman at Yale University. The offices of at least four Democratic senators have received information about the allegation, and at least two have begun investigating it. Senior Republican staffers also learned of the allegation last week and, in conversations with The New Yorker, expressed concern about its potential impact on Kavanaugh’s nomination. Soon after, Senate Republicans issued renewed calls to accelerate the timing of a committee vote. The Democratic Senate offices reviewing the allegations believe that they merit further investigation. “This is another serious, credible, and disturbing allegation against Brett Kavanaugh. It should be fully investigated,” Senator Mazie Hirono, of Hawaii, said. An aide in one of the other Senate offices added, “These allegations seem credible, and we’re taking them very seriously. If established, they’re clearly disqualifying.”

The woman at the center of the story, Deborah Ramirez, who is fifty-three, attended Yale with Kavanaugh, where she studied sociology and psychology. Later, she spent years working for an organization that supports victims of domestic violence. The New Yorker contacted Ramirez after learning of her possible involvement in an incident involving Kavanaugh. The allegation was conveyed to Democratic senators by a civil-rights lawyer. For Ramirez, the sudden attention has been unwelcome, and prompted difficult choices. She was at first hesitant to speak publicly, partly because her memories contained gaps because she had been drinking at the time of the alleged incident. In her initial conversations with The New Yorker, she was reluctant to characterize Kavanaugh’s role in the alleged incident with certainty. After six days of carefully assessing her memories and consulting with her attorney, Ramirez said that she felt confident enough of her recollections to say that she remembers Kavanaugh had exposed himself at a drunken dormitory party, thrust his penis in her face, and caused her to touch it without her consent as she pushed him away. Ramirez is now calling for the F.B.I. to investigate Kavanaugh’s role in the incident. “I would think an F.B.I. investigation would be warranted,” she said.

The jist is that she says kavanaigh expoised his penis and made her touch it as a freshman at yale.

It seems extremely convenient that another allegation would come up now, after kavanaugh was supposed to have been voted on.

MRinder
+21 more
posted on Sep, 23 2018 @ 07:17 PM
link
So basically the Democrats are going to keep piling up BULL# until Kavanaugh trips and falls in it. I hope Trump gets out his giant testicles and calls them out on this. Like this guy has just been running around raping women with bad memories.
edit on 23-9-2018 by MRinder because: Spelling

So know we know why they wanted to drag this out.....the democrats had an army of PI's out there trying to dig up dirt. Sad that politics have come to this. Let's look at the claim and see if it is credible. If this indeed happened, shouldnt be hard to get witnesses to make statements corroborating it right? Let's see how this plays out..... 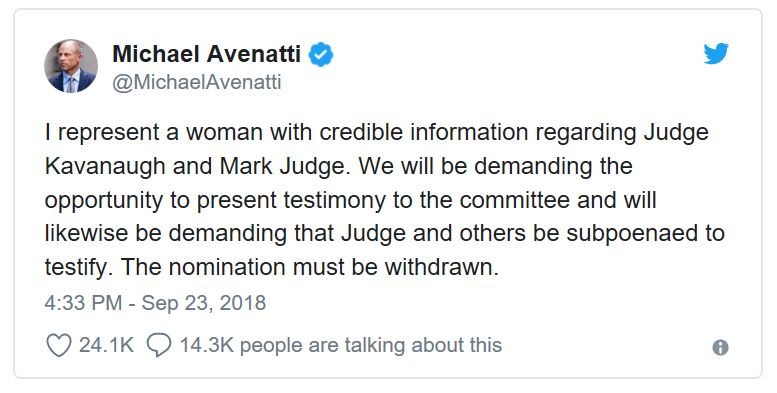 ridgerunner
+13 more
posted on Sep, 23 2018 @ 07:22 PM
link
Another liar,they will keep bringing them out as long as it takes to delay long enough to get Socialists/Democrat/communists in office to stop another conservative on SCOTUS.The Republicans better grow a pair or we will wake up in the USSA one day.

jedi_hamster
+43 more
posted on Sep, 23 2018 @ 07:22 PM
link
so, she was drunk 35 years ago and she wasn't sure and didn't remember, but after six days with attorney she figured it's all clear like a penis near her face. how convenient.

But to sum up, she basically says she was hammered, and groggy on the floor and the handed her a toy penis.

Then someone put a real penis in front of her and the gorup said kiss it, and she shoved it away.

She then remembers someone saying it was kavanaigh, and remembers him pulling up his pants.

A few people say they remember hearing about this, tghough no one said they saw it yet.

Several of the people at the party said its nopt true.

One woman who says she was debbies best friend says that debbie never told her of this, despite this being something they would have talked about.

But again, there is no proof, no eye witnesses yet to come forward, and kavanaugh and several others there deny this happened.

originally posted by: chiefsmom
First of all, a Dorm party. Should be plenty of witness then? Or did he push her in a bedroom with a friend again?

Yes i had people telling me that cory booker grabbing a woman who was drunks breast after she shoved him away was just normal stiff and no need to really worry about.

Lets see if those same people say that here, or if suddenly this is a huge deal.

ausername
+10 more
posted on Sep, 23 2018 @ 07:26 PM
link
Given how they've stalled the confirmation process with an allegation with no corroboration or evidence they could in theory bring in more and keep this going forever.

How did 6 extensive and thorough FBI background investigations miss all of this?

Apparently Kavanaugh was a serial rapist and no one knew.

In other words, like Ford, this is something that could have happened like the guys on my husband's dorm floor who handcuffed a hammered chick to a radiator because she was drunk enough to fall for it, but she only vaguely remembers some stuff and not any particulars.

That makes it convenient to give her just enough credibility while allowing them to fill in those blanks.

posted on Sep, 23 2018 @ 07:30 PM
link
Avenatti says this woman is not the client he was referring to. I'd like to hear this woman testify, but as of now its way too flimsy of a story to amount to much tbh.

originally posted by: jedi_hamster
so, she was drunk 34 years ago and she wasn't sure and didn't remember, but after six days with attorney she figured it's all clear like a penis near her face. how convenient.

the left never ceases to amaze me.

exactly what I was thinking. probably some not so subtle coaching going on there........

originally posted by: chiefsmom
a reply to: Grambler

Yeah iot did that to me as well.

Just go to the newyorker its the top story.

I will try to fix the link.