It was Assange that stated that Russia did NOT hack the DNC server that exposed the corruption and collusion between the DNC, Hillary campaign and the media.


yup. and if he had irrefutable proof, he would have bargained with trump a long time ago and regained his life back by disproving and dispelling all the myths and clearing trumps name and getting pardoned.


of course the above makes no sense to most

Because the DOJ and FBI are not partisan and have no stake in any of this.

what does that even mean ... you circumvent the point to make an argument by proxy. .. a lot of people have stakes in this including trump and Russia, an entire nation and government painted as culprits when they supposedly arent.

Assange has "alleged " proof to put EVERYTHING to rest...
since 2 years ago.

DOJ FBI CIA are partisan, yet neither had ever came close to touching Assange all this time. your point is moot and you can't address why Assange, with undeniable proof of no wrong doing from Russia's side, had stayed mum this whole time.

and lets not talk about "stakes" , because Snowden was in the USA, in the hornet's nest, was brazen enough to disclose what he knew; hes still alive and well. Assange is already on foreign soil and still no "undeniable " proof...

I laugh every day.
Assange has no credibility honey pot. None at all.
If he said it was Saturday I'd ask for photo proof.
So once again hahaha.
If he could exonerate trump by revealing someone else gave him the emails he would.
Or is he too ethical? Scoffs loudly...

originally posted by: Sillyolme
15 seconds to post a reply? Really???

Are you scared that he may have proof that is wasn't the Russians? That would be a major impact on the narrative. The left doesn't want to eat two years worth of crow.

What proof do we have that it was? The word of a third party, Crowdstrike? From what I gather, the FBI has yet to investigate the servers themselves.

You should talk about getting a grip, Silly.

I know you do not converse properly in threads but if you have time do some research. You should maybe spend some time looking at what journalistic work Wikileaks did before they started publishing on the USA and the awards that that got.

Please be very careful before trying to derail one of the only bastions of free press. You may not always like the truth and evidently in this case you did not. But the world is always better off for it.

This new propaganda narrative of Russia, Russia, Russia is standard classic smearing. Now Senate Committee has requested information on the Russian narrative because WL has information on this. If this is followed through on and information is gleaned then you will be able to a conclude correctly and as JA has indicated it has nothing to do with Russia. WL also put out a reward for information about the Seth Rich murder. This was not done for no reason.
I really do not care for all this left / right political crap you keep harping on about. WIse up and see past the charade. I like many just want the truth.

In this case a man may have died so this information may have been released. So instead of adhering to short sighted political views. Try looking past that and hope that JA is questioned,correct information comes out and the course of law is followed.

Let us have the truth and if you dont like it you can just put your head in the sand.


No we dont know Assange cannot show proof of his claims. He has never been officially asked. You are simply making stuff up to fit your own narrative.


DOJ FBI CIA are partisan, yet neither had ever came close to touching Assange all this time. your point is moot and you can't address why Assange, with undeniable proof of no wrong doing from Russia's side, had stayed mum this whole time

He has not stood mum. He has stated this was not done by Russia and he is happy to share the information he has within the correct framework. It looks like this may actually manifest now and now a the caged bird might sing. 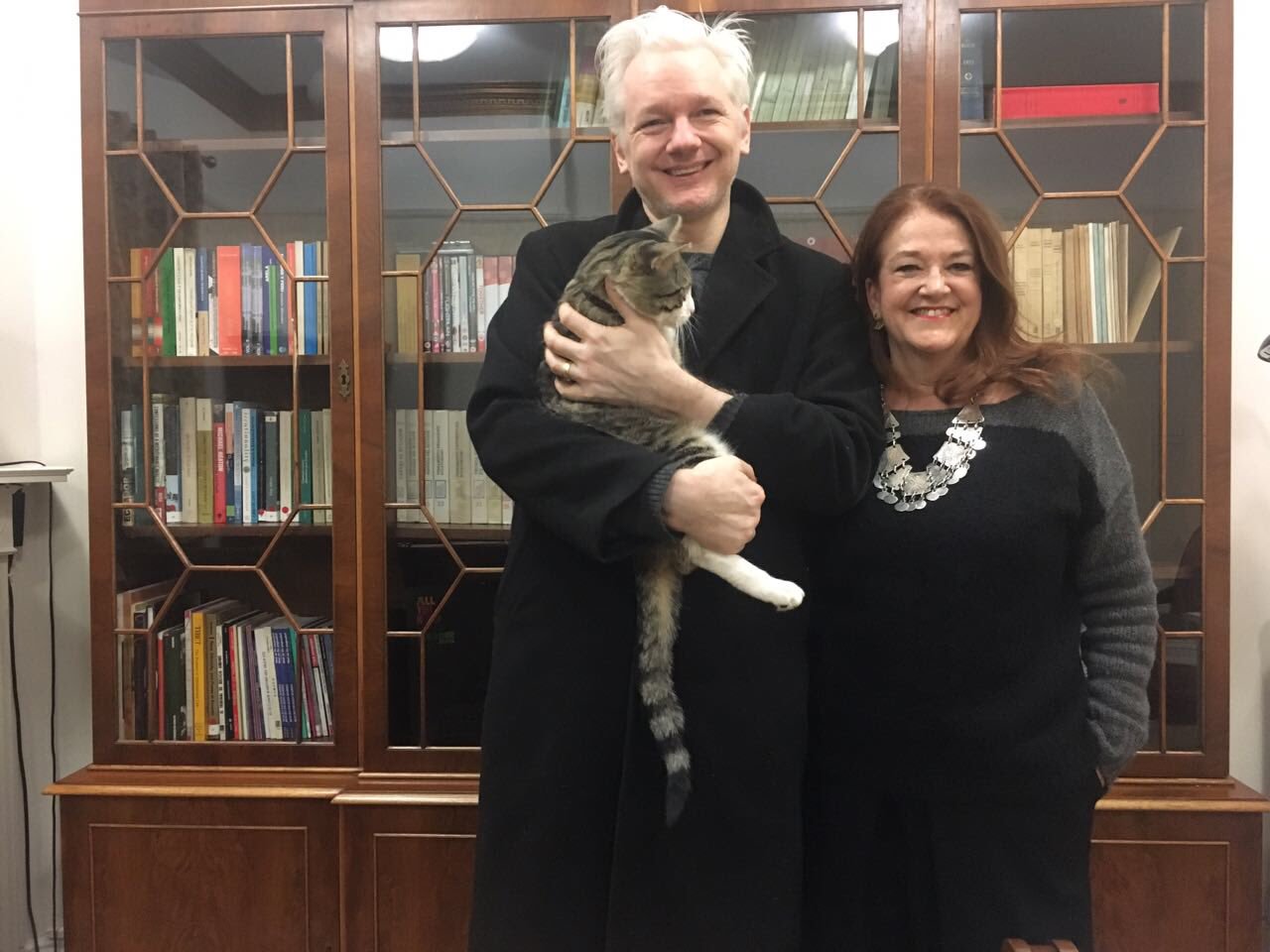 Yes thats one of the last pictures of him. Everything after that a blue screen or radio... and yes you do have to wonder why he has his coat on in the embassy. This all fits in very well with AnonScan and the strange tweets from the US Navy and Julian Assange. It all kicked off over Christmas and then went very quiet.

I think, my darling, his name is more likely Roger Stone.

Stick to the facts. Do not digress the thread off topic. If you want to talk about Seth Rich lets talk or maybe you would be better off talking to the Senate Commitee since you seem to know more than anyone else.

Lets start with the email leake from John Podesta. The one stating to make an example out of the leaker.

> Agree. Happy to talk to the David's. Call me crazy, but I think if we can > survive the next month, it will be possible, maybe even straightforward to > get our arms around this once there is an actual campaign. I'm definitely > for making an example of a suspected leaker whether or not we have any real > basis for it. >


Lets then listen to people that are in the now and hear what they have to say.

Seth was @Wikileaks DNC source.
Seth was killed for that reason.
Seth is one of many Clinton victims.
Seth is a hero for preventing Clinton.

Finally what do WL say about it. Well they never reveal there sources but they did offer a reward for SR killer and say that they had the proof that is was not Russia.

Now the commitee will have a chance to look into the infromation propely for the first time and may justice prevail.

I dont think this is going to happen to be honest. In my opinion he is going to try and strike a deal. Assange will testify only if charges the US may have pending are dropped. I can also see him trying to testify by video conference although I dont think that is going to work either.

I do not like Assange and think he should be prosecuted however if he has information that could result in in the prosecutions of our political elite who think they are above the law (and I mean good info that would bring a large chunk of them down) then I would support a deal.

originally posted by: Christosterone
Democrats may be the least self aware people I’ve ever seen...

But as for Julian, the deep state democrat cronies will be gutted that there’s too much heat to simply kill him in Equador.

originally posted by: Breakthestreak
But as for Julian, the deep state democrat cronies will be gutted that there’s too much heat to simply kill him in Equador.

Assange is in the embassy in London and not Ecuador.

As for the deep state I think it might be more than just the US that would like to see Assange go away.

posted on Aug, 13 2018 @ 04:16 AM
link
A question of practicalities. Does Assange need to testify in-person, or can he do so via a video link? I ask because if it's in-person i.e. he has to go the the USA, then he's got to step out of the Ecuadorean Embassy in London.

He will be arrested on a warrant. The English courts have already refused to overturn the arrest warrant, so that will stick and politicians won't be able to over-rule it.

I'm not scared of anything. Why would I be scared? I'm a member of the audience not in the play.
I don't take this all so personally as I've seen others. So I'm not scared at all. No matter what happens it's not happening to me and this too shall pass. LOL.
I'm sure that he got the emails from Russia anyway.
I don't dwell in fantasy land.

They have communications direct from putin ordering it and they showed that to dear leader in ja n of 2017. Days before his inaugeration. Why does he deny when he was shown the proof?
edit on 8132018 by Sillyolme because: (no reason given)