Terrestrial bacteria that were sent to space and returned changed now pose a threat to the existence of life on Earth, and measures must be taken planetside to contain them, Russian scientists said.

Yes....I smell a set up. Yes......Something is about to happen. This has "Opps it escaped from a laboratory" written all over it.
However, the truth will be a whole lot scarier


A Russian experiment called 'Biorisk' has revealed that various microorganisms from Earth were able to survive in the harsh conditions of space on the surface of the International Space Station (ISS). It was carried out starting in January 2005 at the Russian segment of the ISS and saw 68 different organisms, including bacteria, insects, vertebrate animal and higher plants, used as test subjects. The mutated bacteria showed high aggressiveness and resistance to antibiotics on their return to Earth, the Russian report, prepared for the meeting of the International Committee on Space Research in the US later in July, said.


Eggs of crustaceans and caviar of African toothcarp fish also managed to survive in outer space for 2.5 years, with the embryos revived after returning to Earth, it added. "The living organisms are capable of surviving in outer space. Hypothetically, in distant future, the arrival of alien substances from other planets to Earth may be possible as well as to other planets from Earth," the report said, as cited by RIA-Novosti. "In addition, the danger is posed by terrestrial microorganisms that returned from space after visiting another planet and transforming in an unknown manner in its atmosphere," it added.

This is how it starts 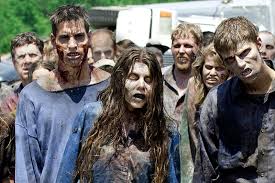 From the moment the invaders returned, breathed our air, and multiplied, we were doomed. We were undone, destroyed, after all of man's weapons and devices had failed to kill us, it was the tiniest creatures that God in his wisdom put upon this earth. By the toll of a billion deaths, man had lost his immunity, his right to survive among this planet's infinite organisms. That right we threw away, after every challenge. For now do men live and die in vain.

There are times when we just have to sit down and admire how many ways to die are out there. You know what I mean? It's that point when we stop TWITCHING and just get on with it.

There are the asteroids and the ELE solar flares that can cripple humanity as soon as tomorrow. We're living through a great extinction and some eco-systems could disappear in the next decade. Global warming and resource shortages are a-waiting in the next 2-3 decades. Then we have all these antibiotic resistant organisms that can potentially kill millions like the flu and plague pandemics. To cap it all off, we're potentially manufacturing 'better mousetraps' off-world and we're the mice.

posted on Jul, 7 2018 @ 02:08 AM
link
finally, some study results after decades of manned spacestation! i've been wondering what they are doing up there all the time apart from grinning and floating through tubes.

posted on Jul, 7 2018 @ 02:12 AM
link
"In addition, the danger is posed by terrestrial microorganisms that returned from space after visiting another planet and transforming in an unknown manner in its atmosphere,"

Eh wtf?
What planet exactly have they been to?

originally posted by: Phage
a reply to: SecretKnowledge
Mars

I hear morgan freeman all over this.. now the old song too

Once something happens the odds are meaningless.

...you've never eaten one of my pot roasts.

Damn him. I can't even find a screw that just dropped on a clean floor, and he wins 3 the lotto times.. Still, swings and roundabouts, the Earth might have just hit the jackpot and I for one welcome our new deranged, aggressive mutant overlords.

They're going to eat you too.


Eh wtf?
What planet exactly have they been to?

Not a planet, but the currently active Hayabusa2 mission will return a sample of the Ryugu asteroid to Earth in December 2020.

posted on Jul, 7 2018 @ 04:27 AM
link
I thought successful mutations were successful because they helped to adapt to an environment. Why would they coincidentally develop a resistance to antibiotics, out of all the things there are on Earth, when they are stuck on the side of a space station not exposed to it?

The thinking here is, that it is possible that bacteria that were on the world at the time of various asteroid collisions, could have made their way to other solid bodies in the Solar System, or be trapped in debris that was blasted free of the Earths surface during such an impact, and mutated there, to survive the harsher conditions. The conditions on ALL the solid bodies other than Earth, are harsher than they are here.

The threat would come from a chunk of another planet, or an asteroid that was once part of this planet, coming into our atmosphere and releasing these aggressive, mutant strains of bacteria, on an unsuspecting Earth. Now... that being said, the bacteria that Russia placed on the surface of the ISS, were taken out of Earths atmosphere in a controlled and protected manner, meaning that they were not exposed to the sort of random, violent and entirely brutal conditions that an asteroid collision with the planet, would cause for any life form caught up in the debris cloud. For example, the heat, the sudden cold shock directly afterward, these bacteria were not exposed to those things.

They were, as far as I know, exposed to hard vacuum in a controlled manner. Now, while it is perfectly possible that such a thing could conceivably happen in the chaos of the aftermath of an asteroid bombardment, it is highly improbable. The heat of the initiating impact would be appallingly intense, the concussion would be hellacious. There are waaaaay more variables at play than whether something can survive, mutate and thrive in just the conditions on the ISS surface. Anything that came from this planet, would also have to have survived forces greater than any atom bomb we have ever detonated, could ever hope to generate.

That being said, it is interesting and concerning nonetheless, that bacteria from our own world could pose an even greater threat having been thrown into the brutal crucible of space and survived it. Given the lethal nature of some bacteria that we encounter, without them having been mutated by the harshness of space or other worlds, dealing with some of the worst nasties that exist now, in their hardened, mutated, post exposure state would be a challenge that I could easily see us being incapable of surviving.