posted on Jun, 22 2018 @ 11:35 PM
link
About an hour ago two (2) F-16's came screaming over the house at low level! I mean SCREAMING too!! The weren't super-sonic, but they were goin' WAY fast at about 300' AGL. These two guys were RIPPIN'!! (damn near super-sonic) because the dogs heard them before I did, then they appeared...and WOW, they thundered overhead! Just SCORCHING fast!

I was out feeding the cows and it scared everyone to death. These two guys were LOW, low, low!!

If they were 300' AGL that would be the highest estimate. They might have been 150' AGL, just hugging the terrain and ROCKET fast! (Even our bull ran into his shed!). It was deafening!

It was like two bullets passing through. The must have been just sub-sonic. There was no sonic boom, but they were going 500-600mph easy!

They were headed back toward Buckley. We get lots of them out here, ANG guys on the weekends, but WOW these guys were LOW and FAST!

(my freaking dogs are still hiding in the bathroom because of that!)

ETA...I "think" they were F-16's, they came buy so fast it was hard to be sure. Maybe they were F-18's from Navy / Marines, I'm not certain. I'm used to seeing the F-16's out of Buckley, but they never fly that low. If these guys would have been any lower they'd have been kicking up dust!
edit on 6/22/2018 by Flyingclaydisk because: (no reason given)

We just had 4 fly over my house.
I think they were F-16's.
College Word Series and Offutt.


I live near a Marine Air Base. The Falcons are allergic. Apparently.

call the base and find out, and if they do it again complain. im all about hot doggin it so

normally im not one to do such things but if they are disturbing your livestock that's not very cool.


where i live there are only blackhawks and thankfully they mostly fly about lunch time.

Unless you are in or under a military operations area MOA they broke a lot of rules both FAA and military. Up to you to call the base ... They would be found and probably get a good ass chewing but I doubt it would go any further unless someone wants to make an example of the two.

Now if they were spraying like back in the 50s and all you livestock became ill and suddenly died then... that would be a totally different situation..

posted on Jun, 23 2018 @ 02:07 AM
link
I miss the Arkansas ANG A-10s making low mock gun runs on the pond on my property sadly they got their hogs taken away to transition to a drone outfit. Loved the gnarly sound of them dropping bellow 100’. Still get some apaches from time to time lots of C-130s, a fair amount of C-17s, but no fast movers show up around these parts. Closest thing is a F-111 that’s on the side of the interstate in front of a metal supply place she looks fast with full sweep on the wings...

Bucley AFB? I figured you lived up in nowhere northern Michigan. Sightings like these are the best.
This A-10 flew over the other day as I was going out back to my deck to enjoy my morning coffee. 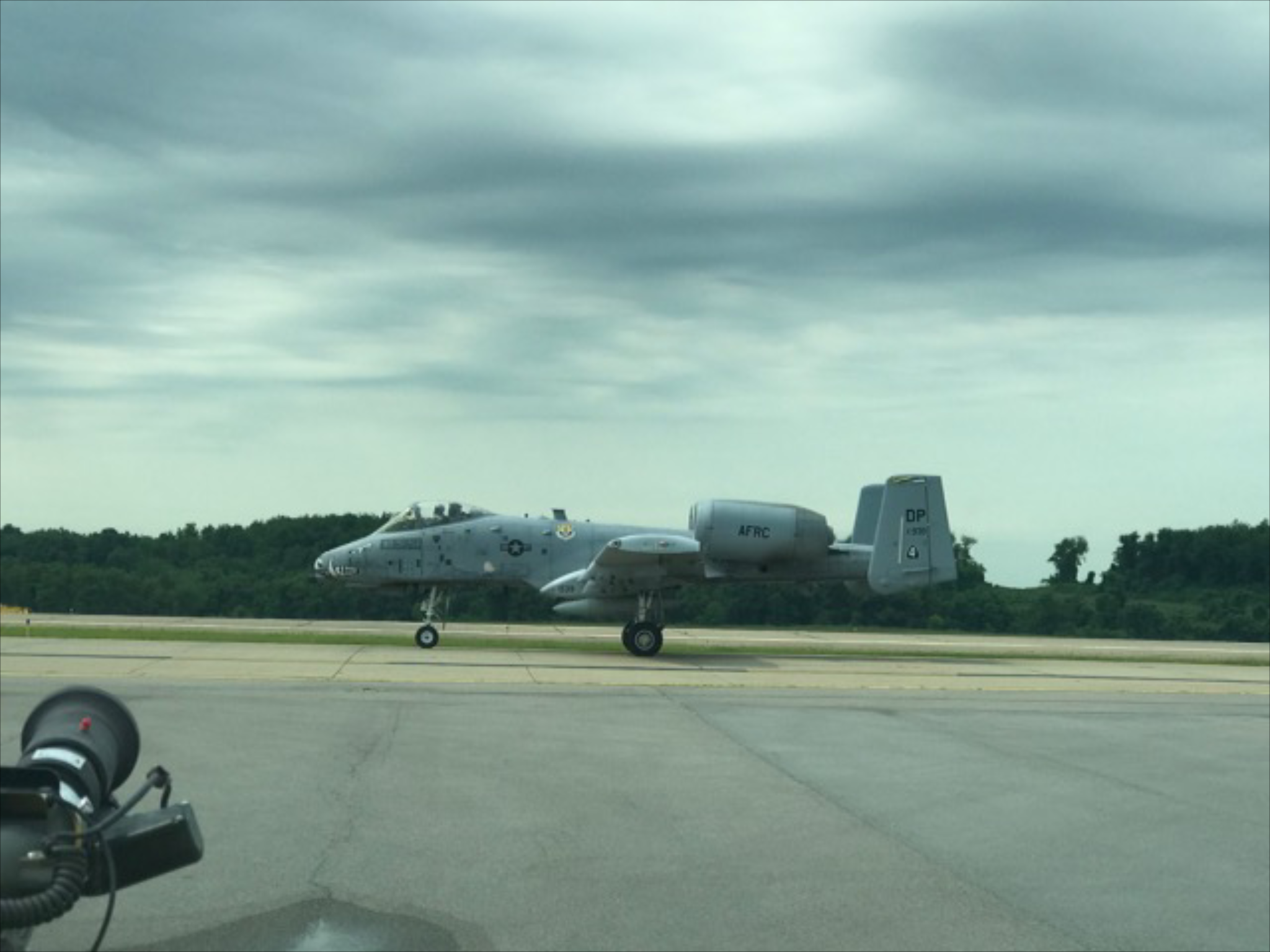 Taken at Pittsburgh international airport Fire company.
I was mad because he was quiet and i didn't have my camera. Luckily my former co-workers sent me this picture minutes later. They were waiting on an alert listening to the ATC Tower talking to the pilot.... casual conversation. 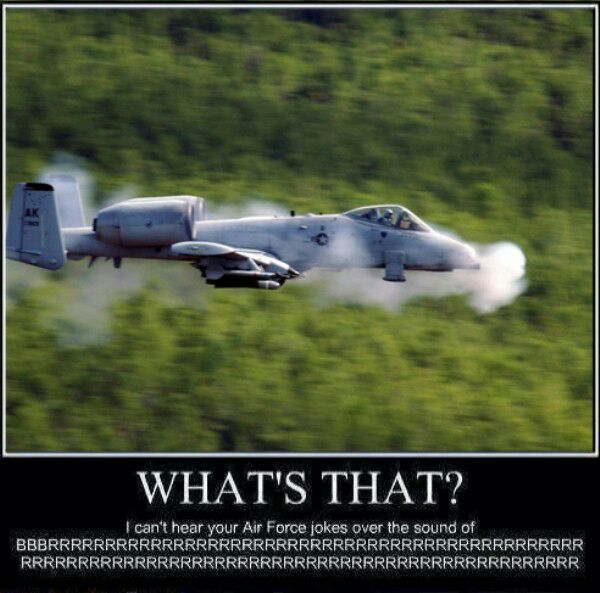 posted on Jun, 23 2018 @ 05:26 AM
link
That must have been a cool sight. Out here I get alot of Apaches. So low they shake stuff of my shelves. But I am half way between an Army base and an international airport.

You’re making me want to drag out my Thrustmaster Warthog official replica HOTAS joystick and fire up DCS World A-10C module and rain 30 mike mike like there’s no tomorrow... thing is built like a tank the setup weighs a good 40 pounds...
mobile.thrustmaster.com...

Just got a good laptop, and this looks like a must buy
Saved to shortcuts.

This guy😁
Not me😆 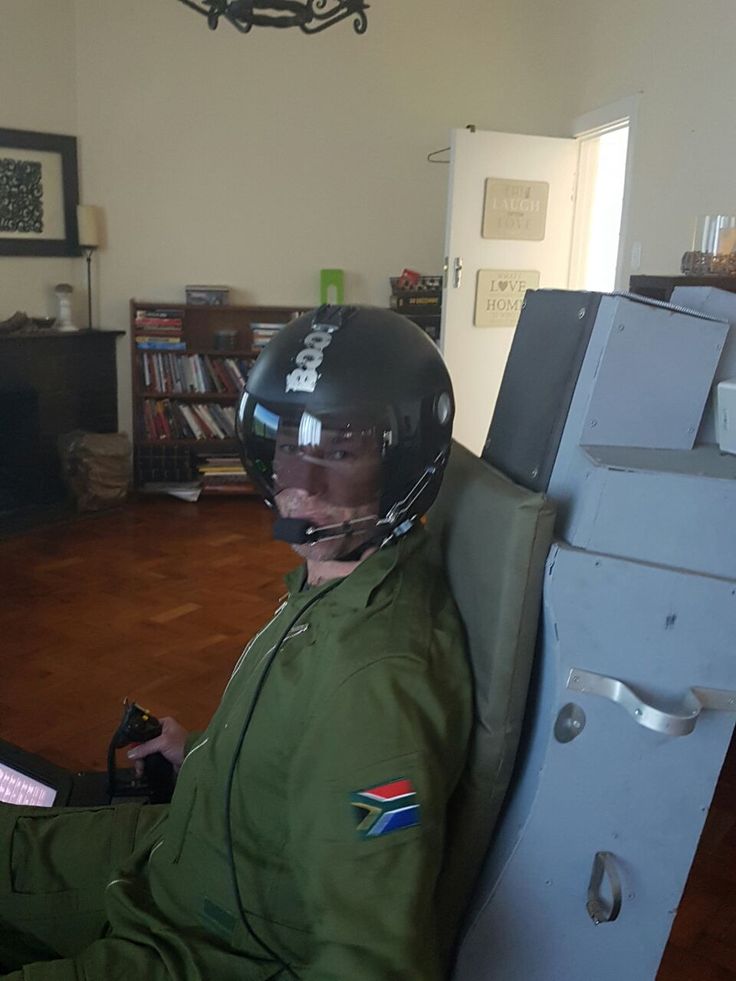 F16 Set up.... thought the Yaw was to the side though? Close as I could get scchhhhhucks. 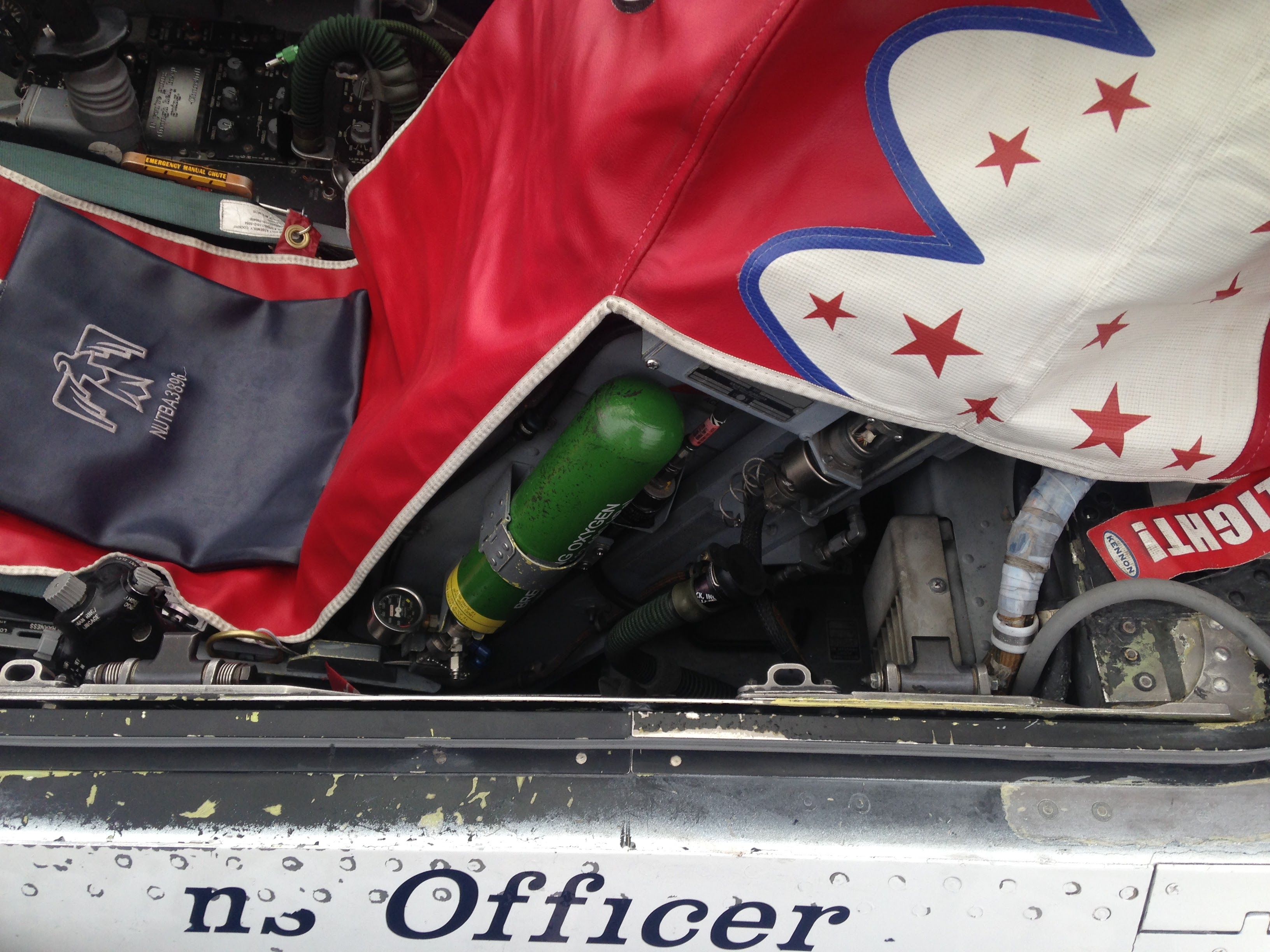 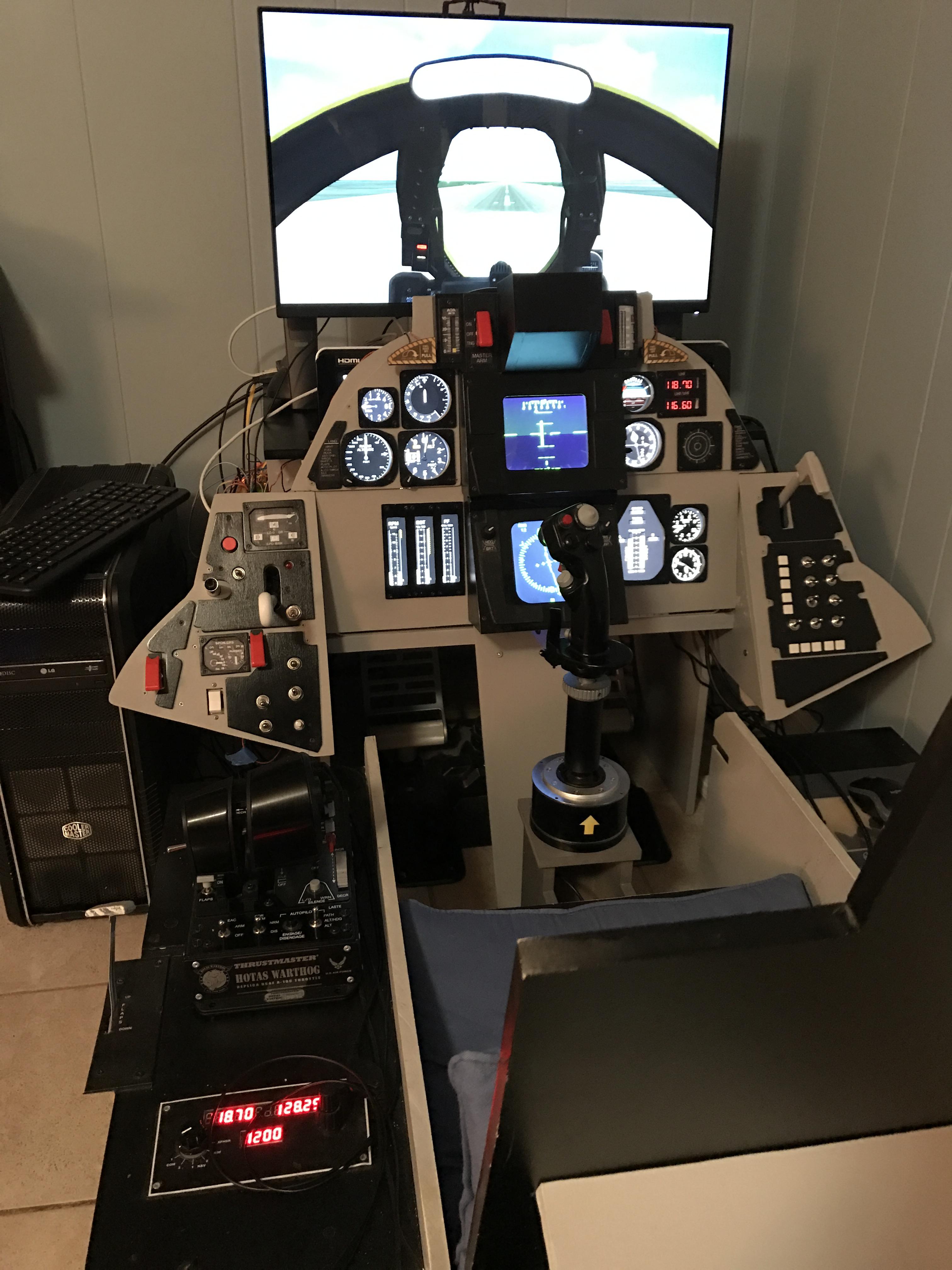 Just got a good laptop, and this looks like a must buy
Saved to shortcuts.

This guy😁
Not me😆

The build quality and feel of everything is awesome there’s almost no plastic and it feels right they did a bang up job on it. Glad I piqued your interest, let me know if you get it and need a wingman lol. I have a friend that build hardcore flight sim setups that are insane I’ve got some pictures of some of the cockpits he built but they are awesome!
It’s worth the premium it’s one that you just need to buy once and not replace crappy plastic sticks regularly, I’m the buy once cry once kinda guy.
You know it’s a good joystick if it’s in that hardcore of a sim cockpit...
edit on 6/23/2018 by BigDave-AR because: (no reason given)
edit on 6/23/2018 by BigDave-AR because: (no reason given)

I edited my previous post for you, and would enjoy this

I think I'll just leave it be. Nobody got hurt, so no harm no foul. Startled the hell out of me though. Doesn't happen all the time, but it has happened before, once or twice. We've had crazier stuff than that happen in the past; two blackhawks and a chinook came through our draw one time and they were actually BELOW the house! I was looking down on them from our front deck.

Anyway, it was pretty awesome to watch. Seeing something moving fast like that so close to the ground really gives a great perspective on how fast they are going. Like two grey steaks just scorching by.

posted on Jun, 23 2018 @ 02:41 PM
link
Happens here a couple of times a year, Memorial Day after flyover at local cemetery and on July 4th, probably flyover of local parade. There's an ANG pilot who has family living in a subdivision about a 1/4 mile south of us, and when he's done with the flyover he buzzes the hell out of their house. Sometimes he has a wingman, sometimes he's solo. Glides in until around 300-or-so feet, then drops the hammer and does a high-g yank 'n' bank. Sometimes he'll make a second pass. Really impressive. He's been getting away with it for several years and I'm surprised his CO hasn't told him to knock it off.

I edited my previous post for you, and would enjoy this

Is that your Tomcat pit?