posted on Jun, 1 2018 @ 01:36 PM
link
So these leaflets are being put into peoples mail boxes in the UK how about that ? IF you found one of these in pushed into your door like a pizza of Chinese food flier how would you feel? Are there laws against this over there? What agenda is being pushed into your home, last time i checked UK wasn't an Islamic Country And what happens if you don't comply ? What then ? A 2ND Visit to your HOUSE?
?

If someone could post the pic on here so yall dont have to click the link..... thank you in advance 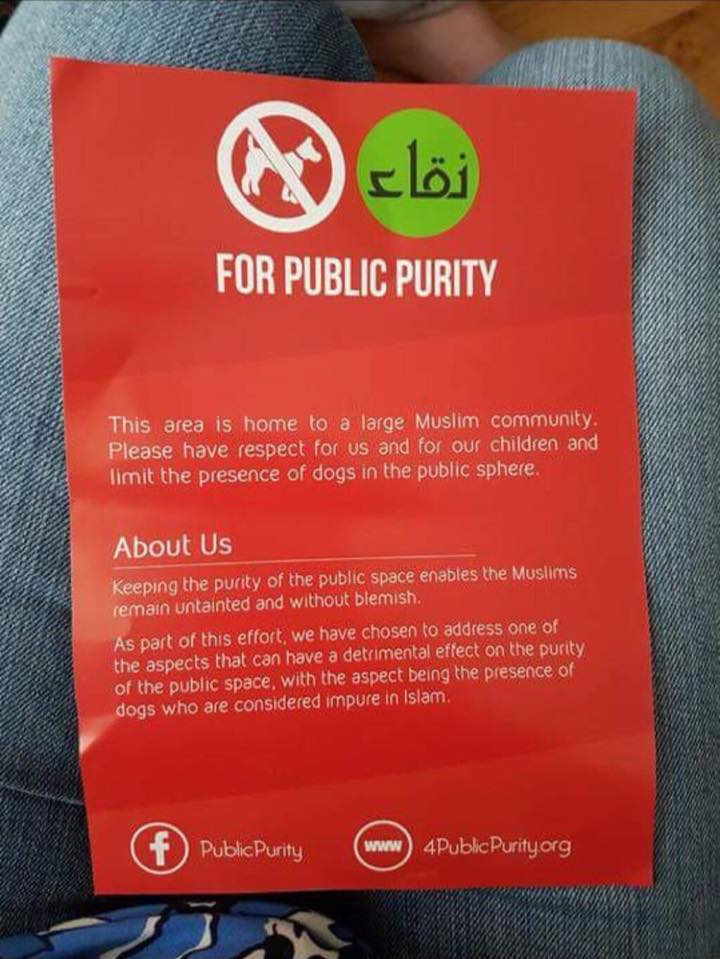 You know, I lived in Europe for 2 years. While I was there I made every attempt to be mindful of the culture I was moving in to. I attempted to learn the language (poorly) and abide by the customs of the people I was surrounded by.

This is called being polite. I did not ask "the natives" to conform to my way of thinking or my way of doing things.

Wake up Europe! You are being colonized!

EDIT:
Well, after further evidence was brought to light, it appears this is the work of trolls to stir up controversy. Hurrah to you, Trolls. You succeeded in fooling people (myself included) with your idiocy. Now go find something productive to do...
edit on 1-6-2018 by BomSquad because: revealed to be a hoax/troll

I would take dogs over 99% of the human population. No offense humans, but I'd much rather spend time with my pups than with most people.

originally posted by: ignorant_ape
i wonder if this " message " even comes for a moslem group - think about that : quo bono ?

Given that there are some places where even non-Muslim women are afraid to go out without a head covering of some sort, it very well could come from an actual Muslim group.

That doesn't mean it does, but only that it could.

I just visited it and it is a site about chairs for old folk.
The UK are a nation of dog lovers I know muslims with dogs around here so it isn't going to work.
edit on 1-6-2018 by testingtesting because: (no reason given)

posted on Jun, 1 2018 @ 01:47 PM
link
Carry on keeping your faithful friend by your side. Your children won't get groomed this way.
Win-win.


Let's put dogs to death to placate the radical islamists who we welcomed into our country because virtue signaling how superior we were intellectually to those who opposed us!

So how many of these Progressive Virtue Signalers own dogs and when can we expect them to kill their pets to adhere to the beliefs of the foreign invaders they fought to allow into their country?

Looking forward to seeing YT videos of these Islamic sympathizers killing their pets!!!

posted on Jun, 1 2018 @ 01:50 PM
link
No idea if authentic or not, but as my two dogs are intelligent, well-kept, and very well behaved on leash, it would be a cold day in hell before I don’t walk them in “the name of religion.” And people wonder why the world is concerned about fanatical Islam; well, aside from the terrorism.

I imagine my (and others) dogs are way more pure than a lot of humans. Most of them love unconditionally and only want to please. Maybe more humans, including the flyer distributors (and me sometimes) should try those attributes on for size.

posted on Jun, 1 2018 @ 01:51 PM
link
I wonder if someone was invited into their home, and that person demanded they make him bacon for breakfast and accommodate their service dog, if they would welcome that change openly. Or, would they refuse to do that to a guest?

I do not know the answer, and I hope some of the ATS members that are followers of Islam can answer this for me. The answer should also (hopefully) answer their behavior when welcomed into a non-Islamic country.

I am honestly curious about the answer.

It's very much real and they're nuts

Anyone can make a facebook page (used last in 2016) and post a few flyers, I live in a moderately high Muslim population place and yes a few of the older folk do not like dogs but I know a few Muslims with them so I do not see a massive muslim movement to ban dogs overhere.
The flyer is from 2016 and for some reason people have brought this back up.
I call hoax.

Good call mate, but your pissing in the wind here with most members

My God, something I agree with Islamics over, at least in regards to the end result. I wish Alaska would adopt this policy.

You got a link where you got the info and photo? where did you hear about this?.