posted on May, 16 2018 @ 08:27 AM
link
Just got back to Little Rock after 3 hour trip and experienced a rant o sorts. I have had a few jobs where I had to commute numerous miles daily and I am just flabbergasted at the behavior of some individuals on the highways. These folks that, no matter what, remain in the passing lane the entire time, often traveling at the exact speed limit(which I commend for legal reasons, yet they are breaking the law at the same time staying in passing lane), while most people drive a tad over speed limit in general. So is it ego? As in "I'm not gonna pull over for nobody?" I saw a guy do this for a solid 20 miles before he disappeared in my rear view. He was stalling next to 18 wheelers backing up traffic in the passing lane for miles. I saw angry drivers tailgate him, flip him off, pass aggressively on the inside and express other gestures of frustration.

I have traveled numerous times thru the long I-5 in Cali too and they are the worst at this(granted Cali drivers are also some of the best drivers in general as well) where there were no other cars for miles in any direction,and drivers still ride in left lane exclusively. Personally it is an interesting process internally, being behind them, getting angry and just wanting to pull in front of them and come to a stop to force them to switch lanes, then just taking a deep breath to relax, then laughing at how upset it makes me, haha. Ultimately I just let it go and smile, for this is how I have grown past letting road rage affect me, because it ain't worth it in the end.

Nevertheless, why? Why do they do this? It is fairly common and not limited to sex, race or age. It has to be a conscious decision and I can't help but feel they simply take pleasure in agitating others(kind of like some folks round here) Anyway, if nothing else, I hope this rant may change a left laner's mind and convince other's involved to just breath and let it all go rather than get aggressive. It is just bad that we have to break the law and pass on the inside lane to traverse this anomaly.

Get the hell over jackass..

posted on May, 16 2018 @ 08:53 AM
link
One of my biggest peeves. When I lived in Portland, OR, drivers there were the worst for this. Especially when I would occasionally drive I-5 down to Yuba City, CA to visit a friend. I couldn't go more than 15 minutes at a time without having to slow down and go around some jackass riding in the left lane.

They argue that they are going the speed limit so they shouldn't have to get over. BS. I do think a lot of it has to do with ego or maybe there are that many clueless drivers out there.

I always use my cruise control and set it to about 5 over the posted limit. Hate it when I have to brake and then get around people. They don't understand how much they impede the flow of traffic.

originally posted by: luthier
a reply to: waftist

DUDE! Exactly. Makes me go all Walter from The Big Lebowski on them. 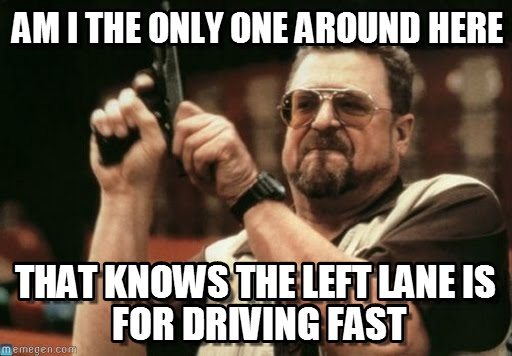 I often have fantasized about installing a rocket launcher to the hood of my car to counter exactly this behavior...

Been on the road for over 20 years and everywhere it's the same.....well except for Germany. It will wake you up in hurry if you are overtaking a vehicle at 90 mph and all of a sudden you see headlights blinking in your rear view mirror of a car coming at you at twice that speed.

a reply to: luthier
I know, and it just raises the level of angst and at some point something bad could happen...it ain't worth it, GET OVER!!

a reply to: jtrenthacker
Yes I agree and I have heard the speed limit argument and my roomie says that left lane driving is not illegal in all states?
It is an interesting piece of psychological perspective...and it sucks! Oh well, just pass and smile seems to be best for all I suppose, rather than having it raise our blood pressure.

a reply to: operation mindcrime
I feel bad after suggesting a peaceful reaction, but your post summons inner truth and I was imagining an emp device that you could aim and just disable their car! Not that I would ever do that..haja
edit on 3amf31040431 by waftist because: (no reason given)

posted on May, 16 2018 @ 09:03 AM
link
We have it in the UK too, they're middle lane hoggers on the motorway. I consider myself a peaceful, liberal and not at all a violent person but I would bring back the stocks for these people:

I would buy a pair of Google glasses if they had an app to simulate destruction of these vehicles.

At least it would make the ride some what amusing. Maybe every mile you get a new weapon.

posted on May, 16 2018 @ 09:07 AM
link
I think the next president should run on making the driving test harder and focus the driving laws on drivers who make life hell on the roads.
edit on 16-5-2018 by luthier because: (no reason given)

posted on May, 16 2018 @ 09:09 AM
link
I'm a pretty calm and peaceful person and never have road rage. The most I'll do is mutter under my breath and shake my head a little. People who lose their cool and tailgate, flip people off, etc have separate issues.

That said I do fantasize about equipping my SUV with a big steel plow so I could just push left lane drivers out of the way.

They jump out of the right lane just as you come up for the pass and match the speed of the car they should be passing.

" I'm not happy unless your unhappy too" types everywhere here.

When your not dealing with this type, you are dealing with the "that lane feels faster" crowd, with unneeded hyper-active lane changes that usually put them back in the slower lane.

It is freakin' insane

posted on May, 16 2018 @ 09:40 AM
link
Left lane isn't primarily a passing lane universally. Some states just make it a fast lane and don't mind if you drive in it. Maryland is one of them. I'll drive for many many miles in the left lane. I do it all the time, but I'm also going 10+ miles over the speed limit too. So I'm only really holding up people who want to go even faster than that.

That makes sense but if someone chooses to go faster and comes up behind you, do you not switch lanes for a moment and allow to pass? I think this is common courtesy and I am so grateful now when others do this(I do as well) that I actually wave thanks now.

originally posted by: Krazysh0t
Left lane isn't primarily a passing lane universally. Some states just make it a fast lane and don't mind if you drive in it. Maryland is one of them. I'll drive for many many miles in the left lane. I do it all the time, but I'm also going 10+ miles over the speed limit too. So I'm only really holding up people who want to go even faster than that.

I am a left laner but it is because I am typically driving well above speed limit. In urban areas, if you are going to be pushing/exceeding the speed limits, you have to say in left lane or else you will be constantly have to change lanes to pass slow pokes in middle and right lanes. Given the volume of traffic, this is far more dangerous than just staying in left lane.

Slow drivers are far more dangerous than speeders imho. The biggest issue is people not driving with the natural flow of traffic. Either driving way too fast or driving too slow.

With that said, when I do get out in rural areas where you may have a two lane highway, I do tend to observe the left lane for passing rule. Traffic is sparse enough and people generally driving fast enough even in right lane that camping out in left lane really isn't all that necessary.

I just find in general that people are not very good drivers. They are inattentive to their surroundings.

I do get annoyed with people driving too fast... There have been times where I am literally doing like 80mph in a 55mph and you still get some dipwad coming up on you tailgating because you aren't going fast enough.

originally posted by: Edumakated
I just find in general that people are not very good drivers. They are inattentive to their surroundings.

I can drive with my knees while texting better than anyone.

I recently drove a friends car who is basically my height and couldn't see how he could possibly see out his side mirrors. I asked how he could see out the mirrors. The response was I don't use those.

I think apple makes some pants with rubber grips that help for performance driving.