Hawaii -- Is an epic disaster unfolding in slow-motion?

posted on May, 14 2018 @ 10:09 AM
link
I've been following the eruptions on Mt. Kilauea on Hawaii's big island, and I noticed something that has me concerned.

Please take a look at the eruption maps here.

Basically, on April 30th, the caldera at the top of Mt. Kilauea collapsed, and since then the lava has been draining down underground toward the east coast of the island. (Yes, I know you're supposed to call it "magma" until it reaches the surface. Bite me.) It's erupting to the surface thru a series of cracks that have been opening along the way. The cracks appear to be opening up along a line stretching from the volcano to the shore.

What I'm wondering is, is it at all possible that a big chunk of the island is going to break off and slide into the sea? Because that's kinda what it's looking like.
edit on 14-5-2018 by AndyFromMichigan because: (no reason given)

posted on May, 14 2018 @ 10:25 AM
link
Unlikly the island will lose any amount of mass that could cause a tidle wave .
The lava turns to rock it also makes lava tubs thus the lava flows underground as you say .
coming up through cracks .
But these have very little ash from them so the lava rock is well hard as a rock lol .
wile small pices may brake nothing large enough to make waves .

Living on the west coast, that has me a little concerned. Is why I'm watching this a lot!

posted on May, 14 2018 @ 10:49 AM
link
Hawaii was built by volcanoes--entirely. If anything, Hawaii will wind up bigger than it was before. More magma means more land. If some of it "falls into the sea' it will just create more acres of land. That stuff has to go somewhere. It's a net gain.

What I'm wondering is, is it at all possible that a big chunk of the island is going to break off and slide into the sea? Because that's kinda what it's looking like.

It doesn't look like that will happen as you would need a Very Big eruption to do something like that. To Masterjaden, the Mega tsunami to watch for is when the Canary Islands blow up from a volcanic event. the Landslide of debris that will fall off the Western Edge into the deep Atlantic will be a very deadly one when or if it happens.

I had written a long post and it got zapped by phone gremlins. lol. This is the short version.

Surface pressure may be low around there but if enough surface area is shattered with veins of oozing magma, then deeper contents under more pressure could shift in that direction.

Volcanoes can erupt with the power of several nukes. NEVER be comfortable around them.

Plenty of peoples lived for generations next to volcanoes and then died in their entirety or in mass very abruptly.

The earth is a bubble.

So as Hank Johnson would say, don't everyone lean to one side or the island will tip over

Other areas that may have high background concentrations of gold include large igneous provinces — vast accumulations of igneous, or volcanically produced, rocks in the Earth's crust — such as the East African Rift, the Deccan Traps in central India, and the Siberian Traps in northern Russia. The Hawaiian Islands, which were formed over a mantle hotspot and are composed of igneous rocks, also are likely to have higher concentrations of gold and other rare metals, Webber said.

Flank collapses are common (geologically speaking) at island volcanoe chains formed though "hot spot" magmatic intrusions direct from the mantle and below.

That said, it is nearly always erosion rather than explosive eruption that seems to cause them, particularly on Hawaii type volcanoes (not strato volcanoes).

posted on May, 14 2018 @ 11:35 AM
link
I'm more concerned about how it's effecting the Ring of Fire. Really concerned of it's effects on our fault lines here in California .

Seems more likely to me that we are seeing new lava tubes being formed, not the cleaving of a whole massive section of an island.

But I'm not a geologist, but I have always been interested in the science. Anything is possible, though--if it wasn't for things like Krakatoa or Mt. St. Helens, I'd probably tell you that a volcano destroying large percentages of a mountain with an eruption was "impossible." That's not really a word that I use anymore when it comes to natural phenomena.

That is an interesting video. So the OP might actually be possible. It slipped two feet this time but it may not be finished.

originally posted by: Gargoyle91
I'm more concerned about how it's effecting the Ring of Fire. Really concerned of it's effects on our fault lines here in California .

Why? Why would a hot spot volcano in Hawaii affect fault lines in California?

Both Mount St Helens and Krakatoa (Anak Krakatoa now) are strato volcanoes. And it was actually phreatic explosions that really did for Krakatoa, when the cone collapsed enough for sea water to rush in. If that happens to Kileaua something has gone drastically wrong!

it seems like it's a regular occurence that happens every 2-3 years... they were expecting it to happen soon months ago even. one day, ya, the whole area might shift enough to cause a huge tidal wave, but every few years, it shifts a little more towards the sea.

Why? The "Ring of Fire" doesn't include the source of Hawai'i's volcanoes. 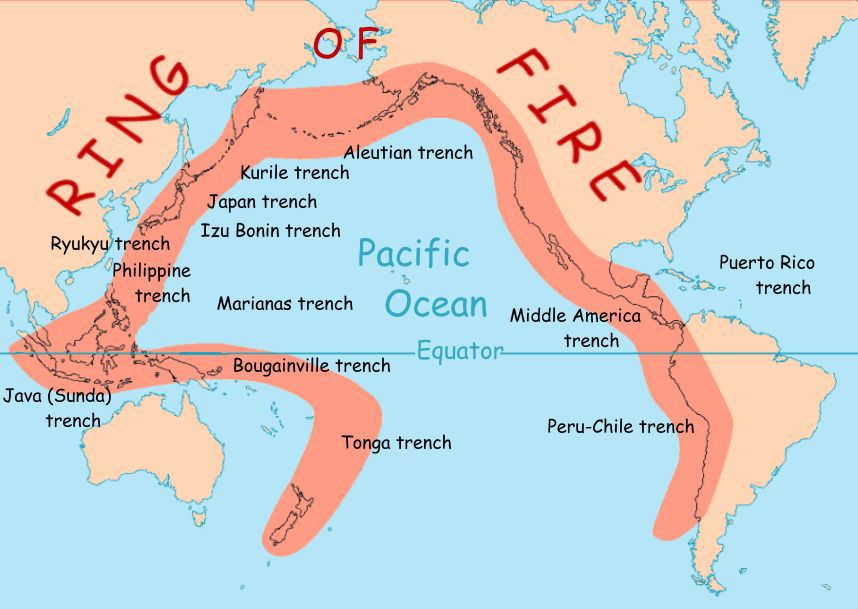 From what I understand, the source of the Hawai'i islands is not a part of a fault line, but a volcanic hotspot, which is a completely different source of magma. All of the islands that make up Hawai'i once sat over that hotspot, and over time, have moved west and then north with the Pacific Plate. This has been happening for a very, very long time, and islands that used to be part of the chain that makes up Hawai'i have since weathered down and gone back under the sea.

You can see how these islands have moved over time by just looking at the floor of the Pacific Ocean.

Again, though, it seems that this hotspot has nothing to do with nor any impact on the fault lines that create the Ring of Fire. All of the reported concerns seem like hyperbole and fear-mongering--the foundation of modern news reporting.

Point being, I think that any concern is way overblown about California's fault lines.