B-21 Patch Appears on Ebay. Real or Bogus?

Or the problem was encountered some time ago and they fixed a while ago...and they are leaking the info out now bit by bit as they get closer to the unveil.

well thats new to me

Weren't there sightings of it or something really similar in the Palmdale area nearly two years ago?

I always figured that the flyoff involved the "YB-21" vs the "YB-22" while B-21 EMD bird has been flying over the past year or two and when they pull the curtain back on the project we'll see the 1st LRIP bird.

That's more or less how the ATF and the JSF competions shook out in the white world, how the ATA apparently shook out on the black, and I'd honestly be shocked if the ATB competition didn't go down the exact same way and the only reason why we haven't seen the demonstrator airframes is that they got repurposed for other still-black programs.
edit on 30-3-2018 by Barnalby because: (no reason given)

I saw what I assume was it going into Palmdale about a year ago or so. The size based on the lights was about right, as was the timing.

Now, the real question I have is whether the EMD bird is a heavily modified upgrade of the competition demonstrator, testing sub-componenents on a "close-enough" airframe, or a bare bones YB-52 style prototype airframe that is more or less identical to the real deal minus the subsystems that will be added in as they mature through the EMD process.

I guess the answer to that one will probably boil down to whether the competition bird was an original build or an adaptation of an existing airframe from NGB or something similar, though I guess if it was original for the LRS-B competition it still could be a bare-bones demonstrator a la the YF-22 and the X-35.
edit on 30-3-2018 by Barnalby because: (no reason given) 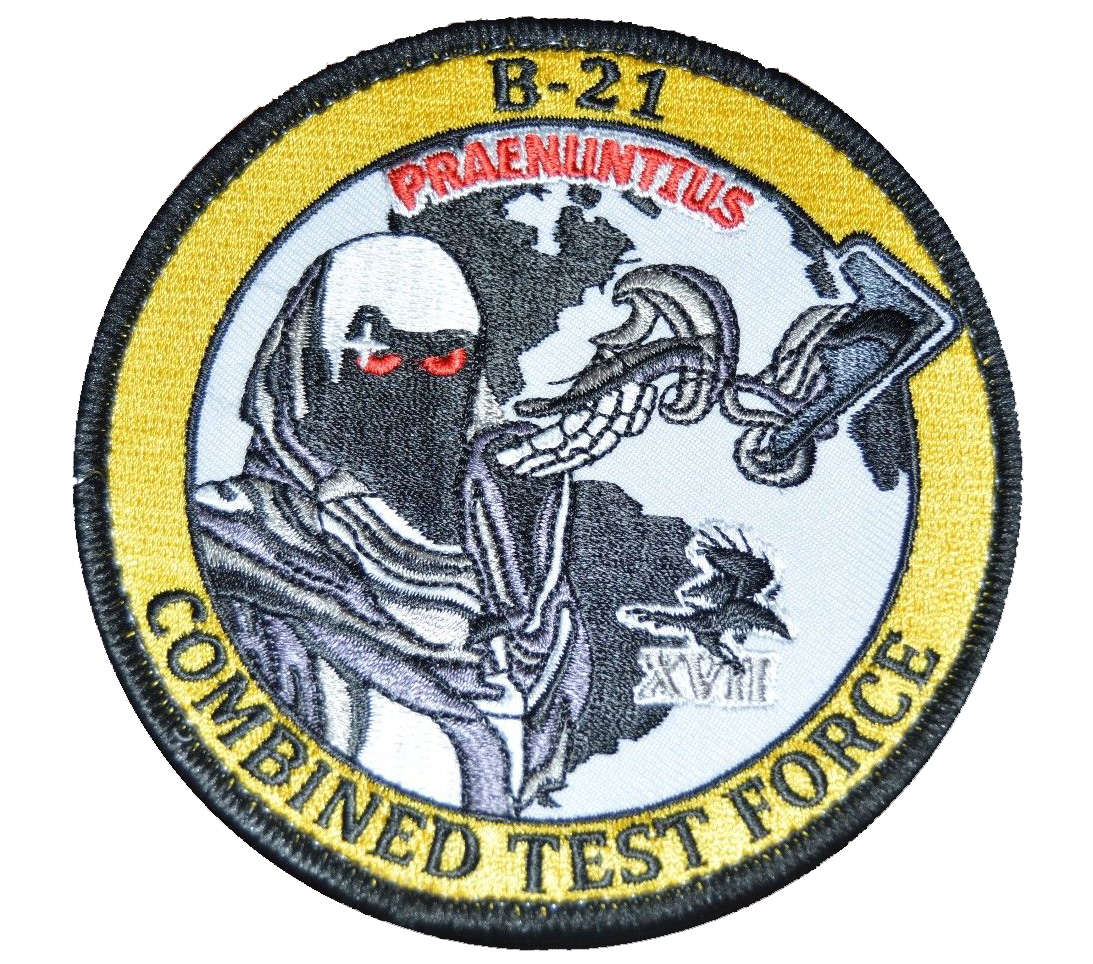 
I agree.
Not enough stars on the patch.
Not enough real info.
It lacks "the right stuff"
Then again... I dont know what you guys know... Would a patch like this signify that it's being tested down south? one more edit.
God gosh, according to this patch, that thing looks like the A-12

Well that's because it kinda DOES look like an Avenger. So does the B-2. They are all flying wings. Goes to show you how long we have had this same design in our back pocket.

posted on Apr, 2 2018 @ 07:48 AM
link
I have to admit I have zero knowledge on military patches but the embroidery not being symmetrical certainly catches my eye, surely an official patch has the writing look more in line around the rim, the "C" in combined looks further around than the "E" at the end of force.

posted on Apr, 2 2018 @ 09:34 AM
link
I thought the hand holding a stylised mushroom (presumably as in "mushroom cloud") was a nice touch, whether or not the patch is real.

posted on Apr, 2 2018 @ 09:41 AM
link
If Shadowhawk says real, then I'm willing to believe him. If they're letting them be seen walking around, we really are close to seeing it flying around.

I'm still not sure why this is generating so much interest. Every test organization makes patches. This has been a tradition since the 1940s. Even programs that were cancelled without producing a single flying airframe had patches. For example, there are more than half a dozen different patches for the MDD/GD A-12 Avenger. The same for the ultimately cancelled AGM-137 TSSAM.

We probably won't see an actual B-21 for years yet and there are already at least five patches out there. Several of them have appeared on eBay over the past year or so, along with pins, coins, mugs, and hats.

It's also funny to see people criticize the patch embroidery and artwork. Take a look at some of the goofy patches for the F-22 or F-35. Better yet, pick up Pat Blazek's book on patches of the F-117A program.

Of course they do, but with the comments recently coming out of Edwards and the occasional comment out of the Pentagon, it's interesting. Until the actual aircraft is seen flying around, just about anything about it will cause a buzz.


"The 17th Bombardment Group is an inactive United States Air Force unit. The group was last stationed at Hurlburt Field, Florida."
17th Bombardment squadron
Interesting how there's a "17" in Roman numerals, and the 17th participated in the Doolittle raids.
Inactive my foot.

With this being a test patch it's probably not the 17 Bomb Squadron. It makes more sense that it would be the 417th Flight Test Squadron.

originally posted by: Zaphod58
a reply to: HomeyKXTA

With this being a test patch it's probably not the 17 Bomb Squadron. It makes more sense that it would be the 417th Flight Test Squadron.

B-21 officially announce at Edwards

"....during a fairly obscure regional business conference attended by Brigadier General Carl Schaefer, the boss of the expansive 412th Test Wing at Edwards Air Force Base. During his remarks he made it clear that B-21's testing home would be Edwards Air Force Base, and that the stealth bomber will be heading there sooner than some may have speculated."
So I guess the 417th squadron is under the umbrella of the 412th.
edit on 4122018 by HomeyKXTA because: I'm an idiot.

It was part of the 412th Operations Group. They tested the C-17, then stood down until the YAL-1A began testing, then deactivated again in 2012 when that program shut down.