You'll never see the evidence. The last time congress issued a subpoena to see the evidence they wiped it clean with bleachbit and smashed it with hammers, and the people who did it pleaded the 5th and got away no strings attached. 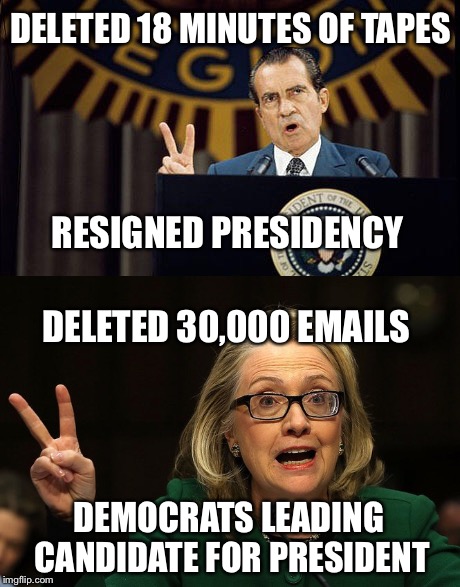 At this point, what difference DOES IT MAKE?

As an “appointed” representative to BHOs regime, how on earth did she get away with talking AT Congress?

Where are the 302s from Hillary’s 4th of July interview?

How quickly did the FBI change course...

posted on Mar, 3 2018 @ 04:32 PM
link
I don't know about "civil war" in the sense of left vs right ... hopefully people could rise above the team ideology the elite have effectively used in the U.S.

I've been inured to the right wing conspiracy narrative because they've been silly, mean spirited and obviously "part of the game" most of the time and the people pushing the narratives didn't really believe them, either...

this is different. This isn't partisan games ... this stinks.

Ha...I should have added who killed him..

originally posted by: underwerks
Hilarious thread. No where in the article in the OP is anything from Seth Rich's father, at all. The thread title is a lie.

Speaking to Butowsky by phone on Thursday evening, he told the Gateway Pundit that during a conversation with Joel Rich on December 17, 2016 at 3:17 p.m., the father stated “we know what our sons did, but we just want to find Seth’s killer.”

So Butowsky said Seth Rich's father told him that. Lmao. The same Butowsky who is the subject of a lawsuit for making up lies about the Seth Rich story.

The Fox News Channel and a wealthy supporter of President Trump worked in concert under the watchful eye of the White House to concoct a story about the death of a young Democratic National Committee aide, according to a lawsuit filed Tuesday.

The explosive claim is part of a lawsuit filed against Fox News by Rod Wheeler, a longtime paid commentator for the news network. The suit was obtained exclusively by NPR.


The story, which first aired in May, was retracted by Fox News a week later. Fox News has, to date, taken no action in response to what it said was a failure to adhere to the network's standards.

I feel sorry for everyone who flagged this to get it to the front page, if they're actually people.

How did Seth Rich Die? Do we have definitive proof of it one way or the other? Who killed him? Was anything robbed from Seth Rich? Did he have Two phones?

Did Seth's parents hire an investigator? Why?

Was Seth disillusioned by what took place in the Primary?


Lots of questions, I suppose you have the answers underwerks?

This is something that gets overlooked all the time. Trumps uncle was a FBI Agent. Do we know if he has family friends in the FBI? If so this could explain how he always seems to be ahead of the game, or how he does one thing while the reporters seem to be following a "source" in the DOJ doing something else.

Like today, Did Trump get a tip off of a possible suicidal taking place near the White House, so he decides to hit Florida (like many of the events that happened while he was away) ? Those events would have been a bigger deal if he was at the White House when they happened, and yet the weird discussion was "didn't the FBI know about this, didn't the Secret Service Know about that?" Maybe they did after all. Of course if this is true then we might have heads exploding everywhere, since it would mean that Trump is playing the fool, while planning his next move (kind of like he was reading the "Art of War", like many 80's business types did back in the day)


Wow, the Rich autopsy report is not being released to investigators at the time of this video what is the date of this interview?
(ETA that was Jun 2017 and that was many months after the crime)

If that interview is recent as it seems, then that is huge. I remember when he got that 'shut the hell up order' from the family. All this officially is unsolved and by keeping data back that solves it, like the officer reports and officer video's, is standard Marxist tactics of pushing it out of the public's mind.

The smear campaign on the investigator is telling to those of us not mesmerized by the media orations an obfuscations.
edit on 4-3-2018 by Justoneman because: (no reason given)

posted on Mar, 4 2018 @ 08:00 AM
link
a reply to: Justoneman
You have to remember that Seth Rich was going to testify to the FBI about the polling guys on voting day, that slimey racket that smells!
He was getting #faced, not just out drinking having a good time big woo hoo his girlfriend had just broke up with him.
Has anybody talked to her. Did she spill the beans on him?
The people and money involved with the polls is not released publicly?

things that make you go world trade fedearation wtf as we are all human have the same foibles and weaknesses.


That is horrible advice. Are you really trying to encourage new members to be completely illogical?

The thread has many flags because many people would love for it to be true, but just by looking at the source you can tell it's a garbage claim. No proof presented. Just confirmation bias.

My advice for new members would be to think for yourselves and don't believe everything that fits your biases.

You seem stressed - my advice would be to take many different pharmaceuticals and revert via post in 30mins if you are still feeling butthurt.

Another great example for new members to see.

If you cannot make an intelligent response, just revert to the same tactics as a high school douchebag.

You're really setting a great example for the membership at ATS, Sublime. If all else fails, let your stupidity and emotions take the wheel.

Thanks for taking the high road. You are an inspiration to us all.

originally posted by: Justoneman
This may be already on ATS, but I looked 1st.

Big news the Dad knows it was his son that leaked to Wikileaks. This may be old news to some but it was in today's news stories and is still an unsolved murder that IMO was not a botched robbery at all. Where are the LEO personal cam video's?

Correction: Ed Butowski claims that Seth Rich's father told him his son was "the DNC leaker." That is an entirely different kettle of rotten fish.
edit on 4-3-2018 by DJW001 because: (no reason given)

Right. Associate of Breitbart.com who doesn't know the Rich family.
But for this narrative we're going to ignore that. Lol

ummm you can back this statement up right? Please do.

originally posted by: SoulSurfer
a reply to: Justoneman

His name was seth rich. and He is a Hero. Never forget.

Absolutely! It is sickening that there are those here trying to smear his name. I hope justice is served in some way on his perpetrators. Evidence seems to point to DNC perpetrators.


Advice to new ats members:
Threads that have 54 flags and 16 replies are for the most part alt-right fan fiction threads
You can find tens of threads with even more stars and fewer posts that turned out to be nothing burgers.
It's not that hard to prove.
Use the search engine and type alt-right buzzwords such as "deep state" , "tick-tock", "secret society" , "Podesta", "Awan brothers" etc.


This requires a neutral mind to understand at minimum. Some people are so far left the rest of us just appear right to the leftist. The dems have turned so far left I don't recognize the ones from the 'reformed' 70's even. It makes it easy for the R's to win in certain states. I suspect the R's having so many RINO's is the only way the Deep state can keep up the lies and not all be in the Graybar motel near Leavenworth KS.

Seth Rich was murdered by the DNC.

There is no way around this.

We know he is the leaker.

That is not a right wing talking point its just what happened. Seth Rich was on the left..... Just like me.

Grow up and face the hard facts everyone.

These are gangsters, money launderers, murderers, thieves, and depraved individuals. They won't rat themselves out. There is dirt on most of them.
People will have to get a lot more tough on "gangs" if we want to see the light at the end of all this.

I personally get it. I don't want my family threatened ever again, but something has to change.

I hear you. I'm a recovering Democrat. I voted Trump, but I'm not easily classified as a conservative. I'm an independent who'll vote for the best candidate across party lines. So far the Democrats still look like they are lacking a true leader.


I would posit that Podesta set up the hit, either at her behest, or on his own to appease her.