page: 1
32
<<   2  3  4 >>
log in
join
share:
theantediluvian
+12 more
posted on Feb, 26 2018 @ 09:11 PM
link
On Saturday, Delta Airlines announced that it was ending its contract for discounted rates with the NRA. And now Georgia's Lt. Governor, Casey Cagle, is publicly threatening to take legislative action against Delta. 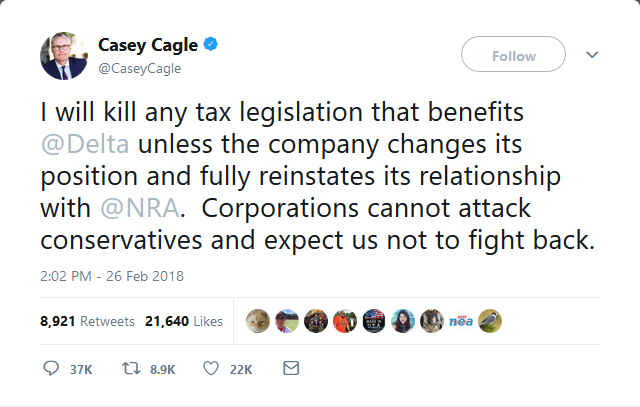 Let that sink in. The Lt. Governor of Georgia is threatening one of the state's largest employers and an airline that is largely responsible for making Hartsfield-Jackson the world's busiest airport — to provide discounted services to a right-wing lobbying group or face legislative reprisal.

Casey's extortion scheme is almost certainly unconstitutional, particularly when you consider that in the Citizens United decision, the right-wing stacked SCOTUS ruled that businesses have much of the same rights to political speech as individuals.

No matter how people feel about tax breaks and other subsidization, I find it really hard to believe that anyone honestly believes that they should be tied to a political lobbying organization getting kickbacks.

Lets not pretend that this sort of thing Doesn't go on behind closed doors. The fact that this is a very public statement reeks of desperation.

Elections this year has me thinking that plenty will try to capture the same gusto Trump used to get elected..even on the wrong premises.

The interesting thing is, all of these companies cutting their corporate discounts for NRA, and the politically-charged conversations about gun control have only spurred more individuals to buy guns

Wouldn't ya know it..

Because of them we have the TSA and legal government groping.

Tax the crap out of them. Yee-Haw!!

posted on Feb, 26 2018 @ 09:27 PM
link
Cagle is the leading GOP candidate for Governor against a weak but highly motivated Democratic field. He likely got his marching orders from the NRA to use this as a wedge issue in the primary. GA could turn blue and it will be a bare knuckle brawl until November.
edit on 2/26/2018 by kosmicjack because: (no reason given)

Nothing in the Constitution defending Corporations, whatsoever. Finally some backlash for Corporations that lick their fingers, stick them in the air and see which way the wind is blowing that particular day.

The mere fact that Delta gave the NRA a discount in the first place- which I disagree with-is proof positive of 'weather vein style' decision making.

My hope is this sends a message for Corporations stay the hell out of political issues when clearly, CLEARLY, they are doing nothing more than appeasing their perceived base.

Delta is a major airline, its main hub is in Atlanta Ga. Lets say he does that, decides to go after them tax wise. The question is would it be worth to Delta to stay or would there be, say another state that would be more welcoming to Delta, that they could set up shop in.

posted on Feb, 26 2018 @ 09:45 PM
link
I think AD is right. The SCOTUS just struck down (thank God) the terrible laws put up by many state governments, liberal and conservative, who threatened citizens with reprisals for supporting the Israel boycott.


This looks similar to that

BlueAjah
+3 more
posted on Feb, 26 2018 @ 09:54 PM
link
Why should airlines get special tax treatment in the first place? I thought Dems were against that kind of thing. They should be happy if Delta stops getting a tax break.

why is Delta having legislation that benefits it passed?

Real people work at these companies.

You really think those were actors? wow

posted on Feb, 26 2018 @ 10:24 PM
link
The GOP getting involved in telling a capitalistic free enterprise corporation how to run their business. Maybe they should just make it a state run airline.

And here all this time I thought they were for deregulation, lower taxes and less government involvement. guess not...
edit on 26-2-2018 by olaru12 because: (no reason given)

posted on Feb, 26 2018 @ 10:34 PM
link
If Georgia can give tax breaks , Georgia can take em away .
My State giving the "Flyin Fickled Finger of Fate Award" to the poor little limp wristed libbies . I just did , too
That is all
Carry on.

posted on Feb, 26 2018 @ 10:44 PM
link
Delta should just put Cagle on a "no fly" list for threatening a public carrier. The other carriers will honor Delta, then Casey will have to GO Greyhound.

originally posted by: Greven
a reply to: Gothmog


I am ok with taking back tax breaks if the State government has a need...yes.

I get what you are saying. This sounds shady. But... I cannot help but wonder... why is Delta dropping the NRA? Could it be because of political pressure because of a certain shooting that seems rather shady itself? And would you not expect a political response? To be honest, I despise the NRA, and I do not believe for one second that they actually support the 2nd (they support the gun lobby, which is entirely different). And yet, you seem to be making the Hegelian Dialectic case. I dunno. As always, people will reach their own conclusions.
edit on 26-2-2018 by MisterMcKill because: clarification

Oh how the tides have turned. Liberals are suddenly defending big corporations, and have become pro tax breaks for them too. LOL.

I find it hard to believe you are so naive to actually think that anything is not tied to political lobbying. May I remind you of Solar city ?