could be too, take a look at the drawing, the being has no mouth!

originally posted by: humanoidlord
could be too, take a look at the drawing, the being has no mouth!


Except for the mouth, the drawing from the article is somewhat reminiscent of a Japanese-style ghost 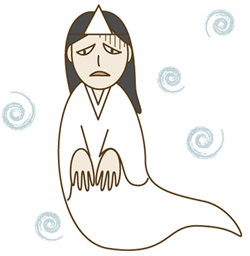 originally posted by: stormcell
Udon noodles from a Road-side cafe? I'd be careful what they put in those things to give them flavour. I'm thinking fungi contamination.

lol, i saw that too. Like gas station sushi, grab a rice ball instead.

Japan in the 70's? Robots, AI, Anime, but then aliens could be showing themselves to us through time in ways they think we'd be comfortable with, at the time.

i can see the resemblance, meybe its just the drawing style?

comfortable? i dont think an cyborg head changing alien would be an pleasing sight

originally posted by: humanoidlord
i can see the resemblance, meybe its just the drawing style?


It's the traditional Japanese representation of a ghost, and regardless of the style, it has several features that coincide, like the stringy black hair, dark black eyes, white skin, the one-piece robe-like garment. In some illustrations, there is that triangle on the head, which could roughly be seen as a "horn" of some kind.

I don't know. If I was a Japanese debunker, I certainly would suggest that rather than seeing an "alien," the guy saw a particularly playful ghost. Unless the alien was pretending to be a ghost, filling the witness's mind with a familiar image rather than allowing him to see her true form.

i know a bunch of those weird crossover events, the most classic example is seeing an bigfoot like creature in a ufo

originally posted by: humanoidlord
comfortable? i dont think an cyborg head changing alien would be an pleasing sight