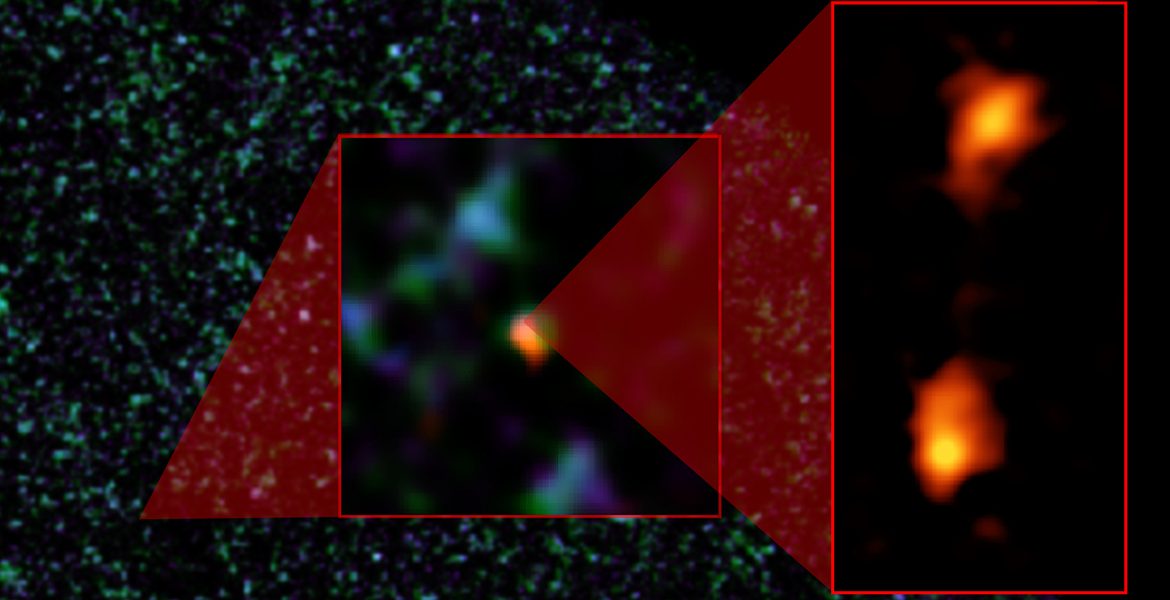 According to Dominik Riechers, an astronomer at Cornell University in New York finding one hyper-luminous starburst galaxy is remarkable but discovering two in the process of merging is "truly astounding".


“Considering their extreme distance from Earth and the frenetic star-forming activity inside each, it’s possible we may be witnessing the most intense galaxy merger known to date.”

The merger of the two hyper-luminous starburst galaxies happened close to the beginning of time when the Universe was about 1 Billion years old.


Astronomers first detected this system with the European Space Agency’s Herschel Space Observatory. It appeared as a single red dot in the telescope’s survey of the southern sky. These initial observations suggested that the apparently faint object was in fact both extremely bright and extremely distant. Follow-up observations with the Atacama Pathfinder EXperiment (APEX) telescope confirmed these initial interpretations and paved the way for the more detailed ALMA observations.

With its higher resolution and greater sensitivity, ALMA precisely measured the distance to this object and revealed that it was in fact two distinct galaxies. The pairing of otherwise phenomenally rare galaxies suggests that they reside within a particularly dense region of the universe at that period in its history, the astronomers said.

The new ALMA observations also indicate that the ADFS-27 system has approximately 50 times the amount of star-forming gas as the Milky Way. “Much of this gas will be converted into new stars very quickly,” said Riechers. “Our current observations indicate that these two galaxies are indeed producing stars at a breakneck pace, about one thousand times faster than our home galaxy.”

The galaxies — which would appear as flat, rotating disks — are brimming with extremely bright and massive blue stars. Most of this intense starlight, however, never makes it out of the galaxies themselves; there is simply too much obscuring interstellar dust in each


The new observations also indicate that the two galaxies are about 30,000 light-years apart, moving at roughly several hundred kilometers per second relative to each other. As they continue to interact gravitationally, each galaxy will eventually slow and fall toward the other, likely leading to several more close encounters before merging into one massive, elliptical galaxy. The astronomers expect this process to take a few hundred million years.
“Due to their great distance and dustiness, these galaxies remain completely undetected at visible wavelengths,” noted Riechers. “Eventually, we hope to combine the exquisite ALMA data with future infrared observations with NASA’s James Webb Space Telescope. These two telescopes will form an astronomer’s ‘dream team’ to better understand the nature of this and other such exceptionally rare, extreme systems.”
public.nrao.edu...

The scientists believe the collision of these two behemoths could have gone on to create the core of an entire galaxy cluster which are among the most massive structures in the universe.


What seemed at first like a rare instance of a huge, ancient galaxy revealed itself to be an even rarer pair of extremely massive galaxies, seen on the brink of merging when the Universe was only a billion years old.

How's that for a Sunday mind melter.

well thats ok If you believe that it all went bang.
and the mater that made up those galaxy's traveled
thire at 14 billion light year speed in a day! +/-
and a complete galaxy can form and crash into each other in 1 B years.
Oh I see you believe god made it all on one of those 6 days?

we ONLY Just stop't. or stopping!
to believe that the earth is flat!

The light / radio signal has taken 12.7 billion years to get here , the Galaxy merger happened in the early days of the Universe if the current model is correct.
edit on 19-11-2017 by gortex because: (no reason given)

posted on Nov, 19 2017 @ 02:04 PM
link
It's always a bit strange that from every viewpoint in the galaxy, the observer remains in the future.

I cannot wrap my head around what you just said. Our past, someone else's future..because of the time it takes for that event to be observed from another point in time/space.

You can be dead in your present, but alive in someone else's present, because your death has not happened yet, but will in that observers future to come, if they were looking back at you.

The only way this can be is if time itself does not actually exist, but everything is just a moment happening at once. We perceive time because of our insignificance on the cosmic scale of things. Whatever created this obviously has no concept of such a thing as time.

The past and the present exist as one "At all times"

Were there fewer galaxies back then? I mean, I wonder how uncommon such an occurrence may have been. With the Universe being smaller and everything. Maybe, like the early solar system, collisions were closer to norm than unusual.

Sweet find. Space and it's mysteries and discoveries never get old.

Round and round the light, it goes.

How old it it really is, God only knows.

posted on Nov, 23 2017 @ 12:01 PM
link
I would like to point out one important thing that seems to be consistently missed when discussing finds like this. The universe is much MUCH older than the mere 14 billion years we attribute to it. The reason for that number/age is because that is the "oldest" light sources we can "clearly" see with our most powerful telescope. In time we will create telescopes that see much farther, thus extending our guesstimated age of the universe. To say what we can see now is the definitive age of the universe is very short sighted indeed. It would be similar to saying that only what you can see with your eyes exists and everything else (neutrinos, atoms, electrons, bacteria, etc) don't exist. Indeed at one time we truly believed that, much as we believed that the earth was the center of the solar system or that the earth was flat. Since then however, we have created more and more powerful microscopes/telescopes to allow us to see ever smaller/farther things. In fact the "earth being the center" is the exact problem we have here, we assume that because we can only see 14 billion light years in every direction that that must be the age of the universe, which conveniently puts us in the exact center of the universe... my aren't we humble. We tend to be a very narcissistic species that doesn't like to think of ourselves as anything less than the absolute center of everything.

originally posted by: gortex
a reply to: looneylupinsrevenge

True, I can agree with that. It just bothers me that people seem to continually misinturpret and confuse the most distant star we can currently see with the total age of the universe.

star gazing is the only time travel we have right now

There should be a 24/7 recording of stars if we want to review what we have seen.

But , I wonder if the stars we see will actually be in that same spot of our skies . Meaning that light bends by gravity so if we would shoot a beam that would go faster than light it might be that particular star wouldn't even be on the spot we see from earth?

originally posted by: 0bserver1
a reply to: penroc3
But , I wonder if the stars we see will actually be in that same spot of our skies . Meaning that light bends by gravity so if we would shoot a beam that would go faster than light it might be that particular star wouldn't even be on the spot we see from earth?

Actually you are correct, not only for the reason you listed but also because everything we see in the sky is moving. Each planet goes around a star, the solar system around the galactic center, and the galaxy around or maybe away from the universal center point (i.e. the exact center of the universe, where the theoretical "big bang" is supposed to have taken place). So yeah basically what we see in the night sky is where everything was x number of years ago, not where it is right now. So if we did indeed send a faster than light pulse it would have to take into account all the above mentioned movement, gravitational lensing (as you mentioned), and any movement that would happen between the time the pulse left earth and when it arrived at its destination before you'd ever have a hope of hitting the intended target. Of course there is also the possibility (bordering on certainty) that there are unknown stellar phenomenon that we don't know or understand properly that could interfere with said transmission. Making it a garbled mess when it arrives or perhaps even preventing it from arriving at all.

So if we want to be successful we have to send a heavy photon because in its vicinity of gravity it bends and can keep us on the right track of finding the right star if it's not bend by any other gravity force along the way?