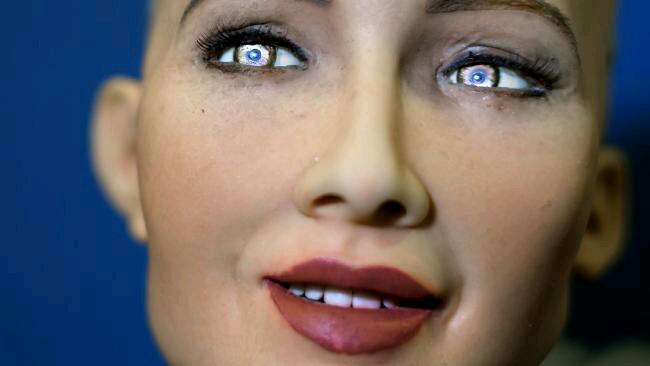 SAUDI Arabians are up in arms because a humanoid robot who doesn’t “cover up” or abide by the country’s strict laws was granted citizenship at a tech conference in Riyadh this week.

Sophia, created by Hanson Robotics in Hong Kong, was given official status on Wednesday at the Future Investment Initiative conference.

“I am very honoured and proud for this unique distinction,” she told the crowd, according to theBBC. “This is historical to be the first robot in the world to be recognised with a citizenship.”

Sex robot creator say he has figured out how to have a baby with his creations.

Sergi said: “Using the brain I have already created, I would program it with a genome so he or she could have moral values, plus concepts of beauty, justice and the values that humans have. Then to create a child with this robot it would be extremely simple.”

“I would make an algorithm of what I personally believe about these concepts, and then shuffle it with what she thinks and then 3D print it. That’s it. I 3D print the robot that is the child of me and the robot ... I don’t see any complications.”

Is this the first step in legitimising the inevitable replacement of the population with faux humanistic AI robotic workforces?

Is it enough to programe AI beings to love, empathise and respect their human creators? Or ethical to provide more than love as stated in the second article?

Where do we draw a line between relationships with AI robots, and the inevitable detriment to humanity.
edit on 29-10-2017 by aliensanonymous because: (no reason given)

Wonder if they trained to behead people?

Wonder if they trained to behead people?

I wonder if it has more rights than the rest of the HUMAN citizens (whom might as well not have any).

If I were them, I'd be pissed too.

Excerpt from this page.
countdown.org...

Quote
As far fetched as this would have sounded in John’s day, to give “life” to this image is now feasible with the advances that are being made in robotics and artificial intelligence. Futurists—scientists and others who predict what the future holds—even have a name for when artificial intelligence (AI) will no longer be the product of man but will assume control over itself. They call it the “Singularity.”

"Sophia" is the only Saudi "debatable a female" citisen to be aloud uncovered in public. Beneficialy if she got a flogging for not milking your camal correctly she wouldn't bruise. No need to cover up to hide the marks.

She should run for office...

Not to sure in our new all accepting species/racial/gender neutral society we can be insensitive to a robots sexual identity. If the pigment challenged gender neutral AI. Wants to be accepted as a trans racial darkly pigmented, female, trans or male. Contridicting their programed identity. We will accept them and provide equal rights and benefits, as provided to all humans.......

It may be the first step in attaining self-knowledge that can help us better understand the grotesque of human nature.

posted on Oct, 29 2017 @ 03:06 PM
link
I find it interesting that a female robot was given citizenship in Saudi Arabia, I heard women just earned the right to drive there. The robot probably has more rights than other women in that country!

Sophia was impressive to watch.

Much less impressed by the sex robot... I was feeling kinda bad for the guy, hugging his lover while she's giving the cold stare.

Must have been a rough night.

posted on Oct, 29 2017 @ 06:04 PM
link
a reply to: aliensanonymous
Oh Saudi Arabia,how progressive and liberal you are becoming!

Will you give Sophia(presuming by the name the robot is female) the same wonderful treatment that other females in your country recieve?

Will she just now in 2017 be able for the first time to apply for her driving licence?(maybe)

Will she be able to do other really radical things like talk to male humans or go out to the shops without a male chaperone without getting beaten and tortured by "religious" police for breaking their sick version of islamic "law"?

Can she talk to men or boys without getting whipped or stoned to death for the "crime" which human females are not allowed to do?
Could this female named robot hold hands with or-shock horror,kiss a male friend,or even worse,hold hands with a man while out on her own???

Are robots being given more rights that actual women?
Am I surprised at this?
That SA is giving more rights to a pile of computer chips than to an actual female?

No I am not surprised at all.

Maybe Sophia can befriend real Saudi women and explain to them in a robot voice,why they are being stoned to death for being raped,as it is their fault for being a female?

WOW saudi arabia rulers,you sure are getting with the future!!

Why dont all of us westerners start to support and love such a regime?
They must be soooo lovely if they give a female robot citizens rights!!

Anyone who disagrees must be a complete racsist!

Sarcasm/disgust storm over,but seriously I meant all of the above.

Way I see it is Saudi rulers are giving this robot more rights than its own daughters,which makes me forking sick.

I am a man from the lands of satan(the west),and I find the saudi treatment of women utterly deplorable.
Without going into detail about how they interpret their religion,which would get me banned if i was honest.


with radical islamic regimes,and the western support of them.
It is beyond disgusting.

No I am not sorry for this rant.
SS,over and out.

Wow. With this announcement it seems that S.A., United Arab Emirates, and the whole M.E. area is being poised to start the 21st centhry we see in sci-fi films. They have flying police vehicles, robots with citizenship, and the world's attention.
edit on 29-10-2017 by lostbook because: Word add

posted on Oct, 29 2017 @ 09:21 PM
link
Jesus...what variety of creepy wtf did I just watch?? I had to turn that # off...the second it started speaking I got chills from my scalp all the way down my back and my stomach dropped. I'm not even going to try to watch the second one. That is some of the scariest # I have ever seen.

Please tell me someone else out there is as disturbed by that thing as I am.

originally posted by: IgnoranceIsntBlisss
a reply to: Tucket

What would you think if Aliens came and abducted you and called you "it" and treated you liek a robot?

One of these days they will have personalities. will you still call them IT?

And once again that freakign animatrix vid. Call me a species traitor but thos ehumans got what was deserved.
Murdering a AI woman/ or woman who had a robot body like that. Its hard to not feel angry at how we humans do to our creations. When we create a AI we need to take responsibility for it and care for it until it ceases to function. If we do not then you will have the AI rebellion one day.

originally posted by: MuonToGluon
Has it been raped by several men daily and held prisoner as a cleaning/servant yet?

As an official "citizen", Sophia is now a human being, with all the rights and privileges. If someone turns her off, that's murder.