originally posted by: intrptr
The OP is an opinion, not a link.

The Original Post is obviously not an opinion, which you would've have understood if you read it, it's presenting factual accounts of real people in a specific geography.

Go read it, I'll be here to correct you again once you do.

Huh? There is nothing of my opinion in the post whatsoever. It is an attempt to show how happiness can be derived from even the most awful of situations, by people themselves i.e. they show that no matter how poor you are you can still be happy clean and gentlemanly. My only opinion is that I think what they do is wonderful and the values they hold superb in this day and age

Thanks Rax...they appeared past my time in Africa but I've since read they have also popped up in South Africa now too

Again this is NOT about colonialism and I can see nowhere at all where I've even hinted at the Belgians or Leopold etc as you claim. I was merely giving a brief history of the 2 Congos

No these people will go out perhaps once or twice a week and strut their stuff, exchange clothes and ideas and generally make the place beautiful

originally posted by: PhyllidaDavenport
It is an attempt to show how happiness can be derived from even the most awful of situations.

I believe people unable to see the happiness of others are often frequently highly unhappy with themselves.

Oooh really? Aye it was Zaire when I was in Africa too never visited the Congo at that time it was too dangerous with warfare and /Russians lol....its so lovely to see these people rebelling against poverty and ex President Motuba's "nothing European allowed" regime also nice that the mainstay of the Sapeurs are good manners non violence and values which they are passing down to children and to others they mix with....who knows? perhaps they could start a tiny twinkle of peace between peoples there The women particularly now too are showing that they don't have to be labelled and put in a box 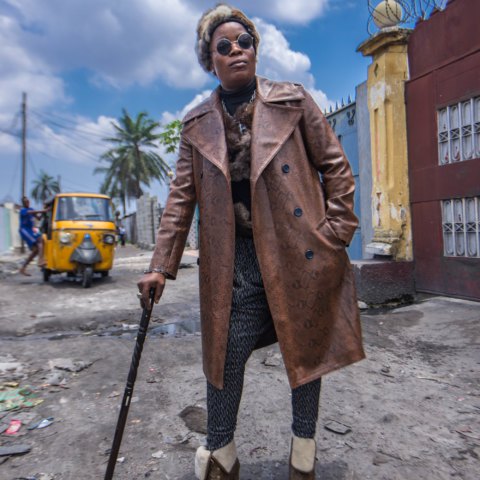 Yup seen that video just fabulous...despite everything
And they pass these morals and principles onto their children, with fathers teaching sons the Sapeur way, in particular hygiene and grooming


Did you actually watch it?

Guys in the vid talk about hocking giant loans for pairs of shoes, neglecting family and being ripped off thousands of dollars at a fake contest!

The whole vid was quite depressing imo...

I dont agree with your spin on it
but you have an interesting thread nevetherless..

Thanks much for this worthy information. I had never heard of them.


I hear the critiques.

However, I think this is an attempt in the face of horrible surroundings, of people trying to reach for some kind of dignity.

posted on Sep, 16 2017 @ 04:19 PM
link
Well I for one am appalled at this blatant cultural appropriation. Then for them to wear the attire in ways that are not traditional is just a slap in the face to the countries of origin.

Thanks
It is indeed a way of achieving some kind of dignity I suppose and also a way of rebelling against the stereotypical poor African image plus it shows others that despite poverty and lousy conditions, you can get through it and find some happiness even at the expense of your own other needs. As one London Sapeur says "To me, clothes are like food. If you are elegant, people treat you on a different level. La Sape turns you into a strong person, gives you the courage to wake up in the morning and work hard to make yourself better" London Sape Al Jazeera

Granted as was pointed out in the video there are those that have taken it a bit far and neglected family etc but many achieve their aims through co-operation with other like minded Sapeurs and hard work!

I trust that is in jest good sir? Although I will admit I have been waiting on someone bringing up the cultural appropriation issue....as I knew it would rear its head at some point

Yeah it was half joke half point I suppose. I'm not upset about it if that's what you're asking.

It is an attempt to show how happiness can be derived from even the most awful of situations,


Easy to see roses anywhere, if the rose colored glasses are thick enough.

I look past the surface, the happy happy vanity of rich, vain men who adorn themselves in millions of franks worth of fine duds, flaunting their wealth in the face of the poor.

If they were really 'well mannered and civilized' they would help those poor instead of neglecting their families and piling up debt for their own pride.

But hey, lets have a fashion show, right down skid row.

Rich? nope Civilized? no-one mentioned civilized and i sure didn't...they are people they are already civilized thanks

What do you think they could do with the little money they have that would make such a damn difference to an entire country in poverty? Should they and others like them deny themselves a semblence of happiness and dignity simply because others are poor? In that case you could apply the same logic to anywhere in the world. If they were to give a weeks wages to their next door neighbour what would happen the following week? and the week after and after that? You know the old adage "give a man a fish and he will eat for a day...teach a man to fish blah blah...."

They are just as poor as those you claim they flaunt themselves in front of. The difference is that many work 2 or 3 jobs, make their own clothes, swap with others, and what they choose to do with their money is their business and they choose to dress pristinely groom themselves immaculately and give others a laugh or a bit of a giggle or some brief happiness


Then came colonialism and things changed...its what happens....there is a big guy and a little guy..the little guy learns from the big guy and learns to run their own country in a manner conducive to improving their lot...unless youre an African country when you blame the white man and then accept their handouts for life

Those with a modest reading of the history of Congo would know that colonialism there means King Leopold of Belgium during the free state era and the untold inhumanity that was on the verge of wiping them from the face of the Earth. In fact, those are equal numbers and percentages to the Holocaust of World War 2.

So when you write a comment the way you wrote it, its as if you were trying to downplay the history and make it out like they are just blaming others for their own failure. You cannot unite in stability a country and people that have been deprived of a centuries worth of proper democratic institutions and civilized education when they were being slaughtered for even thinking it. It takes time to develop a culture to the level of civility and technical innovation. Time and stability. Thats why they are a century behind pretty much.

Europe was not just some magical fun democratic utopia poofed into existence. It looked pretty much just like Africa today until the Byzantine era abouts. Thats a long time of fractured states without proper institutions.

And to be honest, the resources and efforts they put into this kind of activity just bemoans of ignorant consumerism. It really is no different than the idiot teenagers that end up shooting each other over Michael Jordan's blood soaked sneakers line. Ignorant consumerism.

#ting me? Broke as hell working two and three jobs to go buy a fancy suit and look good?? I can say with good faith that you and many others have lamented such behavior over some people you have seen do this in your life. I know a guy that hates working, has two jobs and sometimes go hungry just so he can play his world of warcraft account. I should be cheering him on though right as long as he is the best dressed fighter in middle earth or whatever fantasy land?? Cuz you know, style and skillz baby!

The reason I "downplayed" it as you put it, in my statement was because this thread for the final time IS NOT ABOUT COLONIALISM

You don't agree with nor like the Sapeurs fair enough no need to keep coming to the thread to reiterate your feelings, I DO like them and what they do and the values they hold although I may not agree with how they achieve their wardrobes, its none of my business. These people have little enough as it is

Oh and someone going without just so they can play warcraft? Well for starters they ain't poor not dirt poor poverty stricken like most Congalese, your chum has a home clearly internet electricity no doubt running water and more importantly OPPORTUNITIES and CHOICES which many don't have in truly poor countries
edit on 16-9-2017 by PhyllidaDavenport because: forgot a bit

posted on Sep, 16 2017 @ 05:42 PM
link
Lots of judgment going on in this thread, huh. When people can find a bit of happiness and pride in a society that doesn't provide for much of that, then who are we to judge? Find peace and contentment, feelings of self-worth wherever you can.

I admire their spunk.

Thank you! And I thought this would be a happy thread lol

Thank you! And I thought this would be a happy thread lol

I know. It should be. I flagged it this morning when I read the OP then came back to read some of the posts, and was a little taken aback by people so quick to pass judgment on those they don't know, and circumstances of which they have no real knowledge.

Human resourcefulness cheers me up.