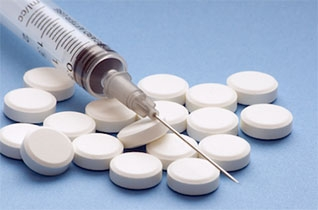 Opioid use by American men may account for one-fifth of the decline in their participation in the U.S. labor force, according to a study by Princeton University economist Alan Krueger.

“The opioid crisis and depressed labor-force participation are now intertwined in many parts of the U.S.,” Krueger, who was chief economist at the Treasury Department in the Obama administration, wrote in the study released Thursday at a Brookings Institution conference in Washington.

Krueger’s study linked county prescription rates to labor force data from the past 15 years, concluding that regional differences in prescription rates were due to variations in medical practices, not health conditions. In previous research, he found that nearly half of men in their prime worker ages not in the labor force take prescription painkillers daily.


If true, this is a remarkable statistic.

More than a year ago, my wife and I commented upon the number of opioid induced constipation drug commercials and wondered why this was such a thing.

and yet, the wildly falsified unemployment rate indicates that the US is almost at "full employment"....

This is a very important topic -thanks for sharing the info. Mind-blowing... we are witnessing a major, major crisis here :/

I think a lot of the people dropping out of the system are not only addicts but also the dealers. The greater the demand, which this epidemic has created, the more suppliers there will be.

" In previous research, he found that nearly half of men in their prime worker ages not in the labor force take prescription painkillers daily. "

I would think that these men are likely disabled, perhaps. I notice that in the article they do not address the rate of disability among this demographic. But it seems to me that if they are prescribed medicines for pain and they are unemployed...sounds like folks who are on disability, imo.

What amazes me these days is how practically every part-time employee (that is, who is not Latino) in my small town is an opiod junky, meth/crack addict or amongst the kitchen employees, alcoholic. This is an upscale, better-educated and more expensive place than most in upstate New York. Rich and poor alike are addicts though. The most successful, well-balanced couple I know can't sleep without Xanax + Ambien. Every single night they gotta have it, but other than that, they have scarcely a care or bad habit between the two of them. It's their doctors and generous insurance that enables them, and now they're totally hooked.

On less than one hand, I can count the people I know in the restaurant buisness (excepting owners, and Latinos) who don't have a substance abuse problem. And I know almost everybody here. These are the young people in their late teens to mid-twenties who were (in some cases) trying to get an education up until a year ago. And now they're working -- many of them commute to work their lousy jobs.

The owner of one of the oldest and best known restaurants has an obvious opioid addiction -- though she handles herself well enough. But I know she's copping from her employees too, because she treats some of hard-core abusers on her staff better than the employees who have no bad habits. The whole thing stinks. It starts with someone copping prescription pills, and perpetuates with the smoking of inexpensive heroin laced with synthetic fentanyl, which is becoming more and more prevalent, when prescription pills are scarce or too expensive.

Until you drive to any city gas station and have at least 1 or 2 people ask you for money...at basically any gas station in any city. Least that's been my experience...

Oh and at the grocery store and Wal-Mart and the stop light at every major intersection and most interstate exits...the list goes on and on.

Remember the age old saying: "correlation does not equal causation".

I could put together a study showing that the majority of earthquakes happen when a country song is on the top ten billboard chart, but that doesn't mean Jason Aldean is the cause of 6-8.0 quakes across the globe.

posted on Sep, 7 2017 @ 10:36 AM
link
no, low wages and poor upward mobility explain and increase in opoid use not the other way around

Skimming through the paper now, it seems that the Bloomberg article has a number of inaccuracies. From the paper:

Multiplying 0.55 by the coefficient on the interaction between opioids and the second period (.011), suggests that the increase in opioid prescriptions could account for perhaps a 0.6 percentage point decline in male labor force participation, which is 20 percent of the observed decline in this period.

Makes sense I guess.
But as the antidiluvian pointed out above, its just 6 tenths of a percent effected by these drugs.
99 percent has nothing to do with drugs.

I would bet alcohol is a much larger share.

You know when I was in high school, I went to one funeral. My great grandma died. I figured I wouldn't have to go to another funeral for a long time. But then some kids died because they were drinking and driving. Then heroin related deaths started peppering my yearly plans. In the last year I've attended so many heroin related deaths for people I thought would have been the next line of this countries engineers and scientists, that if even one more friend or related family dies my heart will probably physically break. Never would have imagined going to this many funerals for people MY age and younger because of drugs. That was not laid out in the plan for the fantasy life my parents had in mind for me and led me to bank on.

I think this kind of data will be useful in proving a point that this is a serious issue that is affecting the entire nation, not just poor areas, so that perhaps something can be done. I mean who knows, maybe NOTHING can be done, maybe the clinics or NA etc... won't ever be an overall answer, but I have hope that there is something that will solve this issue in a positive manner, one day.

I wish they had just lost their jobs and not their lives.

If you're not an addict, but you like to party please consider this: Stay the hell away from the "hard" drugs & alcohol. Please. Your family loves you, you friends love you, and if you feel you have no one, you should at least love yourself enough to not start down the path that so many have taken and died on.

posted on Sep, 7 2017 @ 11:13 AM
link
What I have observed as a chronic pain patient is this - Drs are more than happy to give you any amount to get you to stop whining and to get you out the door. I can't speak for everyone but for me, I take what I need when I need it and never more. If I took what the Drs prescribe not only would I be a zombie but potentially an addict as well. I see part of the problem with the medical community handing these out as candy without doing more to treat the root cause of pain in people.
edit on 7-9-2017 by CCKP72 because: (no reason given)

But 20% of the decline being attributed to the abuse of a single class of drugs is still nonetheless disturbing. Realize that number is across the country. In other words, some locations have a much higher number. The impacts are clearly disproportionate.

This is truly of national concern.

How do we solve this... lets think back a few decades..

A user who under supervision given their 'shot' would cost almost nothing on the tax payer. It's dirt cheap to make legally. Removing the LEO angle, the prison element, the criminal element, the organised crime element, and treat the individual as a medical patient, and not a criminal who lives within their limited means.

No single person in the world with a stable life, reliable job, or adequate family support is going to suddenly go "Gee bob, yannow what? I think I'll become a smack addict today..."

the problem is not the drug, it's the cause of the use of the drug. So look at society. Look at the world we are living in.

I've know perfectly functional opiate addicts, who for whatever reason skirted under the eye of the law. Those I've known who have overdosed and left us, suffered the adulterated product that prohibition brings. But hey they're just junkies, so they deserved it.

Almost every one on ATS who has an elderly relative in pain, who is given opiates for pain relief. But they're not considered the same, they are a medical patient.

Remove the criminal element, hard for politicians to so since they are bound by god telling them how to act, or it's otherwise political suicide, and you will soon remove the criminal behaviour associated with opiates.

Not all, no one is saying that.... but when you throw buckets of water at a tsunami caused by the war on drugs, you don't fix bugger all.

legislate, decriminalise, rehabilitate.. no one enjoys being trapped in a chemical hell.
edit on 7/9/2017 by badw0lf because: (no reason given)

Yeah, I knew something about it wasn't right because based on previous reading I done, I was pretty sure the overall decline in labor force participation over the last two decades was in the single digits and furthermore, that a significant portion of that was being linked to other factors like retiring baby boomers and increases in college enrollment.

Never confuse a dr. for a healer, and many will admit this.