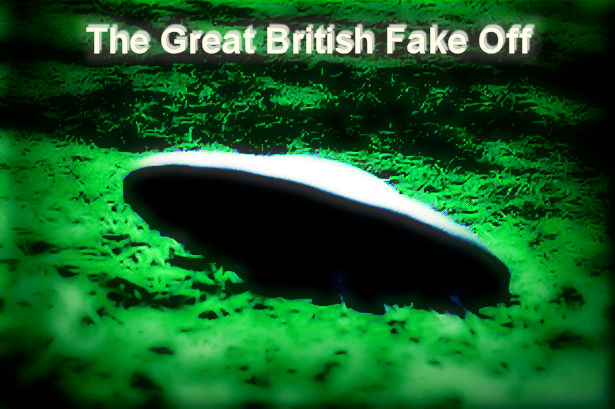 The army's southern command, four police forces, a bomb disposal unit, RAF helicopters and officers from the MoD's intelligence branch all sprang into action in the early hours of daylight to investigate as public reports began to filter through. It was not until a police bomb disposal squad examined one of the objects with portable X-ray equipment that the Ever Ready batteries inside exposed the hoax.

The plan was formulated in January 1967. But the ‘invasion plot’ was not fulfilled until later in the year. The perpetrators were 21 year old students Christopher Southall and Roger Palmer. The prank was conceived with the best of intentions — to raise money for charity. It eventually did. But the men also had another motive. They believed that there was no plan to deal with an alien invasion and wanted it to be a warning for the UK authorities to take things seriously and prepare for such an eventuality.

"We thought the government should have some sort of plan if aliens did land," said Southalll.
"So we gave them a chance to try out whatever plan they had - but they didn't have one."

The saucers were relatively small measuring 54”x 30”, just 20” deep, made from fibreglass with an added metallic sheen. Inside each of these saucers was a small loudspeaker, programmed with a freaky wailing noise when the models were disturbed. Each object just about fitted in the back of a car and the team decided to plant them along the 51.5 ‘ parallel during the early hours, between Kent and Somerset at six equidistant points.

To add to the fun. ‘alien’ jelly-like goo made from a bread dough that had been boiled at a high temperature was added to the interior. It looked like mashed human brain and smelled terrible. The police and army response unit dropped one of the saucers and blew up another leaving a number of officers sprayed with the smelly goo.

The biggest impact however was in Bromley were Cynthia Tooth was awoken by a strange noise in the night sky. She looked out of her bedroom window to see a strange light descending behind some trees. Tooth alerted the local newspaper early next morning. The remarkable coincidence had managed to push the story into the morning news bulletins.

A golf caddy named Harry Huxley found the "Bromley Saucer" whilst retrieving some lost golf balls just after daylight. But he did not report the find until his search for the golf balls had been completed!

A PC Hampton later arrived at the scene where he noted an eerie, piercing sound coming from the UFO. He radioed his station, convinced this was something extraordinary. The local police then rather naively took the saucer through Bromley back to the police station. Later the officers received a reprimand for failing to recognise that they could have contaminated the town.

In Clevedon, Somerset, a paperboy found another saucer on Dial Hill... Shortly after, a postmistress spotted one of the ‘eggs’ in a field on a farm in Welford in Berkshire.

Across the road from radar station in Berkshire an object was discovered in a local garden but failed to create any noise due to a malfunction. An engineer from the station took a look and expressed his concern. The saucer in Chippenham was found around 8am. But the one on the Isle of Sheppey was not discovered until noon.

The MoD was notified just after 9am and their main concern was that the saucers were some type of Soviet spying device or even a weapon. Despite attempts to keep things quiet the news had already broken and just a few hours later everything was revealed as a hoax.

Later that day Southall and Palmer held a press conference, admitting to the hoax:

‘We believe that flying saucers could land one day, so we landed our own to give the authorities some practice.’

Despite the initial anger at being made to look foolish the British Establishment wisely decided not to proceed with any prosecutions. It is still unclear today whether there is any policy in place to deal with an extra-terrestrial threat.

I remember that well, like the UFO's were something to behold, and if I remember it right one of them looked like a good part of it had fell off the roof of a Panda car. the goo bit, I hadn't heard of though.

BTW Patrick Moore was a bit...more than a bit of a hoaxer, he wrote a whole hoax book on meeting Venusians or similar under the pseudonym of Cedric Allingham.
edit on 3-9-2017 by smurfy because: Text.

posted on Sep, 3 2017 @ 04:21 PM
link
Can you imagine what a similar hoax by a billionaire with a teen brain would be like? I mean the number, the size and the sophistication of the 'flying saucers'.
edit on 3 9 2017 by surnamename57 because: (no reason given)

Patrick Moore was a lunar landing hoaxer too . He had the gall to call those who questioned it 'deluded' . Yeah Patrick he accused them of being exactly what they were not , on national tv .

There were quite a few cheeky pranksters in the late 60s .

posted on Sep, 3 2017 @ 05:28 PM
link
with today's technology they could fly them drone-like and land or hover them @ appropriate places.

a bit surprised no one has.